The Growing Seasons: An American Boyhood Before the War by Samuel Hynes 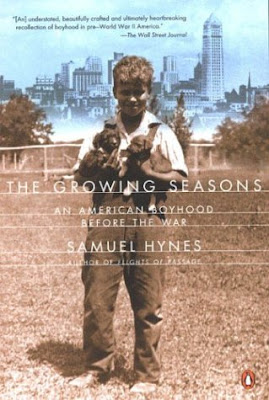 Why I read it: Just my standard fascination with American history.

Summary: Hynes graduated from high school in June 1941, in an America already consumed by the war in Europe. His would be the generation that took on the challenge of saving the world. But that story is saved for another book; The Growing Seasons brings the reader through the late 1920s and the Depression.
Hynes lost his mother when he was young, and traveled with his father and older brother as his dad sought work. Eventually, his father - a stoic, of sorts, unwilling or unable to stoop to the off-color humor of the general class of men who surrounded him - remarried, to a woman who young Samuel never fully grew to love. Life settled down in Minnesota, with older stepsiblings, all the pranks and foibles of boyhood, and eventually even the temptations of the opposite sex.
Hynes' book has an overall sadness to it, of never having enough, of never fully achieving boyhood dreams. He lived in a time of forced frugality, when folks either "made do" or were constantly frustrated over the lack of, well, just about everything. It's specifically a boy's tale, in many ways, a truly moving memoir of simpler times that were, in fact, quite difficult to live in.


My Thoughts: As I wandered through Hynes' well-written early life story, I drew parallels to my own, yet saw many lines that never met, not even out over the horizon. For the first time in my life, I've now read about someone who skipped a grade in school as I did; although he gradudated in 1941, he was too young to go off and fight immediately, as he was 16. I graduated two months after my 17th birthday. He talks of always being a step behind, socially. I was there.


But, growing up on a peninsula jutting into Boston Harbor, I don't think I can quite fathom what life in farm country is, or was, like. My grandfather had a garden, one that we thought was enormous as kids, but it would have been just that - a kitchen garden - on the farms on which Samuel spent a summer or two as his dad tried to raise money for the family. ANd he moved from there into the heart of a city. My life has been strictly suburban.
I, too, lost a parent early, but not to death: to divorce. I know what it's like to live with one and not the other. The only difference is that when I was of age and out of the range of court-ordered visitation restrictions, I got mine back. Poor Samuel never did. And he's right, stepmoms and stepdads never fill the void.
To me, the most unfathomable aspect of Sam Hynes' young life was watching his classmates leave for and temporarily return from military life. I just cannot imagine seeing my friends walk off to war knowing that some, many, most would never come back. I suppose that if I grew up in that age, I, too, would have followed Samuel's path into the military. But modern perceptions of war are altered greatly from those of the past, and service in uniform represents a lack of freedom to many who would today be giving up their bountiful, materialistic existences, rather than gaining the tools of survival as they did in the Depression. Back then a roof and three squares a day beat not having a job and forever wondering where the next bit of food would come from.
Posted by John Galluzzo at 4:35 AM No comments: