The Tipping Point: How Little Things Can Make a Big Difference by Malcolm Gladwell 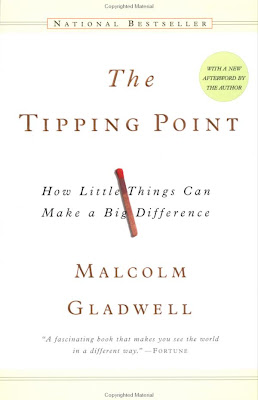 Why I read it: Gladwell was a hot author at the time, and figured I'd give him a read.

Summary: Marketing for the 21st century will be mostly word-of-mouth, as we've reached the saturation point with telemarketing, e-mailed ads, TV commercials and magazine spreads. We need to identify how rumors spread and insert ourseves into the chain.


My Thoughts: In 1996, I was working for Champs, a sporting goods and gear store. We had the whole gamut, from Nike to Reebok to Adidas, baseball bats to hockey sticks to soccer balls. Like many a red-blooded young American male, I had my major sports down pat; I had to learn the rules and equipment for lacrosse, which swim goggles worked best, etc. But even they were traditional American athletic pursuits.


But there was another, foreign world intruding on our baseball-football-basketball turf. It was the infancy of the X-Games, the rise of the skateboarding culture. Somehow it made its way onto our store shelves. But it never seemed to be in the right place.


I don't think I ever sold a pair of Airwalks among the hundreds of pairs of shoes I fitted onto the feet of our customers. I don't think I ever fielded a question about them, despite the fact I knew the product inside and out. And it had nothing to do with the fact that the Air Jordan craze was at its height. There just was no market for Airwalks at our store. They sat on the shelves, a lonely specimen or two surrounded by the rubber shoe versions of Deion Sanders, Jason Kidd and Allen Iverson. Airwalk's marketing reached our part of the country, but at least in this case fell on deaf ears.


Gladwell brings up the Airwalk rise and fall as a study in word-of-mouth marketing success. A small company focusing on California skateboarder lifestyle pushed its way east and around the world, became ridiculously successful for two years, then was gone. He gives reasons for its collapse, lessons learned by the company, but he misses one point that only a salesman would know. Although they were advertised everywhere, shipped everywhere, they didn't sell everywhere. Perhaps suburban Massachusetts was just too far away from the culture of California, physically and spiritually. Perhaps they sold in other stores in the region; they were just too much of a stretch at Champs, as far as I could see. They didn't belong to that store's identity.


The lesson of The Tipping Point is recognizing where one falls in the world of innovators, news dissenminators and consumers and figuring out how to find and utilize the rest of the network to spread the word about the good we do or offer. Let's face it - we're all in business of one kind or another, and we can all use another dollar, another engaged mind to further our cause, be it for profit or not-for-profit. We have to find out how to reach that Tipping Point where an idea takes off, and, conversely, how to avoid the next one, where our idea fails through oversaturation, overextension, etc.


Taking the lessons of this book means stepping out of the bounds of the way we normally, traditionally think. That's hard for some people, too easy for others, but somewhere in the midde lies success. I work for a nature conservancy. Where should I go to find my audience? Schools? Birdwatchers' clubs? Sure, but they will only take me so far. Or will I find that our conservation message must flow through a supermarket to reach that next group of people who haven't yet discovered they have a passion for the environment that can be satisfied through naure walks and other outings with our leaders?


I have my ideas. Do you have yours?
Posted by John Galluzzo at 9:06 AM No comments:

Home Game: An Accidental Guide to Fatherhood by Michael Lewis 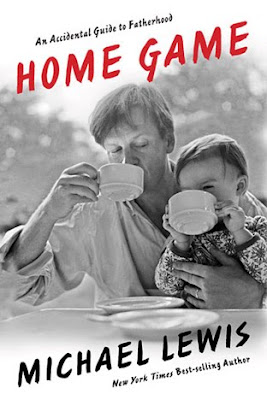 Why I read it: Christmas gift, and I had read Moneyball.

Summary: Michael Lewis, better known as the author of Moneyball and The Blind Side, also one of the country's top finance writers, tackles the story of his own fatherhood foibles trough the journals he wrote during the formative years of his children Quinn, Dixie and Walker.


My Thoughts: I'm just twenty months into this fatherhood thing, but I can certainly see what Lewis is talking about.


While there are some things I will never relate to in his book - like dropping everything to live in Paris for a while, or setting up permanent camp in Berkeley, California; we just don't have that sort of financial freedom - a lot more hits very close to what I call home in suburban Boston. Lewis brings up the situations that a new dad goes through, like attempting to soothe a baby with a superhuman capacity to scream and cry, and ponders his own reactions to such distressing situations. Do all fathers really take these things in stride, or are they just, like him, putting on a face for show, while secretly thinking about what the consequences would be if he simply placed the child in his crib and ran into the wilderness for good?


The transformation to fatherhood from the freedom of male youth is a shock to the ego. Teenage boys don't spend their time seeking out cousins and young aunts with babies so they can hold them, feed them and change them. They're skills that just are not inherent in a young man. They've been told most of their lives, in fact, to make sure they don't have kids until the right time comes. Why should they spend their time coddling and cooing a baby, when there are video games to play, sports to watch, beer to drink and women to chase (sometimes all at the same time)? During the teens and early twenties, babies are simply not on the radar screen.


Yet, the change occurs, sometimes subconsciously. Lewis refers to a movie in which there is an abduction scene, a child stolen from a public pool. Three years previously, to him, it would simply have been a plot twist. Now, with a youngster at home, the thought puts his gut into a twist. He's right. I read a story today about a man in South Carolina arrested on the disappearance of his two-year-old, and it turned my stomach.


The growth starts there. A father is a juggler, tryng to keep everybody happy at all times. Lewis doesn't even get into extended families and holidays, and he has no need to. Doing his share of the parenting of three children while attempting to maintain a career as a writer is enough to fill a book. There are hospital visits for all involved, children to soothe in the face of loss of attention from a parent during the birth of a new sibling, overnight camping trips, lack of sleep and more.

If this book is a guide, as the title states, then perhaps the main lesson to be learned is to approach it all with humor, or, at least, to know that what you go through as a new father will be laughed at later on. Hopefully by you.
Posted by John Galluzzo at 12:17 PM No comments:

The Food of a Younger Land by Mark Kurlansky 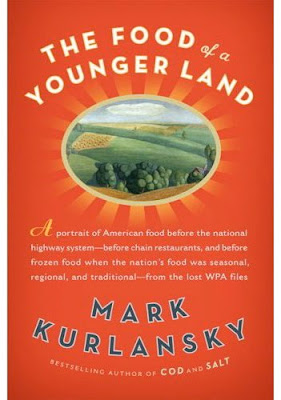 Why I read it: Already read Cod, and I've always found the regionalization of trends in the U.S. interesting.

Summary: Kurlansky, author of Cod and Salt, among others, found an unpublished manuscript - or at least the barebones makings of one - of a Depression era Federal Writers' Project project and has edited it down to the current book. America Eats was supposed to be a snapshot of the American dinner table in the 1930s. The Food of a Younger Land takes that snapshot and photoshops it seventy years in the future.


My Thoughts: Stumbling across a lost manuscript can be, for a writer, a magical moment. Thoughts race, with the ultimate winning notion being, "what can I do with this?" Can it be published as is? Can I expound upon it? Can I be the one who brings it to light after all these years?


In many cases, there's a reason why the book never saw that light. It's incomplete. It's incorrect. The author quarreled with a publisher or an editor, and scrapped the project in disgust. In this case, war got in the way. The Depression ended, federal funds were diverted away from America Eats and into war causes. The book vanished into a pile of similar documents, to gather dust for eternity.


But Kurlansky has resurrected America Eats, and has given us exactly what its creators intended: a picture of that Depression era dinner table. And think about it! In the 1930s, there was no interstate highway system. Read: there was no fast food. Americans ate what they ate locally in those days, and nowhere was there a chain restaurant recognizable to someone in Florida as well as someone in Washington State. Vermonters ate pancakes and sausages, Kentuckians quarreled over the proper way to make a mint julep, Oregonians struggled with geoducks, an southerners apparently poured Worcestershire sauce into everything.


If there is one drawback to the book, it's that it's incomplete, through no fault of Kurlansky's. Certain states just never did their fair share. Massachusetts and Missouri top that list. Of course, baked beans make the grade, complete with the reason for their deep ties to New England (religion - you could cook them on Saturday and avoid work on Sunday), but beyond that, my home state is barely touched.


Kurlansky adds not only gastronomic history to the book, but has researched the writers as well. Some famous names, like Eudora Welty, are here, but many times the writers are as anonoymous as...well, I don't know who's anonymous. I guess if I knew them, they wouldn't be anonymous. One thing to note is the inclusion of a section on the Basques in Iowa. My suspicion is that is how Kurlansky found the manuscript in the first place, he being the writer of an acclaimed book on the subject of those people in their native land in the Pyrenees.


It's a long journey through The Food of a Younger Land, but then, it's a big country. Food history is cultural history, and this book proves how regionally diverse we once were in America, from Long Island hassenpfeffer to Montana fried beaver tail.
Posted by John Galluzzo at 7:55 PM No comments: