Creating One Happy Island: The Story of Aruba's Tourism by Evert Bongers 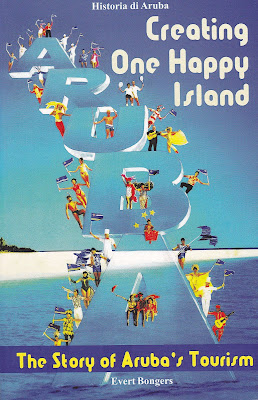 Why I read it: I've vacationed in Aruba several times, and have always wanted to know more about the history of the island.

Summary: The author covers the story of the transition the people of Aruba made from their oil refinery heydays to the current age of tourism. He interviews the key leaders in the change, profiles the premier properties and discusses the ups and downs of the island's last half century.


My Thoughts: I took a fifteen-year hiatus from Aruba, not necessaily by personal choice. Finances have always had a say in where I go on vacation, and sometimes whether or not I go on vacation at all. I just got back yesterday from my third visit.


The island itself is only 19 miles long and 6 miles wide, a thin sliver off the northern coast of Venezuela. It's arid, rugged and windblown. But a small piece of the island has what many Americans (among people from many other nationalities) think of when they consider a week away from home: sand, sunshine and salt water.


Aruba came late to the table, but has certainly taken its share of its just desserts. Bongers outlines the important moments in Aruba's tourism history, the opening of the earliest hotels, the formation of the leading tourism associations, and more. He traces the subject's history from 64 hotel rooms and fewer than 1000 visitors in 1956 to the nearly 7500 rooms and more than 700,000 annual visitors today.


Importantly, Bongers does not shy away from the tougher moments in Aruba's history. Rioting in support of Aruba's quest for "status aparte" from the ruling government of Curacao (seeking independent nation status within the Dutch colonial system) led to four days of near-panic for thousands of tourists on island in 1976. The effects of September 11, 2001, had barely begun to fade when the Holloway murder case negatively impacted tourism in 2005, and just as that momentum began to move in reverse gear, the world economic crisis of 2008 left even more hotel rooms empty.


For a visitor, travel to Aruba is an online hotel booking, a search for a flight and joyous packing of skimpy bathing costumes and tubes of sunblock. But tourism has meant so much more for Arubans. During peak times, it's mant 0% unemployment. During bad times, it's meant major population shifts and even exoduses. Behind the scenes there have been hotels that were never built, projects stopped mid-construction, and today, the controversy of another yet hotel being built after the government had informed its of a halt to new projects. It's a fluid, dynamic entity, one which Bongers has frozen and captured for us all to understand.


I feel much better as a visitor to the island after having read this book. I feel like I can now see beyond the glitzy hotel facades and directly into their pasts.
Posted by John Galluzzo at 11:32 AM No comments:

Flights of Passage: Recollections of a World War II Aviator by Samuel Hynes 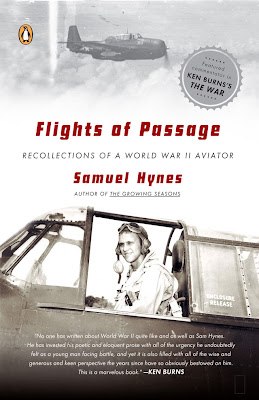 Why I read it: Finished the set.

Summary: Hynes recounts his World War II days, training to fly and fight for the Marines, eventually joining combat in a dive bomber in the Pacific during the last months of the war.


My Thoughts: The melancholy tone from Hynes' first book, The Growing Seasons, returned with this follow-up tome. World War II, he will have us know, was not what the newsreels showed us, not what the generic press releass to local newspapers claimed it to be.


His World War II was one of the temporary friendships forged by war. Friends separated to join the various services. New friends parted during training, as some washed out, and assignments scattered men to all corners of the country for further refininement. Death took more. Camaraderie came with a good bottle of whiskey, in a bawdy song sung at a seedy bar. Morale was at its highest when units formed and solidified, and entered combat together.


Hynes' war was one of tests, with a capital "T." Tests of manhood included the conquering of women, the first shot fired in anger. He constantly wondered whether or not he would pass life's tests. In reality, he was his own harsh grader.


His gently flowing prose leads one from his midwestern home to the Plains to the southeast to California and out to the weather beaten rocks of the Pacific. He pulls the veil off the blankly smiling facade that is pre-Vietnam America. Men chased women, sometimes got them, and talked rudely about their experiences. There were dirty jokes in the 1940s. Young men awash in a sea of alcohol with nothing to do but wait to die will do what we all know young men do: get drunk, fight, womanize.


As a flight officer, though, the nineteen-year-old Hynes learned responsibility. He even got married just before shipping out, accepting the terms of that test, knowing he didn't know if he would come back to support the woman he believed he loved, though he admitted he really didn't even know her that well.


By the end of the war, when he had lost friends, including some very close to him, he experienced the soulless callousness combat bears. Men crashed and died before his eyes, and movies paused only long enough for the darkness to re-envelop the burning crash sites.


Only the survivors could grab that ultimate title of lifelong friend. The men who died during the war had their lives cut short in the many stupid ways men die during times of political upheaval, and never got the chance to let their friendships mature.


The Growing Seasons and Flights of Passage should be read back-to-back and are, in my opinion, destined to be all-time classic works of American history. They are among the best books I have ever read on any subject.
Posted by John Galluzzo at 12:46 PM No comments: