I Am Third by Gale Sayers 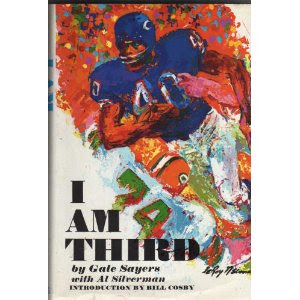 Why I read it: Saw Brian's Song as a kid and always had great respect for Gale Sayers; wanted to see if it was well-founded.

Summary: Meant to be the story of a major professional football star recovering from a devastating knee injury, the book became the inspiration for the movie Brian's Song. But that was just one chapter in the book, a short story in a longer tale that rises from the ghetto to the top of the National Football League, from shy insignificance to super sports stardom.


My Thoughts: I'd have to be an idiot to think that after forty years, I could add anything to the discussion on this book. But I will say one thing; my reading of I Am Third was long overdue.


I was introduced to the Gale Sayers/Brian Piccolo story as a middle schooler, when we were shown the movie on a reel-to-reel projector. And if you haven't seen it, you've missed one of the most important movies of the twentieth century. So, before I picked up the book - long before - I knew the Hollywood story. I had set feelings about Gale Sayers. I was hopeful that they would be reinforced by the book. That's always a dangerous proposition, to trust Hollywood to have told you the truth.


Gladly, I was not disappointed. Sayers' writing style rings honest, which is all the more saddening. Having grown up in a middle class family, never rich, but never dirt poor, I've never been able to imagine the level of poverty the likes of which Sayers lived through in his early years. Descriptions of life without heat, without food, without the basics, including, at times, members of his family, make his accomplishments in life all the more amazing.


Again, to comment broadly on I Am Third at this point puts me at the end of a very long line. But if I could say one word about this book, it would be inspiration. Gale Sayers was, and is much more than the character Billy Dee Williams portrayed in Brian's Song.


Thank you, Hollywood, for not screwing this one up.
Posted by John Galluzzo at 5:40 PM 2 comments: 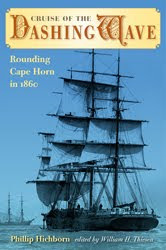 Why I read it: I know the editor.

Summary: Ship's carpenter Philip Hichborn, a Cambridge, Massachusetts, native, shipped out to take on a new job in San Francisco, en route to a fantastic career as a naval architect. Along the way he kept a journal that stands out from the typical ship's recordings. He hates the captain, and has no problem writing his thoughts about that fact. He constantly discusses his place on the ship in relation to the mates and the rest of the crew. His journal goes beyond dates and latitudes and into social aspects of life aboard a ship that most accounts leave out.


My Thoughts: Could I do it?


I just don't know. The passage of the Dashing Wave from Boston to San Francisco in 1860 took 143 days, nearly five months. There were becalmed times, and winter storms. But I don't know if that would have been my problem. I live in New England. I revel in the instability of nature.


People of the 1800s were tougher than I am, and there's nothing wrong in admitting it. Philip Hichborn was born in to a world without daily showers, and lived in a world - for at least 143 days - in which he had to constantly prove his manliness. He expected to get into fights, and his anger poured out of his head and into his journal. Showering is, of course, just a metaphor. I just don't know if I could stand the life.


Hichborn was an intelligent man, that much shines through. He was one of two boys to graduate from Cambridge schools in 1855, and that puts him in an odd place when he boards the ship. He is, as far as one can tell, more learned, more literate than most of the men around him, though he does discuss swapping reading material with one of the mates. He was, in some ways, a fish out of water.


Living the passage through the eyes of one who was there, who drifted at sea knowing that the 1860 American presidential race had come and gone, and that he had no idea when he would find out who the winner was, was certainly an eye-opening experience. After all, the study of life is best attacked through varying perspectives. Ultimately, I'm glad Hichborn wrote the journal, and even happier that Bill Thiesen brought it back to life a century and a half after the journey.
Posted by John Galluzzo at 5:44 PM No comments: