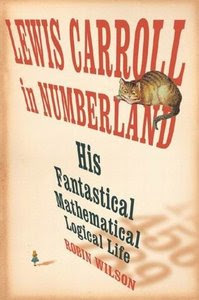 Why I read it: Me and numbers, we're like this (fingers crossed).

Summary: He wasn't just about Alice in Wonderland; no, Charles Dodgson, the real man behind the pseudonym lived a real life almost as exciting as the one he created for his friend Alice. And it had to do with math.


My Thoughts: I found, immediately upon picking up the book, that I never, ever want to read Alice in Wonderland or Through the Looking-Glass. Sounds harsh, I know. And it probably is, me just being a generationist. Perhaps Dodgson's writing style was simply a product of the time in which he lived, the Victorian Age, but to me, it was annoying as hell. Every character that poor little Alice meets in her "adventures underground," as the original title described them, remonsrates her on some point of logic in a smarmy voice.


On the other hand, I'd gladly read more by Robin Wilson, whether he's writing about Dodgson or not. He shows us the world of the author as seen through math-colored glasses. And it turns out that Dodgson was obsessed with mathematics in its many forms. He designed his own logic problems for publication, figured out how to calculate the day of the week for any date in history in his head, and taught a generation of both willing and unwilling students everything he knew.


The book is heavy on math itself, proofs, theorems, Euclid, all that fun. Certain sections are not for the faint of heart, or the geometrically-challenged. But if you are ready to think with the logical part of your brain, to have paper and pencil ready, this book is for you.


Some passages in the book are laugh-out-loud funny. One quote from Dodgson mentions how he tried to educate the child of a friend at a dinner table, asking her to help figure out a problem, only to have her scream to her mother, "I can't do it! I can't do it!" One can almost picture the look of shock and bewildement on the face of Dodgson. Another section tells of a famous incident (which may have never happened) in which Queen Victoria, after reading Alice in Woderland, told her underlings to bring her the next book that Dodgson wrote, as she was excited to read it; that turned out to be An Elementary Treatment on Determinants.


The basic premise of the book is to expose the other side of Lewis Carroll, and the author does that trick tremendously well. I was completely unaware of how extensive his math background was, but now, so much of Alice in Wonderland makes perfect sense. So much of his life was preoccupied with math that it easily bled over to Alice and more.


I guess that now that I've read this book, I'll have to read Alice. But I swear, if the smarminess overwhelms my enjoyment, I'll end up throwing the book down a rabbit hole.
Posted by John Galluzzo at 8:44 PM No comments: 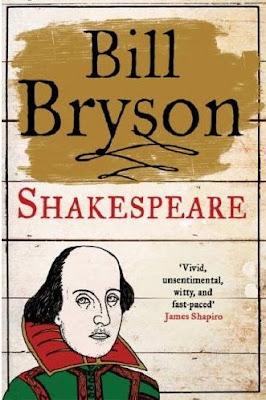 Why I read it: Shakespeare and Bryson: two of my favorite authors.

Summary: Do we know who Shakespeare really was? Bryson corrals the facts, the legends and the outright lies in an attempt to reconstruct the poorly understood life of the most successful practitioner of the English language.


My Thoughts: He's one of those historical personalities for whom we need use only his surname. There is, there was, no other Shakespeare worthy of contemplating when the name is spoken. All names other than William sound like jokes. Ted Shakespeare? Bob Shakespeare? Perish the thoughts.


Yet, there had to have been more, if only to flesh out William's life: father, mother, siblings, wife, kids, grandparents, grandchildren. Who were they? What can their lives tell us about the master of the Elizabethan stage?


The fact is that we know very little about the man who penned Much Ado About Nothing, The Tempest and Romeo and Juliet. And that fact seems amazing, when we consider that he is attributed with adding about 10% of the words we use today in modern English. His plays each could generate more than 100 new words, or lexemes, for the language, some of which stuck, some of which did not.


We have some legal documents, most concerning birth, marriage and death, but beyond that, we're lost when it comes to defining the life of William Shakespeare. Did he write the plays attributed to him? Five thousand publications over the past few centuries have attempted to prove that any one of 50 other individuals may have "written Shakespeare." Are the answers to the questions in his life in the text of his plays in code form? Did he try to speak to us about himself through his sonnets, or the dedications that preceded his works?


There are gaps in time that lead even the most level-headed historian down erroneous paths. Did his absence from any kind of English record in 1592-1593, plague years in the city of London, and the emergence of plays written with Italian backgrounds in the coming years mean that he took a Mediterreanean sojourn during that time? As an historian, and an Italian, I found that notion intriguing, and would love to find the answer. But where does one start? Venice (as in The Merchant of)? Verona? Did Italian inn keepers keep good records back then, and have any of them survived? Can anybody fly me to Italy so I can start this quest?


This book is slightly off the typical Bill Bryson path, in that his witty indignation is tamed by the topic and the format. Indignation is borne of frustration and disbelief with human actions, and while there are many, many people through time who have messed with the legacy of the most celebrated playwright of all, critics who are deserved of a good old'fashioned Bryon tongue lashing, the author refrains from letting fly. Instead, we get a technical, dissecting look at the facts, with classic Bryson humor sprinkled here and there as warranted.


In the end, we know a lot more about Shakespeare, but find that for every answer we now have, there are ten more questions.
Posted by John Galluzzo at 5:35 AM No comments: