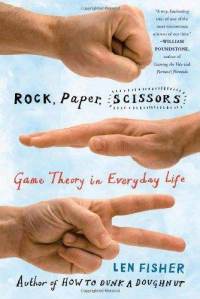 Summary: Can the world's problems be solved through game theory?

My Thoughts: Yes. Yes they can.

We all played it as kids, and we all threw rock way more than we should have. Perhaps that's just an American thing, where we've learned that the best way to victory is to pummel people with our fists like Superman or Hulk Hogan or Joe Louis. And we all understood the game. Think that you're outthinking your opponent. Predict what he or she is going to throw, and counter it. The only thing more frustrating as a kid was "bucking up." I got evens!

In Rock, Paper, Scissors, Len Fisher dumbs down game theory for us by speaking in our language, that of movies and television and sports heroes and the other bits of "culture" in which we dwell. He diagrams it all out for us logically. If A reacts this way and B reacts this way, C occurs. By breaking down the major conflicts that can arise between opposing parties - wives and husbands, nuclear nations, interplanetary combatants (OK, that's my extrapolation), the members of a group supposedly pulling for a common good - he shows us how we can work through them, then ultimately delivers a list of hints on how to avoid or settle arguments with the best possible consequences.

And lord knows the world needs it. You may be stuck in a Prisnor's Dilemma right now, or wrestling with the Tragedy of the Commons. How will you reach that perfect conclusion? Well, I can tell you one thing. Don't throw rock.
Posted by John Galluzzo at 10:04 AM No comments:

Of Mice and Men by John Steinbeck 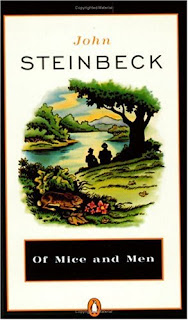 Why I read it: A going-out-of-business sale at my local Borders.

Summary: An American classic; George and Lennie struggling to keep the American dream alive during the Great Depression.

My Thoughts: There are certain books we avoid as high schoolers, that list that English teachers gush over. The Fountainhead. Wuthering Heights. Anything by a Bronte. In most cases, attempting to get anyone between the ages of 13 and 18 to appreciate the beauty of classic literature is an exercise in futility.

Somewhere down the line, though, the connection is made. The realization that you may have missed out on a cornerstone of the American experience (or, perhaps, British) hits you. You start to look at the list. Read that, missed that, never read that...haven't even heard of that one. Recognition turns to slight shame, then sudden desire. You dive into the classics.

And now it all makes sense. Bugs Bunny once ran into an abominable snow monster who delivered a famous line that stuck with me through my childhood, and apparently into the extended childhood that is my current life. He picks up Bugs and locks him into a bear hug: "I will love him and hug him and call him George!" Unknowing of his own strength, he practically crushes Bugs. (*Slap to the forehead*). He's Lennie! It took me until 40 years of age to figure that out?

The novel is a place of broken dreams for a failed wannabe actress, an African-American forever locked in an incongruous place, a one-handed ranch hand who knows he will someday soon be deemed useless and discarded, wanderers living only in the present. As much as they all dream about a future, it doesn't exist.

George and Lennie are bound together for life. George promised to bring Lennie with him through life, to protect him, and finds that most of the time he has to protect him from himself. Steinbeck's portrayals are brutal, as were the times in which the story is set. Nobody gets any more than their fair shake.

So yes, I'm there. I've got the list, and it's time to catch up with the rest of society.
Posted by John Galluzzo at 9:45 AM No comments: 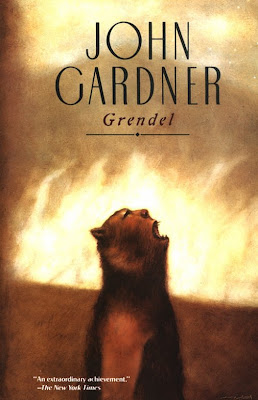 Why I read it: Read Beowulf, wanted to hear the second opinion.

Summary: Beowulf, from the monster's point of view.


My Thoughts: This book is a fantastic achievement. Taking the opposite point of view of any story is always fascinating - see the recent movies on Iwo Jima, one from the American side, one from the Japanese, for example - and it's something that should be done more often. It's only when we step out of the bounds of our own thoughtways that we truly understand the world. Unfortunately, most of us never get there.


More, though, needs to be said of Gardner's work itself. He creates a singular, unique voice in Grendel, who tells the story from the first person, and, as you might imagine, in doing so he had two tasks. First, he had to be true to Beowulf and its many themes and characters. To do so, he sends Grendel out as a lurker, always watching from the shadows. He witnesses conversations that shape the story, and shape the very way Grendel approaches his interactions with the Scylds and, later, the Geats. Second, he must fill the gaps, in place and time, where Grendel is alone, with his mother, with the dragon.


Gardner's great point with this work, though, is about society's downfalls. Grendel debates, mostly internally, the institutions of government, war and religion. In the end, he warns one and all, with his dying breath, to look into the mirror, and realize that he was not the only monster.


I bought this book in the literature section of a closing Borders store, at 60% off. Had I known it was this good, I would have bought it earlier at full price, just to give the author his due.

Posted by John Galluzzo at 9:45 AM No comments: 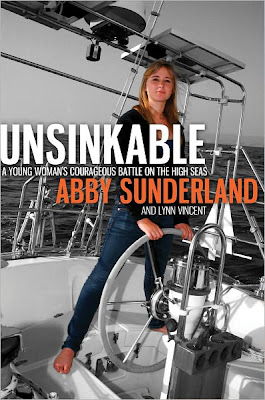 Why I read it: Maritime history is as much a vocation for me as an avocation; if the sea wets it, I'll read it.

Summary: The author, at 13, sets a goal, to sail around the world single-handedly. By doing so she has the chance to become the youngest person in the history of the world to do so. Attacked by critics, but bolstered by supporters, she sets out on her first attempt at a "solo-round."


My Thoughts: I can remember the frustration of being told "You're too young. You have to wait." There's a point in all of our lives when we hear those words. But there's a difference. I produced. I wrote articles for newspapers. I slaved over my historical research. My name, and work, faceless, appeared in print. But when it came time to meet someone face to face, to apply for a job, I was often told, that no, I couldn't do the job, I was too young.


Society has just never come to grasp with the fact that youth can outperform wisdom from time to time, that the young sometimes have what it takes to do amazing things that older people cannot. So it was with Abby. She set sail and did her absolute best to shut the critics up. She did n't make it all the way around the world, but she made in more than 12,000 miles before an Indian Ocean storm dismasted her sailboat during a rollover. In the end, it wasn't age, wisdom or contrariness that won the day, it was Mother Nature.


Good for you, Abby. You're a role model for the young; don't ever let the world say you can't try.

Posted by John Galluzzo at 10:25 AM No comments: 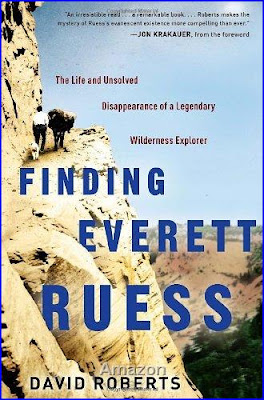 Why I read it: Unending fascination with the open spaces of the American West.


Summary: Bull-headed teen Everett Ruess heads into the southwestern desert with dreams of spending a life wandering and creating works of art based on the landscapes he finds. Ultimately, he disappears, and a cult builds around his story. Roberts brings us from his first foray to his last, then from the first search party to the modern day.


It might be sacrilege to say it, but I think this book has given me too much to think about. Had I discovered Everett Ruess the way that millions of others have, through small excerpts from his letters and diaries, philosophical words that examine the beauty of the American southwest and man's place in it, I would have found him benign, perhaps even a bit of a kindred soul. But the tale that Roberts tells was not meant to be a sugar coating, it was designed to exhibit every possible clue as to his final whereabouts.


Toward that end, we get more of his words than are typically printed. We learn of his relationships with friends, the way he treats his parents and brother, the night he beat his dog until it ran into the desert for good, what he thought of the people of the southwest. He was young. He was pig-headed. He treated people poorly when he felt like it - at least in his written words. He was an unfortunate victim of the fieriness of youth.


Still, the journeys are fascinating, both alongside Ruess and the people who have searched for him. Roberts made an attempt to find him, and even thought he had, but Ruess slipped away once again, and today remains one of the American southwest's most elusive figures.

Posted by John Galluzzo at 9:52 AM No comments: