How to Survive the Titanic or the Sinking of J. Bruce Ismay by Frances Wilson 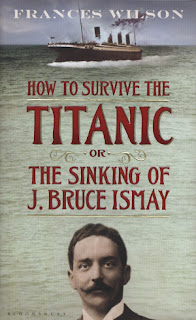 Why I read it: Centennial of the event, plus, hey, it's maritime history.

Summary: The Titanic disaster as examined through the life of the White Star Line owner.

My Thoughts: Thank god it wasn't me.

What would you do? You're the head of the firm that owns the ship that's going down on its maiden voyage, the largest moving thing on earth. You see an open spot on a lifeboat and know that by taking it you can live to fight another day. But you know that there are not enough lifeboats to fit every passenger - the Titanic sinking? Unthinkable! - and undoubtedly people will die.

And therein is the beauty of the approach taken in this book. The great ethic and moral question presented to us all must be answered. In the boat, or not?

Moreover, though, Wilson takes another unexpected course, winding us through the story of Lord Jim and a similar fictitious tragedy that was published 12 years before Titanic. With Lord Jim, Ismay hasd a kindred spirit, one whom he probably never met in the pages of Joseph Conrad's book.

Drawing heavily from inquiry testimonials, Wilson conducts her own cross-examination of Ismay, showing his inconsistencies and the muddiness of the final moments aboard the ship. Did he help others into lifeboats, or did he just race for his own seat? And the inquiries themselves! When Ismay stood up to questioning, it ultimately was aimed at finding out why, when others had died, did he live? Any good captain goes down with his ship (and he did). But what of the owner?

What would you do?
Posted by John Galluzzo at 11:24 AM No comments:

Arctic Autumn: A Journey to Season's Edge by Pete Dunne

Why I read it: A personal fascination with the coldest regions on the planet, plus Dunne has a menu full of books I should be reading.

Summary: Dunne parallels themes from fall nature explorations of the arctic region with the autumn of his life.

My Thoughts: Let's get it out of the way - I'm not a big fan of Dunne's writing style in this book. But I can work around that for the important messages he is attempting to deliver.

Unfortunately, we're getting to the point where folks are seeing the plight of the polar bear as cliche. I have the fantastic luck to work in the nature field full time, and can tell you that, no pun intended, the polar bear is just the tip of the iceberg. Changes that should take millenia are taking centuries, and those that should take centuries are taking decades. The planet is heating up, and we are facing mass extinctions as animals genetically unready to adapt are being forced out of habitats and climates they need.

Dunne takes the life stories of several species, of caribou, of geese, of songbirds, and, ultimately, of polar bears, and shows how we, even in the deepest reaches of the north, have already affected their lives. Oil drilling, national defense, hunting and so much more has already taken its toll on one of the world's final natural frontiers. The 55-gallon drum is now the "state flower" of Alaska, left behind when plans called for mobilization during the Cold War, but did not provide for cleanup when operations concluded.

In his typically comical way, Dunne diverts to topics like the ongoing struggle between a birder and a nature photographer (read: him and his wife) and the relative slovenliness of a group of men gathered together in the far north to track elusive bird species. He concludes that what "tidy" means depends on whether you're male or female.

But these tales are, simply diversions in an otherwise poignant book. It's sad, but here's yet another title that shows us what we've wrought, and asks us to examine our own vanity, as life on earth as we know it changes before our eyes.
Posted by John Galluzzo at 10:42 AM No comments: