My Life as an Experiment by A.J. Jacobs 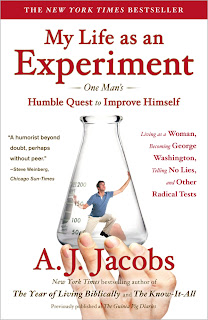 Why I read it: Running down all the Jacobs books.

My Thoughts: On one level, one might think that Jacobs was a neglected kid, starving for attention. Each of his experiments - living like George Washington for 30 days, outsourcing his life, etc. - might be seen as a cry for help, an attempt to lure in a psychiatrist to unravel layers of mental, physical, emotional and drug abuse.

I think what we have in A.J. Jacobs is a man just seriously interested in the world around him, and his creative talents have allowed him the opportunity to play with his own life in ways of which most others only dream. Who has time to think rationally? or speak honestly?

Perhaps I'm, speaking in defense of A.J. because I feel a kindred connection to him. Let's face it - in 2009, I took a 30-minute walk every single day in a different place. In 2011, I took a nature walk in each of the 351 towns in Massachusetts. I live to test myself. And I have other plans for the future. Believe me, once you've done one such experiment, you start thinking, "What's next?" A.J. is just in the self-flagellation loop, and it's going to be extremely hard to get out of it.

Especially now that there's a TV series being developed about his experimental life. Go, A.J., go.
Posted by John Galluzzo at 7:36 AM No comments:

The Teammates: A Portrait of a Friendship by David Halberstam 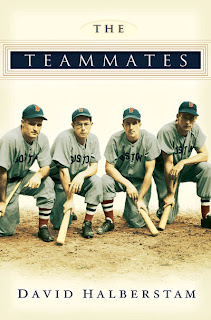 Why I read it: Baseball history, Red Sox history, and I'm from Boston.

Summary: Johnny Pesky and Dominic DiMaggio take one final ride from Massachusetts to Florida together by car, to see their old teammate, Ted Williams, before he passes on.

My Thoughts: I'm glad that David Halberstam stuck with it. He could have given up on the Red Sox of the 1940s after finishing Summer of '49, but stayed in contact with the subjects of that book, and came back around to tell this tale.

I have no idea what it is that makes me a fan of old-time baseball. I read Summer of '49 with reverence - probably a measure of how good a writer Halberstam was - and felt when I finished like I did at the end of James Clavell's Shogun. I didn't want the story to end. I wanted to continue following the lives of the people involved. Somehow, I became nostalgic for an age I never knew.

Perhaps there's genetic memory involved. Perhaps the stories my dad told me when I was a kid had seeped into my psyche. He watched Ted Williams. Johnny Pesky sat on the Red Sox bench for most of my baseball-watching life. Perhaps that has something to do with it. I don't know.

Halberstam's "little book," as her termed it, is a beautiful one, reaching beyond the foul lines and bleacher seats and into the friendship shared by the three ballplayers mentioned above and their teammate Bobby Doerr, who, living on the opposite coast, could not make the trip. It's a classic tale of aging, of losing faculties and abilities in ways that seem impossible. Ted Williams was always strong and quick - how did he end up in a wheelchair, unable to stay awake for long periods of time? But if the physical was gone, the mental lived on. He could still recall his home runs, which pitches he had hit and off whom. He always had the final word, even until he said his final words. The spirit of Ted Williams was still strong even when his wrists and biceps had given out.

Baseball fans are married to their laundry, as Jerry Seinfeld once suggested. This book affected me more deeply than it would, say, a Seattle Mariners fan, simply because of the settings, the names, the uniforms. It's Red Sox lore. It's my team. And life's too short not to have innocent passions, or to try to fully understand why you do.
Posted by John Galluzzo at 7:20 AM No comments: 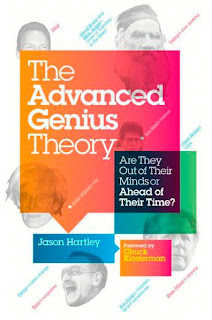 Why I read it: An interesting concept.

Summary: The author and a friend create a subjective system of classifying everyone and everything based on achievement over long periods of time, sunglasses and leather jackets. Mostly it's about Lou Reed.

My Thoughts: So you're not into Lou Reed. Do you know why?

According to the author, the theory of Advancement states that Advanced artists go through a phase of general acceptance, or Overtness, but then move into realms we cannot yet understand. We're listening to Prince sing in 1985 while he's partying in 1999. During this period, since we can't understand why Advanced artists are thinking about what they're thinking about, we think they've "lost it." In reality, they've just moved beyond the sensory capabilities of regular humans. You lost Lou Reed after "Walk on the Wild Side." But in reality, he's even better today at what he does than any of us could imagine.

The problem with this theory is its subjectiveness. But the author knows that. And he knows to that his presentation of the theory and the way he thinks about it is flawed. In other words, in regard to many artists, he may be talked off the ledge that straddles Advancement and lifelong Overtness. Case in point? Through 250 pages, he does not recognize a single woman as being Advanced. And he recognizes the lack of recognition. He argues against Madonna and Patty Smyth, but says that Britney Spears may get there someday. But that's about it. He even states that perhaps Advancement is just a male thing. There could be no greater backwards statement. But he's working it out. Advancement is just a theory, not a proven scientific fact.

Be ready to read about music if you pick up this book. The author spends about 60% of the book on the topic, mostly because it's what he knows best, and because the theory works well with people in that industry (sunglasses, leather jackets...).

If this book had a subtitle, it might be Two Guys, a Theory and a Pizza Place. Another would be The Lou Reed Story. The great thing is that as the theory is a living. breathing, changing thing, it's right here on Blogspot:

Posted by John Galluzzo at 5:55 PM No comments: