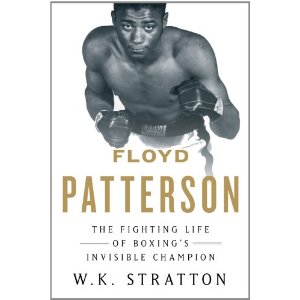 Why I read it: A love of boxing history, and Patterson's story was one I had not read in depth.

Summary: A bio of the youngest heavyweight champion and the first two-time champ.

My Thoughts: Boxing's heyday has come and gone, we know that. Unfortunately, it was pretty heavily controlled and fixed during that time (so why should we be surprised by such shenanigans today?). Still, a knockout punch is a knockout punch. Boxing's gentleman, a man of pureness and honesty - he once stopped fighting an opponent mid-match to help him find the mouthpiece he'd dropped - was Floyd Patterson, who rose above all the deviousness and made his living in the sport in the fairest possible way.

Is that why we forget him?

We remember Joe Louis for his role in World War II, and Muhammad Ali (Patterson was the only man who was allowed to call him Cassius after his conversion) for obvious reasons. We remember Mike Tyson for biting the ear off Evander Holyfield. But we don't remember Floyd Patterson as one of the all-time greats, despite his record, 55-8-1, and his monumental bouts with Ingemar Johansson, Sonny Liston and even Ali.

Stratton's bio of Patterson shows us that we'e been missing something, and that the professional boxing world today is missing something, that it is possible to rise to the top and be a good person. Floyd spent his career doing good works outside the ring, helping schoolboys escape poverty and despair as he had, giving communion to shut-ins and so much more. His life was one of contradictions. In the ring, he could be as fierce as anyone, as long as the clock was ticking; when the final bell sounded, he often rushed to embrace his opponents, to even help them off the mat.

There is one more side to the Patterson story. His rise coincided with the rise of the Civil Rights movement, and he contributed to it in numerous ways, financially, representationally, even physically, in person, when called upon. He was a soft-spoken man, but often his actions spoke volumes. In a time of turmoil when African-Americans were even fighting among themselves over how Civil Rights should be achieved, he was ostracized as an "Uncle Tom." Stratton stresses this was an unfair classification.

In the end, this book left me feeling like boxing needs another Floyd Patterson if the heavyweight title is ever to rise again. Alas, the Golden Age is gone.
Posted by John Galluzzo at 7:05 AM No comments:

At Home: A Short History of Private Life by Bill Bryson 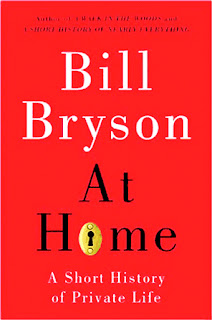 Why I read it: The Bryson train continues.

Summary: A tour of Bill Bryson's house and how it got that way.

My Thoughts: We all stop and do it at some point in life. We look at something we've taken for granted for our entire lives and we think, "Wait a minute...why is that like that?" For some of us, the practice becomes a runaway freight train.

Bryson makes just such a move with At Home, but instead of just picking up on a few items around the house, he takes us room-by-room through the original plans and the finished product, bathing his mid-nineteenth century British cottage in the era in which it was born. The year of its construction - and so it goes for any house - can tell a lot about building materials, floor plan, paint color choices and more.

Each room, then, becomes an adventure in the history of western civilization, told only, though, as Bill Bryson can describe it. He has a particular knack for finding the oddballs of history and dropping them into their places within his books, until the cast of characters resembles a roll call of buffoons, misguided schemers and inept aristocrats. When we consider the time period he studies heavily in this book - from about 1750 to 1900, we understand why; no time in history was more overwhelmingly ostentatious than the Victorian Era.

So if you've ever wondered why it's pepper and salt on your table, why we have mudrooms, when the first toilet was introduced or who invented the term bigwig (Bryson is big on etymology, which makes me want to sit on his knee like he's my grandpa and chat with him), then this book is for you.
Posted by John Galluzzo at 11:46 AM No comments:

Monopoly: The World's Most Famous Game by Philip E. Orbanes 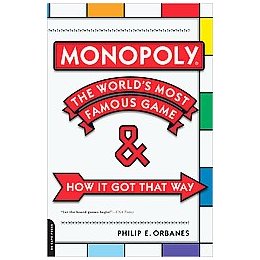 Why I read it: Why not? Played the game all my life, wanted to know how it became what it did.

Summary: The rest of the subtitle is "& How it Got That Way," so you can divine the rest.

My Thoughts: It should have been more obvious to me as a student of history that Monopoly wasn't simply drafted in some focus group-driven testing center. I knew from playing that it had the old-time Atlantic City story, but beyond that, I was pretty hazy.

Orbanes is more than just your run-of-the-mill historian. He's been in the board game industry for years, and has been tied directly to Monopoly along the way. If you've ever watched the Monopoly world tournament finals on ESPN (okay, you won't find them there, but they do exist) then you've seen him as a judge. The man knows the game inside and out.

As such, his book is about as deep as you need to get to know the story. He traces the game back to the time before the game, when other landlord and property tax-based board games were seen as instructional, controversial and even too politically-charged to stake a company's reputation on. The roots reach into the late 1800s, and today the game branches out across continents and genres. Along the way there have been winners, losers, false inventors, international champion players and now obsessed collectors.

I wish I could say that the book changed the way I will look at the board, but the fact is that I don't play, and probably won't for many, many years. The author claims that a properly played game takes 90 minutes. Well, then I've done something wrong for my entire life. I don't ever remember a Monopoly game that didn't wear me out. But, alas, I have a 3 year-old and a 6 day-old, and the day will come when I'm forced to play the game that I forced my parents to play. And so it will continue.
Posted by John Galluzzo at 11:29 AM No comments: