Over Time: My Life as a Sportswriter by Frank Deford 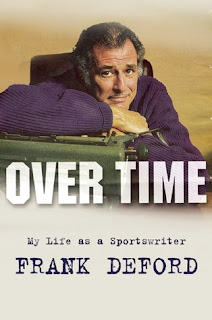 Why I read it: Since his days in beer commercials, the author has always been on the edge of my sports consciousness.

Summary: Various and sundry observations of a supremely talented writer who chose to cover sports.

My Thoughts: Rock on, Frank.

I suppose if I met him, I might walk away with the notion of pomposity that others have shared, though who knows. A callousness develops over time with members of the media. The sporting public wants the truth, but only if it doesn't demean their heroes. "Enemies" are made, over trivial, stupid things. Hell, I've received hate mail from people who think I've said bad things about their ancestors in a history article, seven or eight generations back, as if somehow me mentioning that person was a pirate a thief or a rogue makes the modern-day descendant susceptible to public scrutiny. Frank has stood in the limelight and stated his opinions of living, breathing people. So what, you say? Sportscasters do that every day? Few do it with grace, my friend. If he comes across haughty, it's because he's seen too much.

I've said it before, but I can't wait until I'm old enough for cantankerousness to be a virtue. Frank's not there; he's not bitching for the sake of bitching. But when he says he doesn't like Vince McMahon from personal experience, I'll take him at his word. After 50 years in his industry, he deserves that much. And he still has time to develop that cantankerous side if he wants to.

Frank's writing in defense of sportswriters is commendable. As he states, sports sells papers, yet sportswriters are seen as the pole dancers of the literary world. There is a definite imbalance in perception and reality.

The ultimate irony for me, being just a casual observer of the Frank Deford story through time, came when I read that his daughter had died of cystic fibrosis three decades ago. For you see, at the time I read the sentence, I was at a hospital in Boston as my newborn son was being tested for cystic fibrosis. I was a lucky one. My son ultimately tested negative. Still, the scare alone made me feel a kinship with the author.

Frank lived in the golden age of magazines, working for Sports Illustrated before the multimedia explosion of the current day. I was born too late to hit that wave. Jealous? Hell yeah, I'm jealous. I would have loved to see what Frank saw, meet the people he met. If you ask me, his has been a life well spent to this point, and I hope there's much more to come.
Posted by John Galluzzo at 6:33 AM No comments:

Why I read it: Read it once in college and loved it, wanted to read it again, with a deeper appreciation of world history.

Summary: The ultimate optimist searches for the best of all possible worlds.

My Thoughts: I read this classic when I was in college, before I knew what an Anabaptist was. Now that I do, the book is a lot more funny.

And that was the point, in a way. Voltaire was making political statements about his world, both France and the other countries France came in contact with. It was satire. Today it's comedy. Back then, it made people's blood boil. But those people are long gone now. The book has to be read today with footnotes to put it in context.

Voltaire deals in the impossible. People who are obviously, even publicly killed in the early parts of the book return to life later on. Candide, a young, love-starved German, loses the love of his life, only to run into her across the Atlantic as he and his cohorts cris-cross the known world (of about 1759) and lose her again. The book is a work of fantasy, but that opens up a world of possibilities. Voltaire takes shots at every government, at warfare, at greed, at nobility.

The end of the book, literally the last five words, are as telling as any in the story: "We must cultivate our garden." No words are more applicable across space and time to any state, country or other political body.

I'm so glad that when it comes to books I'm a pack rat. I loved this book in college twenty years ago, and I love it even more now. I wonder what else I've got stored away in those old boxes.

Posted by John Galluzzo at 7:37 PM No comments: