Imperfect: An Improbable Life by Jim Abbott and Tim Brown 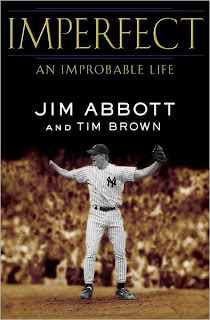 Why I read it: Followed the author's career, and always found his accomplishments to be amazing.

Summary: The life story of Jim Abbott, major league baseball pitcher, juxtaposed with the story of his no-hitter.

My Thoughts: What struck me most deeply about this memoir was the depth to which Abbott allowed himself to delve. Athletes, especially baseball players, are mostly guarded, unwilling to let anyone see behind the 10-foot-tall, bulletproof shields they believe they carry. Yet, not one of them is Superman, despite what they may tell you.

Abbott knew that coming in. Born without a right hand, he had something to prove, from the ballfields of Flint, Michigan, to Yankee Stadium. And he's correct - you can't write about him or what he's done without mentioning his deformity. It's a damn shame, but it's an essential facet of his story.

The Jim Abbott we saw was the professional athlete, going to the mound, throwing his innings and leaving the game ahead or behind. We marveled at his mindless use of his glove, as if the transitions were the most natural movements in the world. What we didn't see was what was going on inside his head. And sometimes, neither did he. His subconscious sometimes got the better of him.

There were a lot of bad days in Jim Abbott's career, days that left him with inner turmoil. But he also had the best day of all, no-hitting the Cleveland Indians. Did it offset the bad? Probably not, but it didn't hurt either. In the end, Jim Abbott it (seems?) happy with his career, and more importantly, his life.
Posted by John Galluzzo at 5:49 AM No comments: