Lefty: An American Odyssey by Vernona Gomez and Lawrence Goldstone 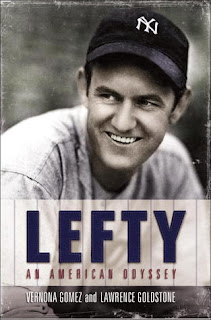 Why I read it: After a full life studying baseball history, I found Gomez to be one of those few major characters of whom I knew very little.

My Thoughts: I just didn't want him to go. As the pages in my right hand dwindled down to a precious few, I knew the end was near. I didn't want to say goodbye to Lefty Gomez.

Amazing. And me a Red Sox fan.

Lefty started out poor, with a "cannon for an arm," but unable to afford a glove for the other one. He rose through the ranks in the way it was once done, discovered on the dusty playing fields of far-off places (I guess it is still done that way today, outside of the United States). Told the Yankees wanted him, he struggled to get up cross country train fare and food money and starved his way from San Francisco to Florida to his first spring training.

Soon, he was on the mound with Babe Ruth looking over his shoulder from right field, and Lou Gehrig looking on from first base. Soon, he was married to a starlet. Soon, he was the hero to every kid who ever grew up in his hometown. Soon, he was a World Series champ, starting the first All-Star Game and rubbing elbows with Bing Crosby and Ernest Hemingway.

Along the way, he spread his wit - we can thank him for "go-fer ball" for instance - and became in demand behind the microphone.

Lefty's tale is one of the American Dream, of impossible odds, of unquenchable desire, and a life lived well. Long live El Goofo.
Posted by John Galluzzo at 7:39 PM No comments:

Bottom of the 33rd: Hope, Redemption and Baseball's Longest Game by Dan Barry 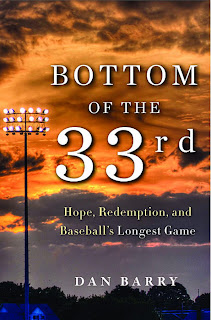 Why I read it: Baseball history, Red Sox history, in my lifetime.

Summary: The human stories wrapped into the longest game in professional baseball history.

My Thoughts: It helps if you can tell the players without a scorecard.

Actually, not knowing the characters that played out the longest game, a cold, Rochester Red Wings-Pawtucket Red Sox tilt stretching well beyond both sides of mindnight on April 18-19, 1981, wouldn't detract whatsoever from this telling. But being a boy of 10 when the game unfolded, growing up an already twice-wounded Red Sox fan, I did know the players. Wade Boggs, Marty Barrett, Bob Ojeda, Rich Gedman, Bruce Hurst, Mike Smithson? The obvious ones.

Julio Valdez, Roger LaFrancois, Chico Walker, Luis Aponte, Winn Remmerswaal? That's where backyard baseball hero worship kicks in. Not only do I know who they are, if I took a bat in my hands or stood on a mound today, 30 years later, I could show you how they played the game. Sam Bowen? Once I saw his name in the lineup in the book, I wondered whether or not they'd talk about his home run. I saw it live on television, and couldn't believe he never made it back to the major leagues. Such was the beauty of childhood sports viewing. All I cared about, all I knew was what happened on the field during the television broadcasts.

The story is one of a comedy of human idiocy. Seriously, 32 innings in near-freezing temps (33 was played later)? Did the umpires really have to wait for official word from the International League to stop the game? Apparently, yes, because somewhere a piece of paper said the game had to go on, the game had to go on.

The never-ending march of innings gave author Barry innumerable opportunities to tell the tales of the players, from the aforementioned PawSox to the Red Wings, led by Cal Ripkien, Jr. They all teeter on the brink of superstardom; some gain it; some have tasted it, and are never to go back; some will never even sip that cup of coffee. For every Wade Boogs, there is a Drungo Hazewood and a Bobby Bonner.

The city, Pawtucket, its stadium and the people who run it are featured. The fans, the few that actually stuck around for the duration - it was, after all, the eve of Easter when the first pitch was tossed - get print space, as well they should; they were as much of the story of the game as the players. Barry covers all bases in telling the tale.

In the end, the story drops onto the broad shoulders of Dave Koza, the PawSox heavy-batted first baseman, his journey to the game, and the years beyond.

Each of the 219 at-bats in the longest game came with hope: for a hit, a run batted in, a call-up to the major leagues. When we stop to think about the odds - 30 teams, 25 players per roster, some men lasting 20 years in the majors; several levels of minor league teams jammed with hopefuls - it's sad how many dreams are crushed every year.

But don't listen to me. Let Dan Barry and his beautiful prose tell you the story.
Posted by John Galluzzo at 7:08 PM No comments: