The Lost Continent by Bill Bryson 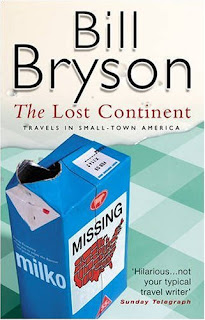 Why I read it: Closing in on finalizing the Bryson library.

My Thoughts: I still haven't figured out the formula yet. Somehow, Bill Bryson manages to insult just about everybody in America - waitresses, state highway patrolmen, Shriners - and in the end remains one of the most popular and widely-read American authors of the modern day. We give him money to write books about how awful we all are. He hasn't hit me yet, so it's not like I'm sitting here in a fez with my Shriner buddies going, "Well, he is right after all, we are a bunch of jerks." So maybe that's the key.

He does hit things on the head, though, and that's the sad part about it. The book was written in the 1980s, so if you can slide past the Ronald Reagan jokes to catch the grander themes, the "dumbening" of America, as Lisa Simpson called it, the vapidness of the American tourist in his own country, it's all there. We just are too polite to say anything about it. Bill's not. Thank god, Bill's not.

I found myself, while wrapped in the pages of this book, anticipating his visits to certain places, places I know well. He nailed Boston. He just talked about its traffic as he drove through in an utter panic. That's so us.When he did write about those special spots I know so well, I wanted to read the passages aloud to my family and friends, ending with "I know that place! I was there last summer with my friend Greg, remember?" It was the equivalent of being in a plane and shouting "I can see my house from here!" Nobody really cared, but me.

So, I secretly laugh aloud to Bill Bryson's books. I'm up to 5 so far, I think. Lots to go. But I want that formula! How can I be a curmudgeon and not lose my standing in the community? When do I get to vent on paper and have people love me for it? As George Costanza's father said on Festivus, "I got a lot to say about you people!"
Posted by John Galluzzo at 1:29 PM No comments: