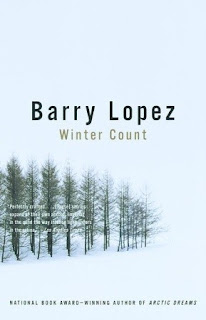 Why I read it: Still fascinated by the world's extremes, and Lopez has always come highly recommended.

My Thoughts: The concept itself recalls a time and life we will never understand, when years (summer to summer) were marked by the depiction of significant events on ceremonial robes of Northern Plains tribes. When recounted together, they formed a "winter count," a remembrance of the life of the tribe.

Lopez's stories wander from the Plains to other remote and distant places - seashores, lonely mountains, from Spain to California. Their overall tone reminds me of Peter Mathiessen's The Snow Leopard, with a deep layering of mysticism and spirituality, of connectedness with the natural world.

But the theme I felt strongest was loss. Every protagonist deals with it in some way, whether it be something tangible, like the great buffalo herds, or something abstract and personal - a relationship, a pleasant memory, pride. Lopez uses perspective to draw us into these tales. A lecture-goer, as genuinely interested in the lives of the Native Americans, can never grasp the emotions of one of them sitting in an auditorium listening to a recital of facts about long lost tribes as interpreted by non-indigneous people. How much can we really know?

Be prepared to think a little harder than usual for this book.
Posted by John Galluzzo at 8:39 AM No comments:

Neither Here Nor There by Bill Bryson 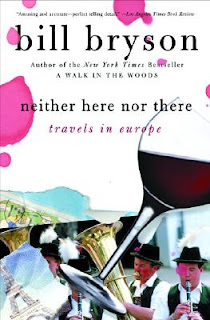 Why I read it: Yet another Bryson book. Like a bluefish in August off Boston, I think I'm hooked.

Summary: The author takes his famous grousing act across Europe.

My Thoughts: There are so many things I could say about this book - the love Bryson shows for my people, the Italians, the fact that the French are still sooo French, etc., but one passage stood out above all for me.

He's in Austria at the time that the notion strikes him. He reminisces about a Disney film about the Vienna Boys' Choir. "It all seemed so engaging and agreeably old-fashioned compared with the sleek and modern world I knew, and it left me with the unshakable impression that Austria was somehow more European than the rest of Europe. And so it seemed here in Innsbruck. For the first time in a long while, certainly for the first time on this trip, I felt a palpable sense of wonder to find myself here, on these streets, in this body, at this time. I was in Europe now. It was an oddly profound notion."

I've been twice. When I was 14, I joined a school exchange trip to Italy. We landed in Rome, took a train down the Italian coastline to Reggio di Calabria, the train boarded a ferry, crossed the Straits of Messina, and deposited us in Siracusa for two and a half weeks. If you've never been to Europe, it's hard to explain how it felt, but Bryson comes close. It's no longer a shape on a map, a social studies topic defined by its terrain, principal language and chief exports. You're there. You're not able to run down the street to your favorite convenience store to intercept a craving, and in fact, most of the foods you normally eat are out of reach entirely, as are pretty much everbody you've ever known in your life. Many of the buildings around you reach well beyond a few hundred years old - in America, 1620 is antiquity - and can be a couple thousand years old. It hit me so at 14 as I stood in awe of the Colosseum.

At 29, I took full advantage of it, in London. I was there for research with a dear friend, who guided me through the city. We did the sights in our down time, over Thanksgiving weekend, no less. I watched BBC television, listened to BBC radio, I bought a pair of "Mind the Gap" boxer shorts, visited the Tower of London and took in Big Ben in big gulping eyefuls while the rest of the tourists on the boat on the Thames practically tipped us over trying to catch a glimpse of the London Eye. I absorbed London like I never could have taken in Italy at that age.

Bryson forced me into a LOL moment when talking about visiting the Vatican City. He mentions having to fight his way through a small army of men attempting to sell him slides - oh my god! I was there just a few years before he was, and had the same exact experience. What are the chances that we were accosted by the same men? I'd say pretty damn good.

Whether you are neither here nor there, the world is a smaller place than one might guess.
Posted by John Galluzzo at 8:04 PM No comments:

A History of the World in 6 Glasses by Tom Standage 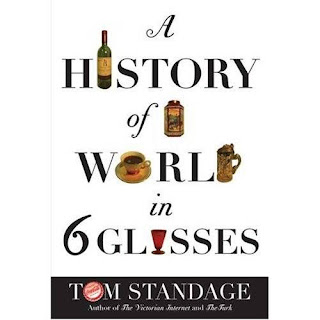 Why I read it: I'm always interested in histories of the world told through specific drivers. Second Standage book, too.

Summary: A fluid history of the world.

My Thoughts: I was thrilled when I finally read the line on the bottom of the cover, under the author's name: "Author of The Victorian Internet..." I had picked up the book just for its concept, not worrying at all about who wrote it. But, as it turns out, I'm already a Standage fan. The Victorian Internet was one of my favorite books of all time, read well before I was a blogger - nay, before there were blogs. The section on pneumatic tubes alone was worth the price of admission to its pages.

Onto this book. The six glasses? Beer in Mesopotamia, wine in the Mediterreanean, spirits in the Carribean and the New World, coffee in England and France, tea in China and India, and Coca-Cola in America. Each product placement in time comes with grander themes - think coffee and enlightenment and revolution, tea and British imperialism, Coca-Cola and Americanism and globalization.

Remarkably, as the author points out, more than two millenia later we still divide ourseves along the beer/wine lines in Europe. Northern, Germanic peoples? Beer, ale, lager. Southern peoples, in the former Greek and Roman empire lands? Vino. And other traditions continue as well. Every time my wife orders "Captain with diet and lime," she's generally ordering grog, the concoction that empowered the British navy during the age of sail. No wonder she's never had scurvy. Keep up the good work, honey.

The growth of Coca-Cola from patent medicine to the second most recognizable utterance in the world (care to guess the first?) may be the most interesting journey, but that, perhaps, is because the others are generally basic themes of historical study. Coca-Cola, being current, is both understudied and fraught with company rhetoric and outright marketing myths about its origins.

I think, too, that it's pretty amazing that all six continue to evolve and change in the modern day, winemakers dropping the facade of snobbery to reach into wider demographics, beer going lite, light, or ice, and coffee, well, new coffee empires are formed every day. Change is not always a good thing, though. I survived New Coke, for instance. In the end, Standage brings it all back to the beginning, and the continuing problems of finding disease-free potable water for large portions of the world's population.

Now, as Kramer once said on Seinfeld, "These pretzels are making me thirsty..."
Posted by John Galluzzo at 5:53 AM No comments: