The Pox and the Covenant by Tony Williams 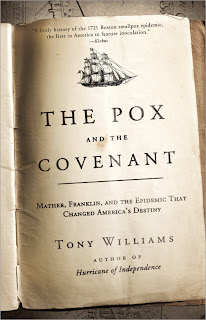 Why I read it: I'm always available for another tale from Boston's past.

Summary: Cotton Mather, James and Ben Franklin and the smallpox epidemic that struck the city in 1721.

My Thoughts: Well, it was definitely the first time I've ever come across a story in which Ben Franklin was the bad guy.

And I have to admit that when I read a story about the 17-teens and see Franklin's name prominently mentioned, it's feels strange, like he lived too long a life to be human, like he's intemporal. I think of  him at the heart of the American Revolution a half century later. But there he was, rousing the rabble in 1721.

What a terrible occurrence the epidemic was. At the time, Boston was the busiest port town in the New World, 11,000 residents strong with a board of selectmen running things (now, try 2 million and a "maya"!). Before the epidemic petered out, the virus had afflicted more than half of the population - an unfathomable number. SARS, the bird flu, throw at me whatever you like, they never reached the proportions that this event did. I can't imagine what it must have been like to watch the world around me crumble like it did for so many families during the epidemic.

The clash in the story - and every good tale has conflict - came when Cotton Mather, a religious man, suggested the first-ever New World use of inoculation. Puritan Boston revolted at the thought, and one man even threw a bomb through Mather's chamber windows. One doctor, Zabdiel Boylston (and that's not even my favorite name in the book; that belonged to Waitstill Winthrop), risked public ridicule and governmental punishment and inoculated patients wanting to build immunity. He ended up setting precedence, making history.

On the other side of the debate was James Franklin, older brother of our beloved Ben. He was the agitator, a young printer hoping to make a name for himself. The war of words in the newspapers spilled into the streets, and let's face it, in a town of 11,000, eventually people will come face-to-face. (Trust me - it's the exact proportions of my hometown, and I've seen such pots boil over). In the end, more than a decade later, Mather and Boylston were proven right, but they went through hell to get there.

As for Ben? He was James' puppet for a while, apprenticed to him, eventually breaking away, only to be effectively blacklisted in Boston at his own brother's hand. He fled south and got a fresh start in Philadelphia. Had he stayed in Boston, would he have become the most famous American of his generation, or the most villified? History will never know.
Posted by John Galluzzo at 6:17 PM No comments:

History of the Donner Party: A Tragedy of the Sierra by Charles F. McGlashan 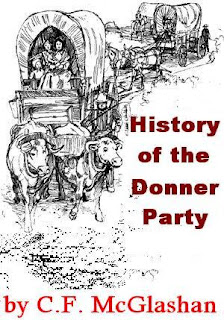 Why I read it: I was engrossed by the Ken Burns documentary while in college, and have even visited Donner Pass.

My Thoughts: I wasn't around when it happened, so I might not truly have the right to say these words fairly, but I don't think there's any blame to be had in ths tale as far as the cannibalism goes.

The problems are many-fold, though. First, I'm temporally out of context. I'm not living in 1847 reading the newspapers of the day, and am unsure of what societal mores I would have carried, what early Victorian sensibilities would have swayed my thoughts. I also don't know if America has since had a "coming to grips" with the notion of "survival at all costs." If we have, it probably had to do with this very event. It was the precedent.

I think, too, though, that never having been in the position of starving to death with a warm dead body lying beside me, I am noit qualified to say whether or not I would do it. I am willing to bypass passing judgment under the weight of the evidence as I have it.

But the book itself provides another problem. The author, a late Victorian Era journalist, interviewed survivors of the tragedy (a little more than half of the 90 pioneers made it through) and, in the fashion of the day, made exalted heroes of them. Every character sounds, in quotes, like an English professor, using words no one ever uses in average convsersation. The accusation against the author was that he was too close to many of the people he interviewed, and the story was skewed into their favor because of it. If that is true, then I don't have the proper evidence to pass judgment.

In the end, that's the big question that looms over your head as you read. What would you have done? Cannibalize or die?
Posted by John Galluzzo at 7:02 PM No comments: 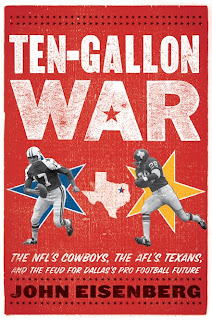 Why I read it: Sucker for sports history, and there are gaps in my pro football history knowledge I'd like to overcome.

Summary: The NFL's Cowboys, the AFL's Texans and the feud for Dallas' pro football future. (Also the subtitle).
My Thoughts: One passage in the book set things straight in my mind. It talks about why football was becoming America's game, why baseball was lagging behind. It was simple. Football mirrored the 1960s: violent and chaotic. "Pastoral and timeless" was gone from the American psyche. The Kennedy assassination and Vietnam did them in.

The book is pro-AFL, which is just as good an angle to take as any. Lamar Hunt comes off as a hero, while others from the NFL side saw him as public enemy #1. One man's terrorist is another man's freedom fighter.

For me, this book served dual purposes. First, the microstory of the war fought in Dallas was as interesting a tale as you're going to get. A start-up league picks its cities; the old guard places an expansion franchise right in the heart of one of those cities in an attempt to beat the upstarts before they can get rolling. But the wider backstory of the days prior to the merger of the AFL and NFL helped fill a gap in my knowledge, and made several modern-day problems clear as well, like Los Angeles never being able to support a team longterm despite its obvious size and audience potential. It's not a modern thing. It's always been the case.

And names from football history come to life: Hunt, Tex Schramm, Hank Stram, Abner Haynes, Don Meredith, Tom Landry. Some still had roles in the sport when I started watching, but others had moved on. I know them all so well now.
Posted by John Galluzzo at 9:15 AM No comments: