A Perfect Lady: A Pictorial History of the U.S. Coast Guard Barque Eagle by Tido Holtkamp 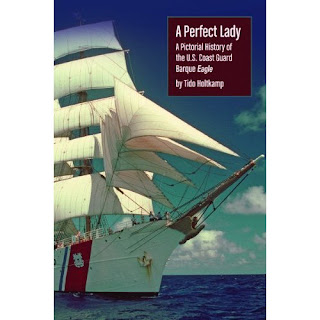 Why I read it: I am a Coast Guard historian, if nothing else.

Summary: A look at the Eagle through the eyes of one who sailed her in her former life.

My Thoughts: It's always been hard for me to look at the Germans of World War II and think anything but bad thoughts. It's not like it was drilled into our heads that all Germans were bad; it's just that in the limited time we learned about the war in school, the only Germans we heard about were the Nazis.

And so it was with the German barque Horst Wessel. Like the Bismarck, it represented our World War II enemy, those evil people from that evil place. But the more we live, the more we learn.

Tido Holtkamp's book changed my impression of the ship, and, of course, of the German people who lived during that time. I think it was one passage in particular, when the captain of the training vessel commented after Adolf Hitler left the ship that he wasn't fond of the man. He couldn't stop blinking, he said. He read those fluttering eyes to represent an unsettled, nervous mind. It reinforced the fact for me that not all Germans were blindly allegiant to the Nazi cause.

The first half of this book shows the exuberance of German youths taking to the rigging on grand adventures, perhaps away from home for the first time, seeing the world, eventually seeing bits of it blown to pieces in the war. That war rolled back to their homeland and they watched as thousands upon thousands died in massive bombing raids and finally an infantry push toward the German capital.

So Holtkamp pulled off the miraculous for me. He made me sympathetic toward the German people of World War II, toward the regular army soldier, the regular navy sailor, the professional soldier just trying to stay alive and come home to his family. Let's face it, first impressions die hard. And what's that you say? This blog post hints that perhaps Americans learn history from an America first perspective (and not an America First perspective, which would be completely different)? Yes, I was told certain things as a kid; but I'm glad I'm smart enough to make my own observations and learn new tricks, even as an aging dog.
Posted by John Galluzzo at 6:59 PM No comments: