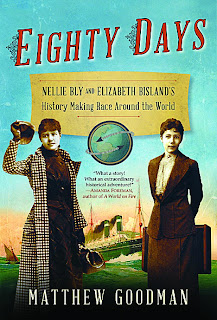 Why I read it: Fascination with all things Victorian.

Summary: Competing New York newspapers launch female journalists in a race against Jules Verne's Phileas Fogg and one another.

My Thoughts: Truth be told, Nellie Bly did not know for a long time that she was racing Elizabeth Bisland. Bisland was a throw-in by a competing newspaper that wanted to get in on the marketing of a race around the world. Nellie's race was against Fogg. Bisland, on the other hand, was sent on her circumnavigation practically against her will, and in direct competition with Bly.

The question nagged at me, though, as I read the book - what is "around the world" according to the standards of the day? It was certainly not an equatorial race. It seems that it was meant to be around the civilized world of the northern hemisphere. No parameters were ever set forth, other than to generally follow the route taken by Fogg. Had Bisland won (no need for a spoiler alert here, as the name Nellie Bly is much more of the household variety, and from that fact deductions can be made), would the New York World have quibbled over routes?

That, too, was a fascinating feature of the story. Bly went east, crossing the Atlantic straight out of  Jersey City. Bisland went west, crossing the continent by train before departing for her transpacific journey from San Francisco. They both paid for it in the end. Bisland faced horrific storms on the Atlantic in January, while Bly found herself snowbound like the Donner Party in California.

The post-race study is just as interesting as the race itself. Who really won in the long run? Was Nellie's burst of glory worth the longterm effects of instant stardom?

It's a story that will never be repeated, one that caught the world's attention in ways we may never understand.
Posted by John Galluzzo at 5:07 AM No comments: