Wild Ones by Jon Mooallem 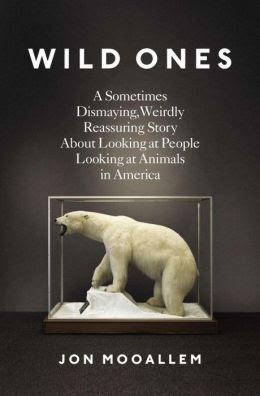 Why I read it: I'm a conservationist by training and at heart.

My Thoughts: Ugh. Where do I begin.

I guess I begin with my own experiences. I worked for Mass Audubon for about a decade, and spent a lot of time outdoors. And that may be the understatement of the millenium. When I was not leading public programming on some nature trail, I was standing in the woods counting birds or identifying amphibian sounds or flipping logs for salamanders. I witnessed nature's majesty, a few acres at a time, and still do, whenever I can.

I read the old accounts of wildlife. I wrote the new ones. I know what we've lost, where we've lost it and why we've lost it. I wish I could turn back the clock, but I can't. We'll never see the passenger pigeon again, nor the eskimo curlew, and it's all thanks to "us." Somehow, we're all tabbed as guilty with the degradation of the planet just by being human.

What bothers me most is that most of the world will never understand, or care to take the time to understand what we're losing. We've "greened" up quite a bit in the past few decades, but are hybrid cars and solar panels and wind farms enough to save the planet's species? And is saving them what we are supposed to do? If nature took its course, would all of the American kestrels die anyway, or do we have an obligation to try to keep a species around seemingly against its will to live with us because we posioned it or stole its habitat?

Mooallem takes a wide look at not the endangered species, but the people saving the endangered species. He covers some basic tenets, like shifting baseline syndrome (the notion that as each generation enters the world, the world they see is the baseline, and they don't truly get a sense of loss until their later years; as the next generation is born, the baseline reforms, etc.), and shows how humanity is not equipped to deal with longterm problems. We just don't live long enough.

The only reassurance I gained from this book is that people will always be willing to try. Zealousness goes a long way with conservation causes, but often the zealots are crackpots, hard to work with. Burnout happens, either from overexertion, or overexposure to difficult partners. But there's always somebody willing to step into the breach.

Mooallem tells his tale through the polar bear, the Lange's metalmark butterfly and the whooping crane, but he may as well have used any of thousands of other species. The story would be - and will always be - the same.
Posted by John Galluzzo at 8:39 AM No comments:

Tarzan of the Apes by Edgar Rice Burroughs 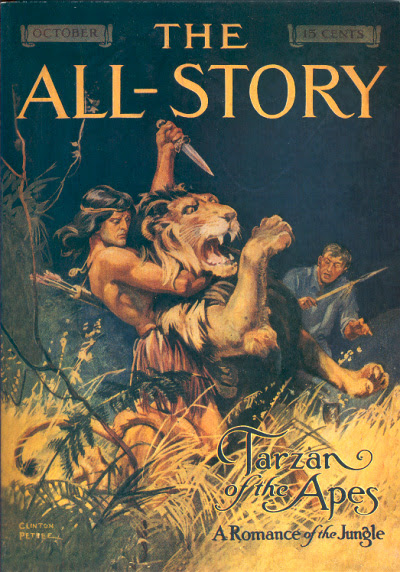 Why I read it: Taking on a classic once in a while.

Summary: A boy rasied by apes discovers his true heritage and chases the woman he loves.

My Thoughts: This book may be the first romantic tragedy I ever read.

I guess that somewhere in my past, probably in my childhood, I got the notion that Tarzan and Jane were a matched pair for life. I had no idea that he lost her in the end.

But that's the end, and we'll return to those thoughts. One of the first things that struck me about this book was the timing of it all. Tarzan arrives on the literary scene in 1912, at a time when the notion of evolution was still being hotly contested. Charles Darwin's On the Origin of Species came out in 1859; the Scopes Monkey Trial wasn't until 1925. Burroughs saw enough similarities between man and ape that he brought the mother ape Kala together with baby Tarzan in the most intimate bond between mother and child, nursing - albeit without using that very word.

Sweeping evolution aside, we come next to the contextual struggle of race. Burroughs is constantly comparing the various races represented in the book - the black tribesmen, the whites (pirates, French sailors, etc.), the ape tribes, and more. Tarzan tries to parse out just who is above whom at all times, and mostly the black peoples lose out. Keep in mind Burroughs was writing in 1912, and the world had a lot of growing pains to go through before the notion of equality for all was truly entertained. Even Esmerelda, the mistress of Jane Porter, is there solely for comic relief in the way that actor Stepin Fetchit was in all his movies.

And so we chase toward the finish of the tale, and Tarzan transforms. He learns his true identity thanks to the work of French naval officer Paul D'Arnot and a fingerprint expert with the police department in Paris, and a clue from the father of Jane Porter. He chases Jane all the way to Wisconsin and stands on the brink of pure happiness, only to find that she has been betrothed to another - his own cousin - and that with one word he could change everything. Knowing now that he is Lord Greystoke, he can take all of Wiliam Clayton's money and castles, and perhaps even Jane, but he still has the killer instinct in him borne in the jungle. But only he nd D'Arnot know his identity, and when asked who he really is, he silently disclaims his own heritage, and claims descendancy from Kala. He assures Jane's happiness, even if it means forging his own sorrow.

And so it must be, if we are ever to have a sequel. And there were two dozen, so it was certainly the right decision for Burroughs. I feel that the novel could have stood alone, that a sequel would simply be gratuitous in the way that today's filmmakers only produce blockbuster films if they come in packs of three. But, I so enjoyed Tarzan of the Apes that I'm willing to go against my own instincts and try the next in line.
Posted by John Galluzzo at 6:35 AM No comments:

Winged Warfare in World War I by Billy Bishop 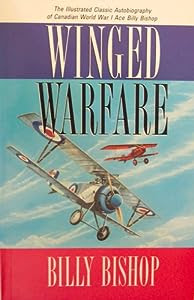 Why I read it: One of my earliest history passions, military aviation.

Summary: The story of Billy Bishop, Canada's most successful fighter pilot of the Forst World War.

My Thoughts: Imagine being so far ahead of everybody else, at anything that you want to do, that no one can even see your smoke. Then imagine being lucky on top of that.

Billy Bishop had it all. He "got it" long before anyone else in the aerial combat world. Just more than a decade after the plane first flew, it was being used as a weapon of war. Imagine the learning curve. Few people knew how to fly before the war; during the war they had to become experts at pursuit and evasion.

So Billy was thinking on a different plane (ha ha) than the rest. He scored 72 confirmed victories during the war. Ace status comes at just 5 downed enemy planes. He squared off against Baron von Richtofen, strafed German airfields, and took on the enemy in lopsided mismatches. He came back alive every time, but often with bullet holes in his machine just inches from where he sat - and therein lies the luck.

His book details not only his aerial victories, but his downtime as well, what passed for fun and relaxation on the front lines in World War I France.

World War I was a different animal than its sequel. With aviation in its infancy, and the world coming out of the Victorian Age, a lot of bravado and machismo still reigned. Pilots found it unmanly to wear parachutes. For every victory tallied when a machine went down, at least one man went to his death.
Posted by John Galluzzo at 7:17 PM No comments: