The Mother Tongue: English and How it Got That Way by Bill Bryson 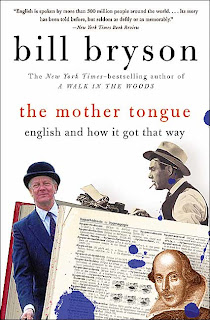 Why I read it: Had I not been a historian, I might have been a forensic etymologist.

Summary: Bryson looks chronologically at the development of English, then shoots off into subtopics like profanity, dialects, dictionaries and more.

My thoughts: Bryson overheard a conversation my dad and I had years ago while landscaping. It's possible he was hiding in a nearby rhododendron bush as we were chatting, tucked behind a big, pink flower; we didn't check all of them for spies.

Anyway, we were talking about the fact that we had just made three unintelligible syllables into a full conversation.

We completely understood each other, and bought matching cheesburgers to prove it. And this was just one example, we realized, of how we regularly slurred, twisted and generally poorly enunciated the English language into our own form of communication. But, I know now, we were not alone. Bryson recorded part of the conversation in his book as an example of the American tendency to do just such horrid things to the language.

And so I was taken back, through this book, not only to shady rich people's backyards on summer days in the 1990s, but my medieval history professor's office at UMASS. One day I walked in and said, "Where did the 'w' sound come from in 'one,' and where did it go in 'two?'" He didn't know. It was just the beginning of one of many word origins conversations we had over the years.

Bryson's work, which, being from the late '80s, is charmingly full of Soviet Union and Paul Hogan references, asks us to look at our language from many angles. Think about how what is written on the page - say, "coffee," for instance - might look the same to any reader of English, but is spoken and sounds different based on where you are in the world. Especially New York. And coffee's an easy one; there are some words, usually place names, that we mash and mangle into pronunciations that are not even close to the arranged letters. It's what makes travel so fun. One man's "PEA-body" is another man's "pee-ba-dee."

He reminds us, too, of how the language is ever-evolving. Heck, when he wrote the book and listed the expansion of media, he didn't even use the word "internet." Hadn't been in widespread use yet (the word was coined in 1982. And why do words get "coined?"). We add words to English all the time, for good or bad. We may look back and think of how funny our forbears spoke a hundred years ago, how archaic it all must have sounded, but guess what English speakers will be thinking about us in 2113? English is as dynamic as the oceans.

There was a belief - probably still is - that Americans and Brits will not be able to understand each other in the next century, that the languages will simply drift so far apart as to become two. I whoeheartedly disagree, but  have one thing Bryson couldn't contemplate when he wrote the book: the aforementioned worldwide web. We are conversing now more than ever on a weekly, daily, hourly, minutely (?) basis. I think we'll still be able to chat, trade, conspire and argue for years into the future.

If the history of language development is for you, so is this book. If you are bored to tears by it. read it anyway, as Bryson is one of the country's top literary wits, and at the very least makes the topic, like any he writes about, fun.
Posted by John Galluzzo at 8:19 PM No comments: 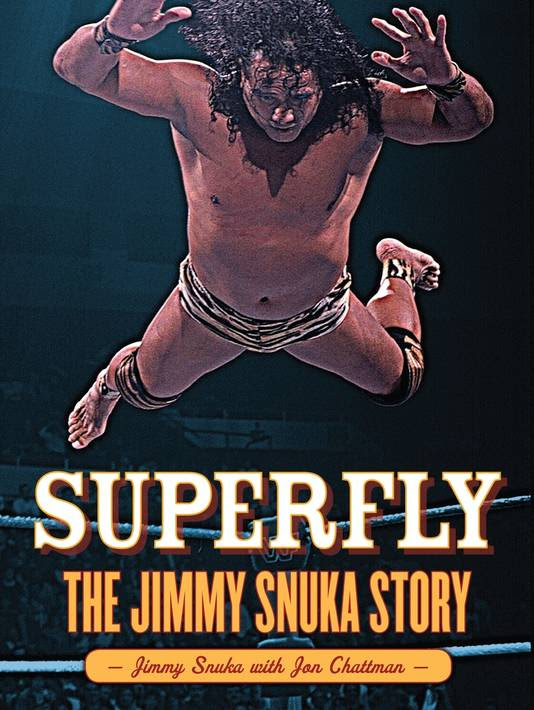 Why I read it: I was 11 when the Superfly flew off the cage. How could I not tune in from that point on?

Summary: A first-person telling of the life of one of the greatest professional wrestling superstars in American history.

My Thoughts: Jimmy Snuka is not the man I thought I knew. And there's good and bad in that statement.

The Jimmy Snuka I knew was a hero, through the eyes of an 11-year-old. He battled Roddy Piper, for goodness sake, the most evil man on the planet (although even then, Piper made me laugh). He flew from the top of the turnbuckles, and more, from the top of the cage. He did things that made my jaw drop, things no other wrestler would dare try.

That was before I knew what was going on, before I understood it was all an act. Even after I did figure it out, I followed the Superfly as much as I could. I never understood why he dropped so low out of the WWF (now the WWE) picture. I read his name in results from Eastern Championship Wrestling, but, as there was no broadcasted program in the area where I lived, I didn't get to see him during those years.

Over the years I came to understand the roughness of life in professional wrestling, always on the road, often injured with no chance of an offseason to heal. I began to see that the life was split; definitely glamorous on the stage, tedious, even painful on the road. I watched the Von Erichs die, one by one, for instance, and inwardly winced every time one did. A sadness overwhelmed me at times for these men to whom I looked up as a child - obviously erroneously, but what the hell did I know?

With the Superfly, I just had no idea. Cocaine and drinking problems grounded him, caused him to make some bad decisions. He had been beaten as a child, had a terrible upbringing. Ho took steroids, although they weren't as villified in those days as they have become today. And I had no idea that he was involved in an incident with a girlfriend that preceded her death. She had cuts, bruises and major head trauma when the ambulance came for her. The case was never really closed. Did his story fly? Did she slip and hit her head, or was there physical abuse that led to her death?

He made great strides to turn his life around and by many people's admissions was one of the kindest, gentlest people you'll ever want to meet - at least those people quoted in his book, who, of course, are a biased crowd. I can understand his humanity, and I even get the effect his childhood had on his adult life. But the whole Nancy Argentino story just troubles me, more deeply than I ever thought anything from that era would at this point in my life.

So Jimmy Snuka has hurt me, brudda (as he would say). I want to love him like I did as a kid, but don't know if I can any more. He's definitely a fallen hero in my eyes, but I'm not sure how far he's fallen.

(As a complete aside - I was interested in the story he told in the book of how Tommy Dreamer was the first wrestler to ever kick out of the Superfly splash. Finishers like that one are sacred; you don't just give them away easily. But the story is mistaken. Just Google Kevin Von Erich and Jimmy Snuka from the early 1980s, and you'll see Kevin kick out more than a decade earlier.)
Posted by John Galluzzo at 7:55 PM No comments: