The Deserters: A Hidden History of World War II by Charles Glass 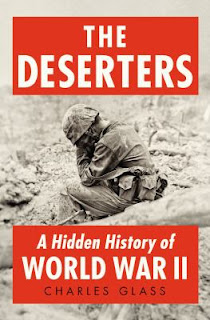 Why I read it: Ongoing fascination with World War II; I'll read pretty much anything that has to do with the war.

Summary: The life stories of several American and British deserters.

My Thoughts: This book asks us one question: what would you do?

We all like to think that if faced with certain situations, we'd come out nobly and as unscathed as possible. But no matter what we think, we are not superheroes. We cannot dodge every bullet, no matter how hard we try.

America's World War II soldiers (and Australia's, and China's, and Burma's...you get the point) faced impossible odds. I remember once reading a document at the National Archives that stated that the officers of a specific outfit expected 90% casualties upon hitting a beachhead. Ninety percent! Through no fault of their own - not for lack of training, not for lack of courage or will - nine out of ten men were expected to be mowed down and killed before reaching their objective.

The soldiers profiled in this book were like many, many others. They trained, headed into battle and at some point snapped. Due to poor timing, some of them ended up with long prison sentences for simply following logic (if I stay here, I'm going to die; therefore, my best course of action for self-preservation is to leave). With bombs falling all around, indiscriminately picking off our friends and comrades one at a time or in bunches, what would we do? What would I do?

Glass weaves a wondrous narrative through the North African, Mediterranean and European theaters, one that takes us eventually into the post-war underworlds of western Europe. I think what affected me most was the storyline about the disgraced servicemen who turned to crime in the streets of Paris, London and other cities. There's possible reclamation of one's life and reputation after desertion; is there any after conviction for armed robbery? I think, too, that I'm too often embarrassed to be an American, and that, although it happened seven decades in the past, I'm embarrassed by the actions of men our country trained to carry out a noble mission who instead sought to profit from the misery of others.

Way off base, of course, but Glass certainly got me thinking. I do question one charachter in particular, deserter Sergeant Whitehead. Knowing he was a liar, as proven by Glass, I found it hard to know what was real and what was made up about his life. In the end, I wonder why Glass went with him as a subject, other than the fact that his life - true or not - makes for a good tale.

The beauty of such a book is that it reminds us that it was just a relative few who deserted, a relative few who turned to crime for survival. Most of the World War II soldiers we meet today (as few as they are becoming) still deserve our respect as it has always been given, unconditionally.
Posted by John Galluzzo at 6:38 PM No comments:

Night of the Grizzlies by Jack Olsen 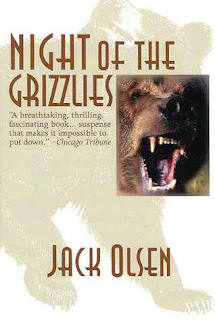 Why I read it: Visited Glacier National Park once as the designated carrier of bear mace.

Summary: Grizzlies attacked and killed two 19 year-old young women in separate incidents within a few hours of each other at Glacier, the first definitively recorded grizzly bear kills of humans in the park's history.

My Thoughts: I'm not buying it.

Oh, I believe that everything that happened that August night in 1967 is true as presented in the book. What I'm not buying is that it never, ever happened before.

Think about it. For 57 years prior to these attacks, hikers had invaded this last bastion home of the grizzlies, and numerous people who went in never came back, were never found. The author makes a good point about the fact that after World War II visitation numbers jumped, stressing out the bears, maybe leading them to this event, but that large tourist population may be the key to another answer. If a tree falls in the woods and nobody's around to hear it...? With the Granite Park Chalet filled beyond capacity with a nightly grizzly show on a well-lit, food garbage dump stage, there were dozens of people within earshot of the first attack. Had they not been there, would the first victim's cries have been heard? In quieter days, before the large increase in hiker volume, it's very possible that people ran afoul of grizzlies and got themselves killed, but that nobody was around to witness and report on attacks. They could have simply "vanished."

Secondly, the notion that grizzlies suddenly started killing humans that night in 1967 needs some re-examination. The author makes good points about the continued cornering of the bears into smaller and smaller areas through time, but what about just basic animal instincts? The nightly search for food? Candy was found in the dragging path of the second victim, believed to have fallen out of her pocket during the attack. Could the bear have just smelled the candy and gone in for a bite? Grizzlies are super smellers, and had become experts in Glacier at picking up backpacks and other sacks containing food and running off with them. Sleeping bags that smell like candy would just look like bigger bags to them, bigger targets of opportunity.

Jack Olsen's prose is superb, and one is on edge from the first page. Without skipping ahead and seeing the names of the victims, the reader is left guessing as to which hiker is going to get it; somebody is going to get killed by the end of the book, but whom?

For me, the book takes on that added value of personal historicity; I've been there, I've set foot on the trails. The sights and places described in the book are fresh in my mind. The first few pages of scene setting took me right back into the park and onto the trails to see the marmots, the mule deer, the bighorn sheep, the Columbian ground squirrels, the mountain goats, the moose, the glacier lilies, the bear grass. It was my first experience with the national parks of the west, and those scenes will always stick with me. The author's highly descriptive writing style dropped me right back to where I was in August 2011.

Oddly, after reading this book, I want to go back now more than ever. Not to see a grizzly, but just to be there again in that magnificent world.
Posted by John Galluzzo at 3:33 AM No comments: