Nerd Do Well: A Small Boy's Journey to Becoming a Big Kid by Simon Pegg 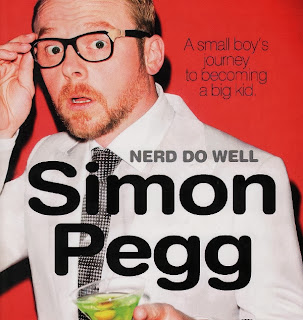 Why I read it: I've been a fan of Pegg's movies since Shaun of the Dead was released in the U.S.; i.e., from the beginning.

My Thoughts: The good thing is that I'm still a fan.

It's happened to me before. I can't remember with whom or when, but I remember reading a memoir, learning more about a person than I had previously known, and becoming deeply disappointed by the realization that I really didn't like them any more. And that's saying something, as I'm a very accepting person, willing to see life from any perspective. So, I guess, in that sense, Pegg was always pretty much generally safe.

But then, he is a British actor, and probably would have beaten the odds anyway. Since my early Monty Python days I've looked to England for comedy, and have become well acquainted with everything from Hancock's Half Hour and The Goon Show to Life on Mars (OK, not a comedy series, but with some true comedic moments thanks to character Detective Gene Hunt played by Philip Glenister). The problem is that as far as Americans know there are only twelve British actors in total, and they appear in everything: Bill Nighy, Stephen Fry, Hugh Laurie, etc. Every few years, another one or two, like Pegg and Nick Frost, rotate into the mix, but the others don't leave. Still, there are only twelve. I know the math doesn't work, but it's my theory and I'm sticking to it.

Case in point: at several points in the book, Pegg mentions things like "I remember the first time I worked with Adrian Edmonson..." Of course he would! He's one of the Twelve, starting with the Young Ones and going forward. And they all appear in each other's films. I recently went to see Pegg's latest film, The World's End, and simply waited for the cameos. And there they were, Pierce Brosnan and, of course, Bill Nighy.

Pegg's autobiography is loaded with wit, as one would expect, and in the beginning works wonderfully in defining the road he followed to reach ridiculous stardom from broken-home internalization of fears and worries. Toward the end, it begins to ramble, but he notices that fact and shuts it down abruptly. After all, he's in his early forties, at the height of his career. How does one finish an autobiography at that point in his life? Hopefully, there's so much more to come that there will be a second volume, something like Pegg Strikes Back. He is, after all, one of the world's preeminent Star Wars geeks. Prediction: he lands a role in episode 7, now being talked about.

The book features lots of great photos and a science fiction short story intermingled with the autobiographical chapters, featuring Pegg as an international man of mystery who is absolutely nothing like James Bond, written in the same humorous style as his movies. Who knows? Maybe someday it'll be one.
Posted by John Galluzzo at 3:37 AM No comments:

The Founding Foodies by Dave DeWitt 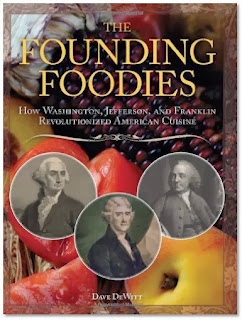 Why I read it: Another window through which to read our American history: food.

Summary: How Washington, Jefferson and Franklin (though him not so much, comparatively) affected the history of American foods.

My Thoughts: If he had just used any word but "Foodies." Ugh. But I get his point - what do you use? "Gourmets" is not the correct term. So we move on.

As a sometime gardener, experimental cook and lover of connecting to history in its many forms, I've enjoyed digging into tales like this one. Who championed corn in America? Who salted the first fish? Living in the northeast, I come across many tales of the fishing industry and how it began, but that's on the grand scale. How did a resident of the Isles of Shoals prepare his cod in 1820? What was the drink of choice for celebrations in Concord, Massachusetts, in 1775?

So the author carries us through some of the most important moments in colonial American history, sharing with us the stories of Jefferson and his chefs, Washington and his distillery. Other "Founding Foodies" are identified for one-off contributions, but the bulk of the book focuses on the two Virginians.

Best of all, this book comes with recipes. I wanted to try one kind of quickly, and identified a concoction of rum, ale, sugar, nutmeg and eggs drank at the tavern where Washington gave his farewell speech. How's that for extended historicity? As my brother-in-law sipped the warmed brew on a cool September evening, we couldn't help think to themselves, "Dear God, people really drank this stuff?" But it was worth the taste, if just for the name: "A Yard of Flannel." And it wasn't 100% bad. Onto Whipped Syllabub!

What America ate and drank drove us to become the nation we are today. Imagine how we may have turned out on a different diet! It's beyond my head to figure that out, but there has to be a story there.
Posted by John Galluzzo at 5:26 AM No comments:

The Merry Adventures of Robin Hood by Howard Pyle 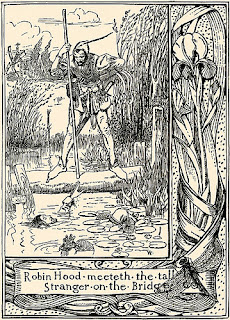 Why I read it: Another classic turned into a Disney tale; I wanted to see where they met and diverged.

Summary: The well-known story of the heroic underdog who stole from the rich and gave to the poor.

My Thoughts: Well, I feel sick.

I had no idea how Robin Hood's life ended, having never gotten to that point in his story before. In a way, it was the only way he could go. He couldn't be bested in combat, not after his many years in Sherwood Forest and the subsequent days spent at the side of King Richard in the battles of the East. And he couldn't fall prey to a misstep or a fall, as nimble and surefooted as he had always been. Bled to death by a nun, his cousin, no less. Who would have guessed?

But, to the story. Pyle was just the latest, in his time, to take up the tale. Robin Hood stories had been around for five hundred years before he took them on. But what flourish he added! The language alone is worthy of the read, the consistency with which he constructs the conversations full of "anons" and "tut" and other archaic-sounding turns of phrase. Immersion into the life of Sherwood Forest comes simply through this device, not to mention the sweeping descriptions of the lush greenery that is the land Robin and his men inhabit and love.

The story begins and ends darkly, with bloodshed and death, with even the hated Sherriff of Nottingham seeing his demise violently, but in between, Pyle writes with comedy. Merry is the correct word, and perhaps this book helped define the way we use it today. Robin does most everything with a smile on his face, robbing a bishop or shooting an arrow in a contest before the king. In the end he meets King Richard, who perhaps is the merriest monarch of all time, certainly a match for Robin Hood's roguishness at heart. Robin finds a kindred soul in the King, and accompanies him until that man's final days.

I wonder, too, how Tolkien was inspired by this telling of the tale, or of others. I suppose comparisons are inevitable, but at times the story had a Hobbit-like feel to it. Perhaps, though, terms like "a good, stout yew bow" are just bound to pop up from time to time in the genre. Either way, it left me pondering.

So what of this grave of Robin Hood, 1247 A.D., outsitde the Kirklees Priory? While Pyle's version of the tale is fanciful, how much truth lies behind the character of Robin Hood? It's a deep world into which I am excited to delve.
Posted by John Galluzzo at 5:11 AM 2 comments:

The Sea Their Graves by David J. Stewart 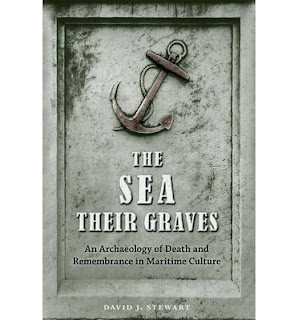 Why I read it: Chose it from a list to review for Sea History magazine, figuring that since I'm in the midst of walking graveyards to read 50,000 epitaphs in a year, and I'm a practicing mariitme historian, I might be sort of an expert on the topic, if (another) one exists.

Summary: "An archaeology of death and remembrance in maritime culture," the subtitle. How did Americans and Brits remember their dead lost at sea in the Age of Sail?

My Thoughts: So, I've "read," by now, dozens of graveyards in coastal communities. Along the way I've found numerous memorials and cenotaphs for sailors who died at sea, who were either recovered or lost forever, and each one tells such a different story: naval battles, shipboard accidents, shipwrecks. As far as our graveyards go, these stones provide oftentimes the only bit of color in an otherwise drab, macabre world.

David Stewart, as assistant professor at Eastern Carolina University, hotbed for maritime archaeology studies, makes the case that there is maritime archaeology to be conducted ashore. The last chapter of a shipwreck's story, for instance, can be told in the words and imagery symbolically placed on the tombstones or other items of remembrance for the sailors lost in those tragedies. In his book he focuses on British and American mariners lost in the Age of Sail, fully admitting that the whole story cannot be told until we make comparative studies in the other nations that plied the Atlantic during that time: France, Spain, the Netherlands, Portugal, etc.

What I really enjoyed about this scholarly look at the subject was the way it stepped outside of the bounds of maritime history to contextualize trends within it. Why was there an increase in religious symbolism on stones in the early part of the nineteenth century? The answer, he suggests, lies in the great religious awakening of the period; sailors who once considered a holy man aboard a ship a taboo were now being buried under crosses and clasped hands pointing skyward.

He also dives into the emotional side of the story. How do Americans today deal with the inability to recover a body from the sea, and has the trend always remained the same? What does the wording on a stone truly say about the people who did the memorializing? Were sentiments the same on state-sponsored, family-erected and comrade-funded stones?

For stone gawkers like me, this book is an instant Bible, one to keep on the shelf as reference as my own thoughts take shape. 33,000 stones in, I'm thinking that I not only have a short-term research project, but a lifelong hobby brewing. With a little focus, I'm sure I can contribute to this study, if it's wanted.