Inside the Winter Olympic Games by Marc Jenner 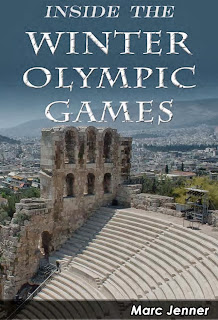 Why I read it: The author sent me a review copy, which was serendipitous, as I've always been a huge fan of the Winter Games.

Summary: A short guidebook to the Winter Olympics, with breakdowns of the various sports and their changes over time, many of the traditions and how they began, and more.

My thoughts: I have ties.

Back in the late 1970s, my dad was a hockey coach. Apparently, he was a very good one (I would later come to see it in action, on the ice, as I skated with some of his teams). In 1979 he was given an opportunity to coach some young men from Massachusetts competing in a tournament in Colorado to determine who would represent the U.S. on the 1980 Olympic team. Yes, those guys.

Being a hockey fan, I was drawn to the Winter Olympics, watching the 1984 team in Sarajevo and the 1988 team in Calgary. I was such a fan of the games that I taped - on VHS - the entirety of the Calgary Olympics coverage, and did the same in 1992. Tomba, Witt, Mueller...for two weeks, those names were my life.

So, yes, I know my fair share of Winter Olympics history. But I apparently didn't know that much, as Jenner's book surprised me with several facts. For instance, how abot this irony (or, I suppose, oversight): when the Olympic motto was chosen, "Citius, Altius, Fortius," it was done so in Latin. But, as his history states, it was the Ancient Romans who killed the Ancient Olympics, citing the fact they were contested in homage to Zeus. Shouldn't the motto be in Greek?

One facet of the Ancient Olympics that has long fascinated me is that the four year periods between the games known as Olympiads are actually used in the study of technical chronology. Ancient  texts can refer to things like "On the third day before Easter in the second year of the fourteenth Olympiad..." and historians (or perhaps, their mathematician friends) can pinpoint not only the year, but the day.

Jenner's book is one to keep handy for reference when the next Winter Olympics roll around. I've fallen off track with them, but now that I have kids who are near the level of understanding them, perhaps I'll find the time again to tune in. Perhaps just for my dad's sake, as he rests in peace up there in amateur hockey heaven!
Posted by John Galluzzo at 7:03 PM 4 comments: 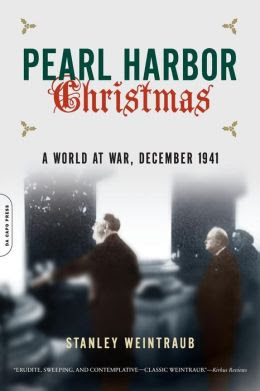 Why I read it: I have an undying fascination about where everybody was when the bombs fell on Pearl Harbor.

Summary: The story of America's entry into World War II, the terrifying first days in the Pacific, and the early strategizing of the Allies, all set to the backdrop of a world attempting to continue holiday traditions in the darkest of days.

My Thoughts: I don't know what the author has against General Douglas MacArthur, but it shows.

The two central characters in this story are the two biggest personalities of World War II, British Prime Minister WInston Churchill and American President Franklin Delano Roosevelt. But, of course, they were surrounded by so many other people with names we recognize: Beaverbrook, Eden, Eisenhower, Marshall, etc. They all appear in this brief telling.

As to MacArthur, his story is well-known. Forced to retreat from the Phillipines, he vows to return. The author, though, takes shots at him like a Japanese sniper with every mention of his name.Yes, MacArthur had his flaws, but wow.

A book like this one sucks me in. Yes, I already know the outcomes. I know where Roosevelt ends up, and I know what Churchill says and does in the years to come. But it's the focus on the moment, the minutiae that doesn't get covered in the broader histories, that make it so interesting. For instance, I had already seen the iconic "bulldog" photo portrait of Churchill, but I hadn't taken the time to look up the when and where of it; it turns out to be a major moment in this book.

It's unfathomable to us today in the States. The Depression was one thing; economic downturns be what they are, we will never (hopefully) understand how bad the Depression really was. But the country was also strictly isolationist at the time. To be roused from that self-induced slumber took something massive, something shocking. Even with 9/11 - while it opened Americans' eyes to a wider world picture - we can never fully understand the effect of Pearl Harbor. Add to that fact the notion that less than three weeks before Christmas, young men were joining the armed forces by the thousands, tearing families apart and throwing them into uncertainty, and you'll perhaps see what I mean.
Posted by John Galluzzo at 7:29 PM No comments: