The Kissing Sailor by Lawrence Verria and George Galdorisi 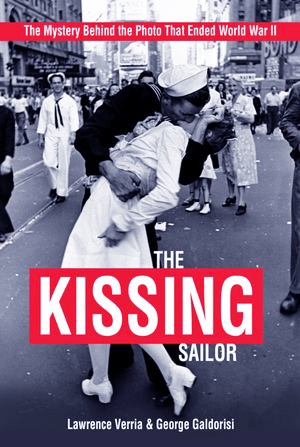 Why I Read It: My never-ending pursuit of every last story from World War II.

Summary: "The Mystery Behind the Photo That Ended World War II" (also the subtitle).

My Thoughts: It's one of those weird coincidences of history. After taking one of the most iconic photographs of the twentieth century, the photographer, Alfred Eisenstadt of Life magazine, never bothered to get the names of the sailor and (alleged) nurse who locked in an embrace on V-J Day, 1945 in Times Square. Let's face it - there was a lot of kissing going on in Times Square on that day, and in the tumult of activity, he probably figured such details would not be noteworthy. After all, the sailor and the nurse stood for just about everything that had to do with the day: passion, relief, and an unfathomable number of young Americans released from almost certain death in an invasion of mainland Japan.

So who were they? That's what the authors set out to find out.

There have been many pretenders to the crowns. Without picking sides, it's still correct to say so, as there can obviously only be one sailor and one nurse. And the authors make a point of stating that whether or not they are correct in their assertions, the many veterans who have come forward as "the" kissing sailor at least should be given the respect of being heard, after their service to and sacrifices for our country.

From the start, the authors' confidence is a bit overwhelming, so much so that it made me step back and say, "Well, now, they really have to convince me." Did they? I'm 95% convinced on the sailor, probably 100% on the "nurse" (who, if it really was her, was a dental assistant). There have been forensic studies conducted and testimonials shared from all concerned. The photographer made his choice of the nurse, and she carried that distinction to her death. But was she the one? Not according to the authors.

The authors write authoritatively, technically and succinctly. They bring out the pros and cons of each sailor claimant, including those of the man they ultimately choose, a point which I mentally considered early in the reading (would they detail the potential reasons why he was not the one, or shy away from them?). They bring Life magazine into the fold, in an almost personal way, calling the publishing giant out. After its initial call for the sailor to come forward (after which, Eisenstadt said, about 80 did so), Life stepped back and said that there would never be a conclusive answer to the question. Verria and Galdorisi believe there is one.

There will always be that contingent that says, "Why bother?" The picture stands on its own, and the subjects stand for us all. But if you're interested in knowing the names, of the heartache that ensued for decades after Life's call, this book is well worth the time.
Posted by John Galluzzo at 9:25 AM 2 comments:

Four Fish: The Future of the Last Wild Food by Paul Greenberg 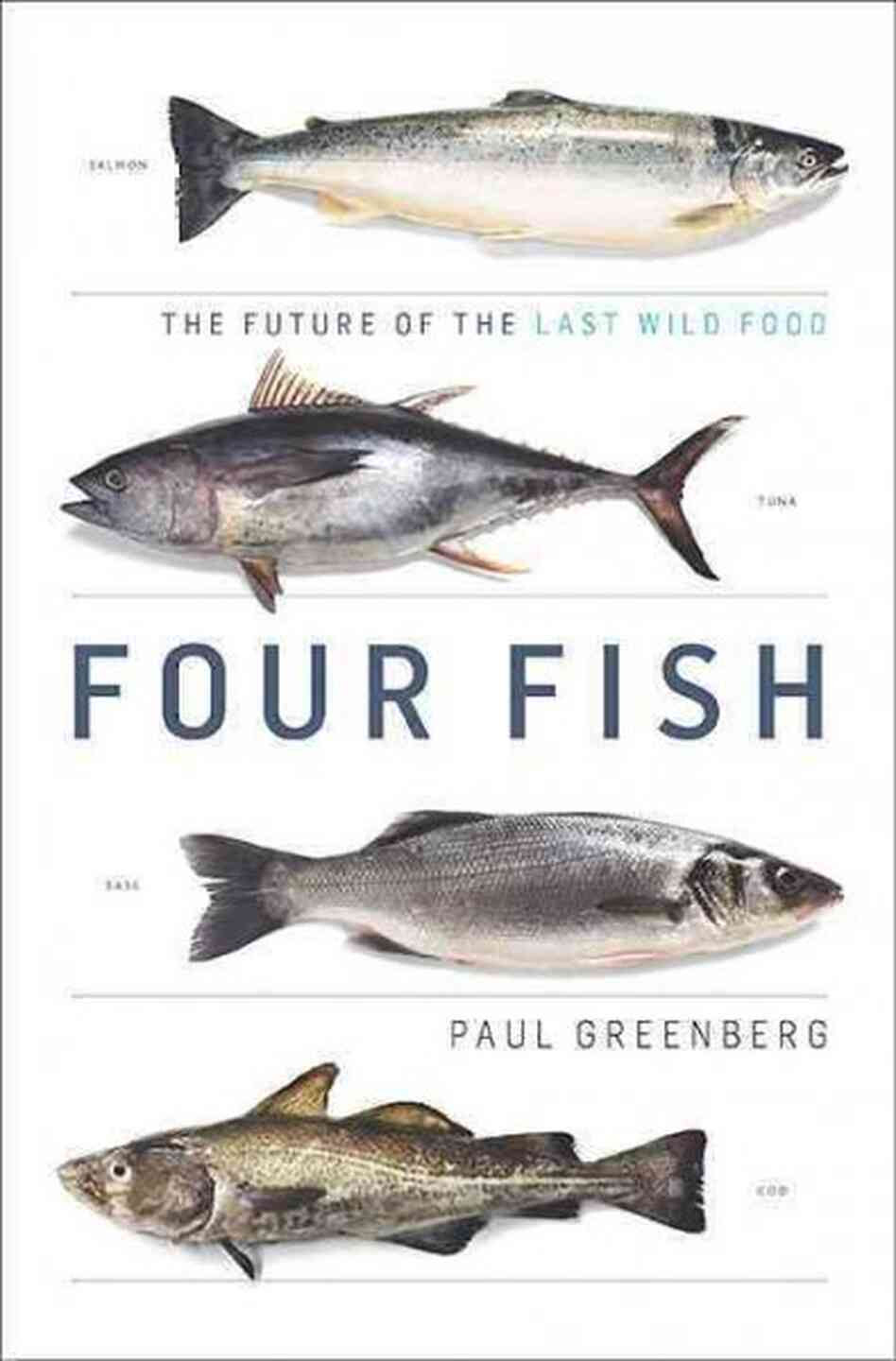 Why I Read It: Pisces. Will read anything having to do with water.

Summary: Salmon, tuna, bass and cod. Will they survive as wild fish?

My Thoughts: I think that if we really think about it, we will see that the oceans are the last wild frontier. Find an archaeological site on land, wrap a national park around it, and it's generally protected. Find a shipwreck offshore, try to do the same, announce its general whereabouts, then watch its artifacts walk away. Without policing, without a guard standing over it, the site is doomed to be plundered. The same goes with hunting. Designate terrestrial places where hunters are not allowed to go for species protection or human safety, and generally they follow the letter of the law. Fishing? Whaling? Not as much. Like one of the fisherman-turned-conservation strategists in this book said, you don't want to get between a hog and a trough.

We've drawn down the number of living creatures in the sea to scary numbers. Sadly, we've done the same thing with birds. We destroy habitat. We overhunt. We take what we want without considering consequences. We are causing a great extinction of life on earth. It used to be that the job was left to asteroids.

This book deals with the question of sustainability, using the four most common fish found in your grocer's display case as examples. The oceans are remarkably resilient. Give fish a little room to repopulate, and they will, even if drawn down to ten percent of their estimated historic populations. But we don't give them the breathing room to do so. We tax their populations to no end, save for in little corners of the ocean where states or countries hold rights over patches of water that they can actively police.

Do these fish have a future in the wild? Sadly, we can't say for sure. We genetically tinker with fish, tuck them into pens and "farm" them, even tuna, which need great distances of open ocean to truly be tuna. We release farmed salmon into rivers, but based on survival rates in the wild and in captivity, we set free individuals that may not have survived in the wild in the first place, therefore diluting the gene pool. We now scoop up young tuna from the sea to place in farms, therefore not giving them a chance to procreate in the wild, and still give out prizes for the biggest fish caught, usually the BOFFs, the "big old fat females" who are the champion breeders. We are taking away tuna's chance to breed at both ends of its life cycle.

The author suggests we stop subsidizing fishermen and let the industry truly find its level. If it doesn't make financial sense to fish, many fishermen will have to walk away and find other work. In his words we need an "artisanal sector of respectful fishermen-herders who will steward the species" rather than the current system of hunter-gatherers. He states we need more protected, fishing-free zones in the ocean. We need to protect unmanageable species like tuna globally, rather than considering only what's in our own backyard; treat tuna like we treat whales. And we need to protect the rest of the food chain. If we take the small fish out of the chain, we starve the large fish.

Standing where I am, on the coast of Massachusetts, I watch this story play out on a daily basis, with friends on both sides of the fishing/science fence. And I've seen the straddlers, not wafflers, but people who truly understand that fishermen and scientists can work together to find the answers as to why our cod are vanishing, for instance. The science seems rational, but how do you tell a third generation fisherman to pack up, go home, and go drive a truck for a living? In so many ways, our lives are tied to these fish, and changing their future for the better changes ours, and not always in the same direction.
Posted by John Galluzzo at 4:52 AM 3 comments:

Why I read it: The author requested a review on Amazon.com, and if there was ever a book in my "wheelhouse" (now there's a phrase of which I'd like to know the origins), this title would be it.

Summary: The opening salvo in the debate. These are the author's 100 greatest - what are yours?

My Thoughts: First, it isn't easy. I've written a few books myself, and twice I've taken on a similar format. In each case, I had to find different themes for more than 300 journal entries, and make them somehow come together cohesively in a narrative format (walking every day no matter the weather or my health, and walking every Massachusetts town in one calendar year). The author of this book had the same challenge: 100 games, 100 themes. Some naturally play themselves out, but some could be seen as repetitive if not given a twist by the writer. Give the author credit for finding those themes. I mean, how many times can you describe the Bill Russell era of Boston Celtics history without tripping over the same words over and over again?

As to the content, I have several thoughts. One, it's weird how Ted Williams never appears in the book. But that's the way it fell. Williams suffers for his lack of postseason success, as when you think about it, there are just far too many World Series wins, Super Bowls, etc. in Boston sports history to dive too deeply into regular season action. I don't think I saw Terry O'Reilly or Cam Neely's names in there either. But the logic works.

The author says he wants to get the conversation started, so here are some of my thoughts for inclusion in the next version of the book:

*The Red Sox final doubleheader of 1941; Williams goes 6-for-8 to raise his average to .406 on the last day of the season. OK, no postseason success, but what a day in Boston sports. Perhaps too much of an individual achievement, but if Roger Clemens' first 20 strikeout game is in the mix...
*May 13, 2007, the Mother's Day Massacre; the Red Sox pull an amazing ninth inning comeback out of their helmets to beat the Orioles, 6-5. Again, not postseason, but certainly setting up the run to the 2007 World Series.
*April 19, 2008, Bruins-Canadiens, conference quarterfinals; Marco Sturm scores the game-winning goal in Game 6 in stunning fashion, nearly pushing the Bruins past the Canadiens. The season came to a halt with the next game, but the energy created that night propelled the Bruins to become one of the best teams in the NHL for the next, well, who knows how many years, as they haven't really come down yet.
*How about the 1999 All-Star game at Fenway Park? The game itself was an afterthought, but the Ted Williams moment alone was worth mentioning.

The book is fun in that it challenges Boston sports fans to keep on their toes. One moment you're reading about Larry Bird and Michael Jordan squaring off and the next the names of the 1929 Bruins are being tossed at you. Books like this one bring back memories (heck, I was at the Tuck Rule game) just by invoking players you'd simply forgotten about because you can only keep so many names in your head (660, if I remember that study correctly!). But for every Tom Brady, there is a J.R. Redmond, a player from the past who played a role in a big game, big enough to be recorded for posterity, perhaps not remembered by name by every individual who saw the contest.

This book will be redone. The author decided to hold back its release so he could watch the 2013 World Series and put its games into the context of the book. And don't look now, but the Bruins are having another great year and the Patriots are the number 2 seed in their conference. And the Celtics...well, we love the Celtics.
Posted by John Galluzzo at 7:33 PM 2 comments: