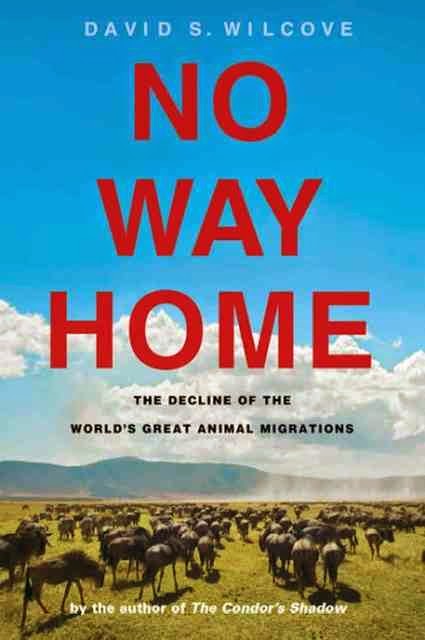 Why I read it: I'm a nature nut at heart.

Summary: The demise of the world's great migrations, on land, in the air and the seas.

My Thoughts: This story is more poignant this year than ever, as September 1, 2014 marks the centennial of the loss of the last Passenger Pigeon. The bird that once darkened the sky for hours in migration has now been eradicated from our planet for 100 years. The act was unconscionable. It seemed impossible, even at the time, but it happened.

And we all know about the American Bison, as nineteenth century overhunting diminished its numbers to near extinction. The same can be said of Right Whales. It seems that in the latter half of the 1800s we just perfected the art of mass slaughter of abundant animals.

But what we haven't paid much attention to is the habitat destruction and fragmentation that have disrupted the flow of migrations. The author discusses the plight of the Red Knot, a shorebird that has crashed in numbers because of our greed. We harvest and chop up Horseshoe Crabs for bait  in such numbers that the knots, which once fed on them extensively at a mid-Atlantic refueling station, can no longer sustain themselves on their northward migration to their Arctic breeding grounds.

How much of the American West has been fenced in? How much of the African corridors through which Springbok once migrated? And what does a sea full of lobster traps mean for a Humpback Whale in migration? And what have dams on major rivers done to Atlantic Salmon populations?

We, as a world, have to consider the entirety of a species' existence - breeding, migrating, wintering - if we are to preserve them. But we are talking about transnational collaboration between countries of varying economic capabilities, not to mention conservation sensitivities and political intentions.

Can it be done? Yes.

Why I Read It: I read Tolkien as a kid, have read a biography, love the movies and have played LOTRO (Lord of the Rings Online). Purchased at the MIT Loading Dock Sale.

Summary: One man's interpretation of The Hobbit.

My Thoughts: Somewhere along the way I must have read a book about reading a book. I mean, literary criticism has been around forever.

This, though, is a first for me, taking the journey of Bilbo Baggins through yet another set of eyes. So, let me set this up for you. The book itself is told through the eyes of a narrator, making it a third-person perspective. We are now taking a step back and through Olsen's eyes are seeing the journey from a fourth-person perspective; he sees the narrator as a character in the telling of the tale. Yet, in the end, as we know, we are told that Bilbo wrote the book upon which the narrative is based, There and Back Again. So we land somewhere about second-and-a-half perspective when all is said and done.

Olsen made this a straight interpretation on his part, meaning that he didn't attempt to pry into Tolkien's mind and say, "I think what he was trying to say was this." His Exploring is just that, a journey in itself, wandering alongside Bilbo, seeing the sights he sees and listening to the songs Bilbo hears from the elves, goblins and dwarves. It's also a psychological study of Bilbo himself, a scrutiny of which side of his personality, Took or Baggins (his family lines) wins out in each situation.

There are times, though, when Olsen evokes some offline Tolkien information, either from Tolkien's other works of fiction or his own explanations of the story. We learn about changes made to the original text when The Fellowship of the Ring came out, and what his original plan was for the killing of Smaug.

The question is, now, whether or not I should go back and read The Hobbit, which I haven't for a few decades, though I fear I've doomed myself by reading too deeply on the topic now. I took science fiction criticism classes at college and have never been able to enjoy a sci fi film again. Ehh...we'll see.
Posted by John Galluzzo at 4:24 AM No comments:

Rescue of the Bounty by Michael Tougias and Douglas Campbell

Why I read it: To review it for Sea History, the magazine of the National Maritime Historical Society.

Summary: We all watched it live on TV during Hurricane Sandy; the old wooden sailing ship Bounty is claimed by the storm and most of its crew is rescued by the Coast Guard.

My Thoughts: Some of these books are hitting closer to home than I would like them to.

First, I know one of the authors. Mike Tougias is a fellow Massachusetts writer, who flipped from nature topics to the sea. As he did so, I was navigating those same waters, and asked him to submit a few articles, book blurbs, really, to a magazine I was editing. I also arranged for him to speak at a few events I was leading in the region.

Second, I knew the boat. I'll never forget seeing Bounty at Fall River, near Battleship Cove, tied up to the pier. I knew it had a very cool history, appearing out in the South Pacific in the movie for which it was built, Mutiny on the Bounty starring Marlon Brando. I didn't know that Disney then lay in its future, nor that this event would ever happen. What I saw was an old sailing ship with a wonderful backstory that was in rumored financial trouble; I had no way of knowing what its ultimate fate would be.

Third, I can pinpoint personal proximity to Captain Robin Walbridge, who went down with the ship during the storm, to a specific date and place. About two decades ago, on the 200th anniversary of the launch of the USS Constitution, the Navy sailed her around Boston Harbor. I was on a friend's fishing boat that day, joining with the thousands of others in the spectacle out on the sea. Robin Walbridge was up on deck of Constitution, the fill-in for the Navy captain should he become incapacitated. It's a weird connection to make - and it's one that those other thousands can now make as well - but here it is.

The book is half the tale of the Bounty, and half the tale of the rescue. One can hear Tougias' sea adventure voice coming through as loudly as Campbell's technical knowledge of sailing ships. They make for a good tandem in attacking the topic. And they don't shy away from the obvious question, the one we all asked when we first heard the ship was in trouble during the storm: what the hell are they doing out there? It's the underlying foundation of the book. Who was Robin Walbridge and why did he make such a poor decision, in retrospect? One wonders how the media coverage would have been had Bounty made it through unharmed. There would probably have been a mid-page mention of the "harrowing tale" of passage on rough seas rather than front-page headlines screaming for the captain's head.

Since this book was completed (I read it in galley form) the Coast Guard has released its investigation report, pointing the finger at the captain. Aside from his own, the decision to sail toward the storm took a second life, ironically the sole crew member who claimed distant relation to Fletcher Christian, the master's mate on the real Bounty in the 1700s. But should Walbridge's entire life be judged by this one bad decision? It's hard to say "yes," but saying "no" doesn't exactly make one feel good either.

My last thought is the historic impact. When Titanic sank and the world realized there were not enough lifeboats aboard the ship, passenger vessels around the United States scrambled to come up to new codes for the number of lifeboats now legally necessary. Will there be any fallout in the historic sailing ship fleet governance, any rules implemented because of the actions of Walbridge and the Bounty crew? Or was the error in sailing toward the hurricane so egregious that no such rules about weather states, pump power, etc. need creation?
Posted by John Galluzzo at 7:44 PM No comments: