Undisputed: How to Become the World Champion in 1,372 Easy Steps by Chris Jericho 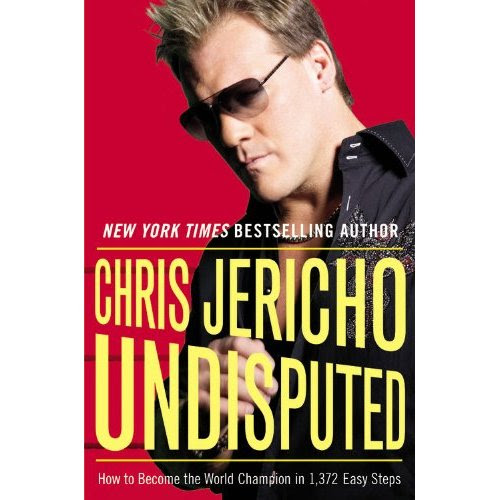 Why I Read It: Hulk Hogan won the WWF championship when I was 12. 'Nuff said. Hulkamania, once caught, is hard to shake.

Summary: Chris Jericho's journey to the WWE, out of it and back again, paralleling his life as a rock star, a burgeoning TV star and actor, and, most importantly, a family man.

My Thoughts: If there's one thing Jericho wants me to do in this review it's to use his new word "froot," a flexible term that can mean anything in any situation, but he's not going to get it. I refuse to use it.

The more I read abut the wrestling industry, the more I want to read about it. Jericho takes the peek inside the world of the pro wrestler one step deeper than I've ever been, talking about match construction, storyline writing, etc. I truly appreciated (both in this book and his first, A Lion's Tale, available in airport book stores everywhere) his brutally honest style.

Perhaps most importantly, Jericho did not even consider shying away from the most controversial of topics, the still-mysterious death of his friend and wrestler Chris Benoit. He has no problem defending Benoit, even to Benoit's children, when the rest of the world has labeled him a monster. Yes, his life ended in a monstrous way, but the rest of his life was not lived that way, Jericho argues. Jericho could have kept quiet or, worse yet, jumped on the bandwagon with everyone else, but his fierce independence and his belief in the rest of the truths of his friend's life would not let him.

The rest of the book is written with outrageously humorous takes on the events of his life. He is, if nothing else, both an egomaniac and humble. Many times both sides of his world meet and at those times he learns. He understands that he has been lucky to live the life he has, but also that it wouldn't have happened without his remarkable drive to succeed. Whether fronting Fozzy or challenging HHH for the world title, Jericho has given it his all.

Long live Y2J and all he has given to the professional wrestling business. I hope that he gives the same energy to his young family, and suspect he does.

Fine. I'll say it. This was one of the frootest books I've ever read.
Posted by John Galluzzo at 4:53 PM No comments:

Playing with the Enemy by Gary W. Moore

Why I Read It: Baseball and World War II? Come on. Do you know me at all by now?

Summary: A baseball prodigy is of fighting age when the big war starts, and risks his career by serving with the Navy; after several twists and turns, his career is over before it starts.

My Thoughts: I have to admit I was disappointed in this book if for only the nagging pulls of a personal pet peeve. But let me get the "good" out of the way first.

It's a fantastic story, one of hope, loss, redemption and rebirth. It's got everything a good World War II baseball story should have: Brooklyn Dodgers, Nazi mortar attacks, Patton, U-boats, and more. The protagonist is one for whom you want to pull. The story rises and falls where it should, and in the end the hero is just that, a man who rose above the forces in life holding him down and forged a great life for his family.

But much of it is fictional, in the sense that names are changed, characters are conglomerations of different people, and one can't tell what is truth and what is not. Historic conversations are fabricated (with lots of exclamation points). Characters are overemotional. The book's billed as nonfiction, but reads like a novel for the reasons stated above. And I'll be the first to admit that I have a problem suspending disbelief when something billed as fact is so hard to nail down as such.

Now, I am sure that the author has done his due diligence. One of my favorite lines falls at the end of the book, the kind of "a-ha" moment conclusion that gives one hope that truth has been realized, that history has been uncovered. I believe Gene Moore did most of what happened in the book. But being a historian myself, I have trouble with the blurriness.

All of that said, it was one of my favorite books of all time. (Weird, huh?). I think my heartstrings are pulled particularly hard by Gene Moore's story because it's told by his son. I, too, like many of us out there, am the son of a military man who went through his own hell but came out the other side as a better person in the long run. I understand where Gary Moore is coming from; the father-son bond is hard to understand if you've never been tied into it.

Here is where I would typically curtly sign off with a line like, "I just wish it was all true," but I won't. I love the story as it is and can bury my problems with it in a pet peeve cemetery. Gene Moore is a hero in the sense that most dads are. And that's good enough for me.

*Check out the December 2014 issue of Vietnam for the story of my dad's war experiences. I was privileged to write them up for the magazine, given the honor to memorialize my dad's contributions.
Posted by John Galluzzo at 6:58 PM No comments: