As You Wish: Inconceivable Tales from the Making of The Princess Bride by Cary Elwes

Why I Read It: I was a teen when the movie came out, had read the Goldman book on which it was based, and was simply immersed.

Summary: Cary Elwes (Westley/The Man in Black) recounts, spurred by the 25th anniversary of the release of the movie, the flubs, outtakes, laughs and more.

My Thoughts: Cary Elwes never wanted the filming of the movie to end, and so it goes with those of us who love the film. In all, we got an hour and a half of this mythos, the place where the border nations of Guilder and Florin are at odds, where Spaniards, Sicilians and giants last seen in Greenland work together in temporary harmony and where the Dread Pirate Roberts goes on and on pillaging, seemingly defying aging and time. We wanted more.

This book, 25 years later, gives us an extension (reading the William Goldman novel adds more, and YouTube has some interesting material as well). We are allowed back into the story. We are free to read aloud the lines we all know anyway in concert with Elwes as he uses them to set scenes. We get not only the voice of Elwes but of the director (Rob Reiner) and many of the actors, in constant sidebar quotes throughout the book. Only a few are gone - Andre the Giant, Mel Smith, Peter Falk - but the rest remember the entire experience lovingly. In fact, it seems almost too perfect, as Elwes doesn't have a bad word for anybody. This is a very positive book from cover to cover.

There are some interesting revelations as far as the personalities go. Wallace Shawn (Vizzini) not only had a truly "dizzying intellect" off screen, he was also seemingly ridiculously nervous about losing his part, so badly so that he gave himself hives. William Goldman loved his book so much that he couldn't bear to watch most of it being filmed. And then there was Elwes' broken toe. After reading this book, you will never watch the movie the same way again, if just because you'll be looking for the ramifications of that injury as they were captured on film. You'll also be looking for a prop from This is Spinal Tap that appears in the background because Mark Knopfler asked for it to be there.

We get to wonder about the alternatives. What if, as proposed in an earlier attempt at filming the movie, Arnold Schwarzenegger played Fezzik? Or Mel Brooks was Miracle Max? Or Danny DeVito played Vizzini? Or Michael Palin was the Impressive Clergyman? It might have been a very different world.

So there is no dirt, but then, I was hoping there would not be, to tell you the truth. For a few more hours I got a chance to live in that world again. And if Goldman ever finishes Buttercup's Baby, the follow-up novel, we get more, but he's not sure he ever will.
Posted by John Galluzzo at 5:34 AM 5 comments:

Feeding the Monster: How Money, Smarts and Nerve Took a Team to the Top by Seth Mnookin 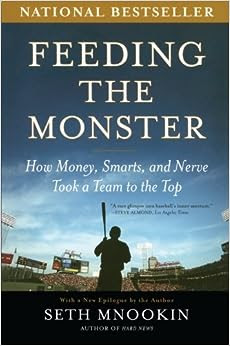 Summary: An embedded writer's view of the 2002 to 2005 arc of the life of the Boston Red Sox, including the building and crashing of the 2004 World Series champions.

My Thoughts: My initial gut reaction to the book told me that this book was going to be heavily pro-management, but I let it ride. The book opens with a history of the Red Sox and then profiles of the big three owner/executives - John Henry, Tom Werner and Larry Lucchino - before getting into the story of the world championship.

The beauty of a book like this, in which somebody spends the time to look deeply into the details of a story that unfolded right before our eyes is that the layers are exposed. As a thirty-something American male, I was deeply ensconced in my work and social lives at the time; I caught the general flow of information out of Fenway Park, and probably knew more than the average Bostonian, being a devotee of sports radio. But it would be impossible, in my situation, to know every detail of every story related to the 2004 World Series champs, especially since much of what is in this book was published for the first time in its pages. (For example, I had no idea owner Tom Werner had a ticket on Flight 11 on September 11, 2001, but, because a meeting got out early, he flew out early; or that a Red Sox pitcher was caught cheating with a Northeastern student when she posted a picture of them cuddling in a dorm on a social media site). The depth of the research and then the reflective nature of the interviews Mnookin conducted in the aftermath make for a fantastic combination.

Still, as I  read, I couldn't help but feel a bias forming. Perhaps it simply was, as Mnookin professed it would be, the truth. He and Henry agreed that the book would not be slanted in any way, but in the end Henry comes off as the most likable individual in the story. Many players and even other journalists are given negative personae through the tone in which they are presented, but, again, we get the softened, filtered version through our regular media. Mnookin had as close a seat to the action as anyone will ever have. If you read this book, expect to have some heroic facades (as heroic as we make our athletes out to be) crumble. Expect, too, to do some self-reflection, if you are a Boston sports fan.

The book culminates not with the Sox defeating the St. Louis Cardinals in October of 2004 (I was in Norfolk, Virginia, when it happened; where were you?), but with the schism between Larry Lucchino and Theo Epstein and then the tenuous rebuilding of their relationship. And it's funny knowing the future beyond the book. This tale ends in 2005, projecting 2006. In 2007, the Sox won it all again. I wonder if Mnookin felt a twinge of regret, that perhaps an opportunity had been missed. But then, who can predict baseball futures? Bill James?
Posted by John Galluzzo at 4:30 AM No comments:

The Lion, the Witch and the Wardrobe by C.S. Lewis

Why I Read It: Reading the series with my kindergartner as "chapter books."

Summary: Four children in World War II London are hustled out of the city and into the home of an elderly man, where they find a magical wardrobe.

My Thoughts: Perhaps it's just the struggling dad in me, trying to find the next great great story to tell, but it seems the concept comes naturally. A child peeks into something and finds another world. For us, it's been everything from a glass of milk to an imaginary tube in the vernal pool behind our house. Of course, since my little guy's world is populated with pop culture characters, the tube leads to Mario and Luigi, and the world on the other side of the glass of milk was Minecraft.

But those worlds just got him warmed up for Narnia. While there was a language barrier to hurdle (quickly changing "Father Christmas" to "Santa," for instance; yes, he makes an appearance in the book), the story is action-packed enough to be fun for his little mind. Even just the concept of swords, shields and potions of healing get him thinking. Powerful talking lions and evil witches just add to the fun.

A few things went over his head, like the concept of the non-passage of time, like when the children emerge from the wardrobe after what felt like years inside, only to find that they had not aged at all. But the basic concept of good and evil is there, of triumph over adversity. I hope he is having enough fun to consider reading them again in the future. I'll be sure the books are packed away so that he can.

For some reason, I had never read these books before, so it's an exploration for me, too. I was certainly a fantasy and Sci-Fi geek as a kid, but perhaps I just discovered Lewis a bit too late. I'm glad I'm getting the chance to relive a little of my childhood for the first time, sharing it with my son.
Posted by John Galluzzo at 12:19 PM 2 comments:

The Predator Paradox: Ending the War With Wolves, Bears, Cougars and Coyotes by John Shivik 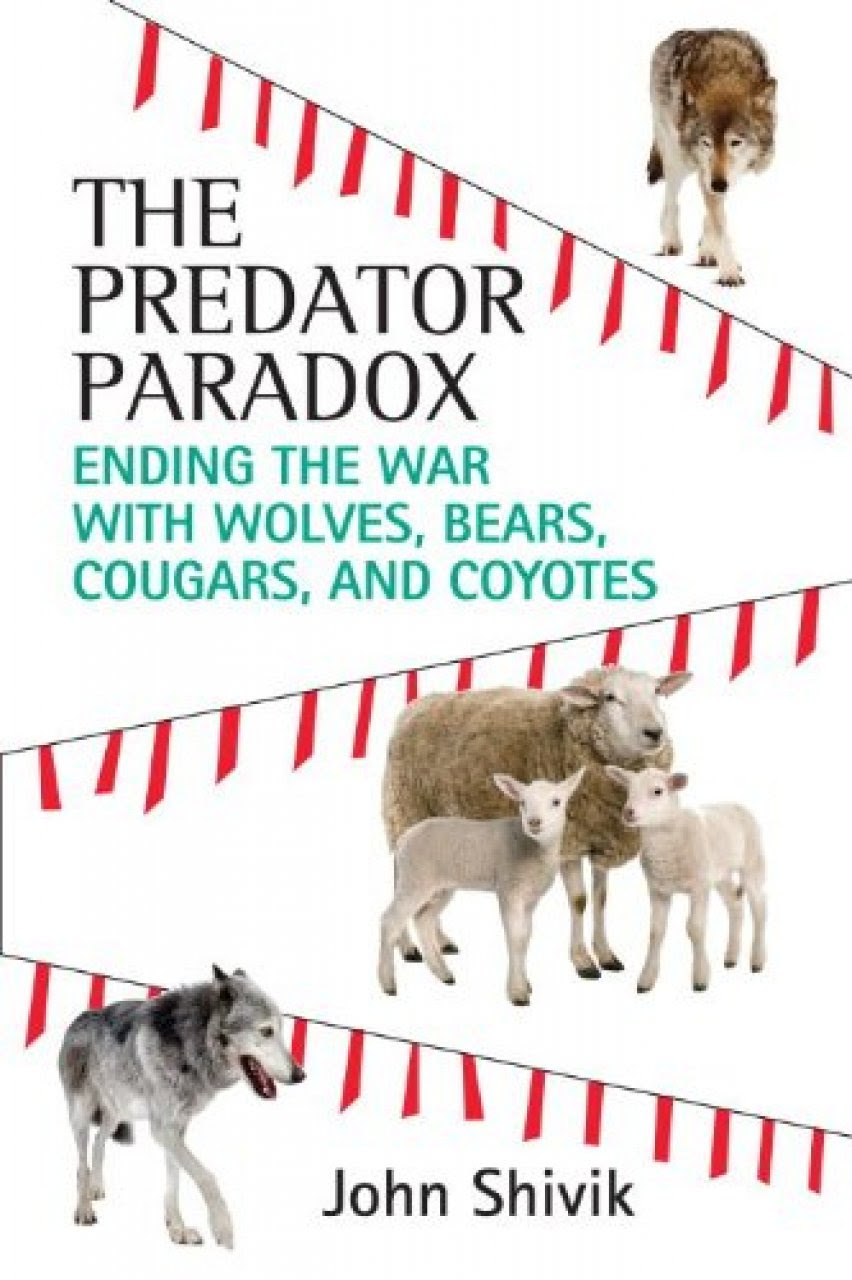 Why I Read It: Full-time job is as a naturalist.

Summary: The author tries to find the bridge between the loss of livestock and the wholesale retaliatory slaughter of apex predators.

My Thoughts: This book boils down to one pertinent fact.

When we consider the depredations of the country's top natural predators on livestock, on people and on pets, etc., oftentimes our reaction is to make a big sweeping move. Wolves killing sheep? Kill all the local wolves. Grizzly bears attacking campers and hikers? Kill all the bears. But we know the domino system will be in effect.

If we kill the top predator, its main wild prey can run rampant. Kill all the hammerhead sharks and we'll be overwhelmed on our beaches by overabundant stingrays. With no natural predators in Massachusetts, where I live, white-tailed deer have become a nuisance species, spreading Lyme disease and devouring forest floor habitats, not to mention the front yard tulips.

But, Shivik argues, supported by the numerous ongoing experiments he covers in this book, even just destroying the local population of predators is the wrong way to go. We tend to think that each and every wolf is the same as the next one; if one wolf is a sheep killer, they all are. But we are finding that, just like us, there is individual variation in the way of personalities in the world of our biggest mammalian predators. Oftentimes innocent bystanders are being picked off in the war against them.

But how do we know who is a sheep killer and who is not? And are there ways that we can train wild predators to shy away from the desire to take livestock? Shivik walks us through the thought process. Can we give visual or olfactory reasons not to kill? Will a distasteful scent tip a bear off that attacking a hiker might be an unpleasant experience?

One way or another, the author argues, we have to stop the war, lest we interminably damage the balance in the ecosystem (more than we already have). Yes, we have questions of economies to consider; we can't let our livestock producers live with constant losses. But we also can't let the wild world down, either.
Posted by John Galluzzo at 4:54 AM No comments: