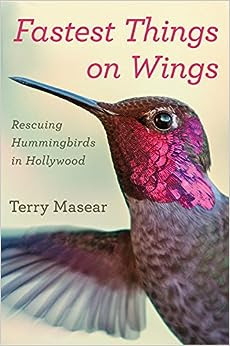 Why I Read It: An Amazon Vine opportunity; I've actually been in on the capture and banding of two extralimital hummingbirds on the South Shore of Boston (one Allen's, one Rufous).

My Thoughts: Like many other pursuits, hummingbird rescue and rehab on the West Coast is one of those "be careful what you wish for" propositions. The author begged to get into the world, and now can't get out (not that she's hinting that she wants to). The responsibilities, once accepted, are far too great to just step away. Too many lives hang in the balance. If she truly feels how she says she does about hummingbirds, then she knows she is in this for life, hers and theirs.

The author starts simply, finding an injured bird and bringing it to a rehabber, volunteering to help. She soon starts her own rehab center, and before she knows it her summer life is altered with job changes, the inability to take vacations - or even leave the house for 30 minutes - and quick trips to the market to purchase as many rotting bananas as she can find. Hummingbirds specialize in catching the fruit flies that find the bananas.

Ultimately, she picks up the jadedness many people working with wildlife get when forced to interact with the general public. She has to give the same educational lessons over and over again, and will ad infinitum, as there will always be another person calling in who either has done something wrong, ignorant of what is right simply because s/he didn't know, or that is so wrapped up in self that s/he decides that despite the admonitions of the trained rehabber, their way is just better. Alternately she is occasionally buoyed by the odd individual who will go above and beyond, sometimes literally, to rebuild or replace a fallen hummingbird nest.

One of the storylines in the book is the return of a previously injured bird, four years after first encountered. Strangely, if not for a quirk of the rehabbers trade - many of them don't, according to the author, band the birds - it wouldn't have been much of a tale. Banders attach small rings around the legs of birds with numbers on them that are stored in a central database; when a bird is found it tells a lot about the individual's movement. In this way, one bird can tell a lot about its entire species. Anyway, because the bird in question had such obvious markings, it was easy to make the identification the second time, after the L.A. road grime that coated it was washed away; but had she banded it in the first place, the author would have recognized it right away.

The book is a testament to the great lengths to which people will go to help wildlife, and in that sense, it is heartwarming, when we consider how much people do to harm wildlife, either directly or indirectly, through money-grabbing development of precious habitat or the use of products that place toxins in the environment. The author carries us through just one season of hummingbird rescue in the greater Los Angeles area. For her, there is much more to come.
Posted by John Galluzzo at 4:03 AM No comments: