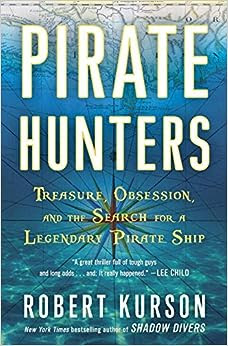 Why I Read It: Pulled from the Amazon Vine line-up. Shipwreck books are usually of great interest for me, with my background in maritime history.

Summary: A team of divers set out to find a treasure ship, then switches course to look for a pirate ship.

My Thoughts: I met John Chatterton, one of the main characters in the book. He has no reason to remember me. He was filming an episode of Deep Sea Detectives for the History Channel in Boston Harbor and the Coast Guard invited me out onto the water with them as he and his on-screen partner read their lines. I stood by and watched from behind the camera on the top deck of a 47-foot motor lifeboat.

The book carries an interesting narrative, even if I find fault with one main issue. The ancient pirate whom they - divers John Chatterton and John Mattera - chase is over-inflated in historical importance. If Joseph Bannister was as notorious in the pantheon of pirates as the author professes he is, wouldn't we have heard of him by now?

In his defense (the pirate's), he pulled a badass move, for sure. He turned from regular seagoing merchant to pirate and forced a showdown with the Royal Navy that left the latter in retreat. His story is certainly interesting, now that it has been dusted off, but does he belong, as the author states, with William Kidd and Blackbeard?

We are treated with views into the lives of the two divers. John Chatterton is a Vietnam vet who took battlefield chances others would not, a medic who ran through enemy fire to retrieve his wounded comrades. John Mattera grew up with New York mob ties and his own entrepreneurial illegitimate businesses, until turning to police work and ultimately his own protection agency. They find their common ground in diving work.

The story brings us through their journey, from the moment they decide to abandon a treasure ship search to find a pirate ship instead to the ultimate successful conclusion of that search. The journey includes all sorts of side adventures, from gun play in the streets of the Dominican Republic to quiet moments of discovery in Spanish archives.

The story is oozing with bravado and machismo, both modern and historical. And it moves well, as the divers seek to read the mind of their 17th century prey, Bannister. If they find him, mentally, and understand how he thought, they find the ship.

If you pick it up, read it like an adventure novel, and you won't be disappointed.
Posted by John Galluzzo at 4:59 AM No comments:

The Catcher in the Rye by J.D. Salinger 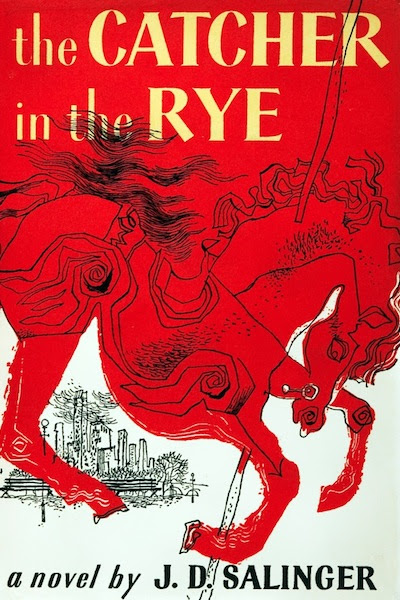 Why I Read It: I think technically it's illegal to be American and not read it.

Summary: Teenager Holden Caulfield is booted out of yet another school and finds his way home, stalling for a few days to arrive about the same time as the letter he expects is being sent to his parents.

My Thoughts: I knew him.

I couldn't believe when I started reading the text how much Holden Caulfield, who narrates his story directly to us, sounds exactly like a great uncle of mine, one who was born about the same time as the character. The ego, the disdain for everybody else, what they do and how they do it, it was all there. Even specific repeated words and phrases - phony, hot shot, etc. - were words I heard every day from my uncle. Having heard the language before, I couldn't put it down.

Our protagonist is kicked out of prep school and sent packing. He could never focus on his studies, save for his English. Instead, he spends his time scrutinizing everybody in the world around him, finding them all to be phonies or bastards, to use his words. He holds respect for a bare few, his younger sister and his dead younger brother among them. The book is one long complaint, as he wanders home into New York City, looking down his nose in his twisted illogical way at every person he meets.

The problem with Holden is that he doesn't know when to stop, when to let his thoughts be thoughts and not leave his mouth. Numerous times while reading the book I found myself thinking, "No, Holden, don't say it!" or disbelieving that he had used specific words in specific situations. He is unfiltered, and it costs him time and again.

He is certainly contemptible, in need of intervention-style learning moments. But he has a soft side.

He has a surprising altruistic streak. In one of his many encounters with random people - a pimping hotel elevator operator, young women visiting the city from Seattle, administrators at his old elementary school - he meets two nuns coming to teach at a school in the city. He offers them $10 for their charity and indulges them in conversation. His ultimate dream, even beyond the twice expressed goal of running away to a place way out west, or up in New England, away from all people, is to save children from hurting themselves. He wants to help, in many ways, but can't get out of his own way.

Holden is disillusioned with adulthood, yet is struggling with getting there and trying it out for himself. He talks big about sex, and then when it is practically forced onto him by a prostitute he somewhat mistakenly solicits, he can't follow through and announces that despite his boasts, he's a virgin. He talks his way into a couple of beatings. He generalizes, constantly. He lets the actions of one person represent entire classes of people: the elderly, teachers, guys who visit his room at school, etc. He instructs us on why we should dislike just about everybody.

It must have been wonderful to read this book when it was thoroughly controversial across the United States, in simpler times when even just the language was enough to initiate book burning parties. But it was certainly wonderful to read it now, nearly 60 years after its release.

Why I Read It: Another "find" in a box I had dusted off. It had long been on the list.

Summary: The introduction of logotherapy told in two parts, a description of the practice preceded with the author's memoir of life in Nazi concentration camps.

My Thoughts: I often wonder how people a hundred years from now will react to stories of the Holocaust. Will it be diluted through time? We are just now losing the last of the "greatest generation," so that means that I have lived among them for nearly half a century. The people of World War II have always been a part of my life.

I guess that's why the stories have always affected me so deeply. People of my grandparents' vintage were among those gassed or otherwise atrociously treated. And when it came to such levels of understanding, it probably helped to grow up in a town with a strong Jewish population.

But Frankl's memoir struck me if just in two sentences. I guess at this point I have no expectations for how low the Nazis could sink; the depths of their cruelty no longer shock me. But Frankl made one statement that jumped out at me. He mentioned how life in the camps was the ultimate game of survival, and that in many cases, the good guys, the men and women who thought of others first, lost. In his words, it wasn't the best among them who survived the ordeal. I think I've always just believed that the prisoners in the concentration camps had no free will whatsoever, but Frankl's book changed my viewpoint on that idea. Some men and women went to great lengths to survive, often at the expense of others.

The second sentence that got me presented me with a physical reality that just struck a chord. He talked about being so weak that to take a step up into a building he had to put his hands inside the doorway and pull himself in. We've all seen the pictures of the gauntness of the concentration camp prisoner. But I guess that that's it; they're still pictures. I never thought too much of what it must have been like to try to do the simplest tasks.

I wasn't as impressed with the second half of the book, but it's not for me to really tear it down. The fact that any man or woman was able to survive the ordeal and think so deeply about the psychiatric side of concentration camp life - of the prisoners, of the guards, of the liberators, etc. - is amazing. To have gained the attention of so many millions and tell the tales as Frankl did, is astounding.

For me, personally, the timing was odd, too. The last line in the book (1984 edition) has to do with Hiroshima, which was the subject of the book I had just put down before picking this one up. I guess, in the end, as long as texts like this one survive, perhaps there will be less dilution than I fear. If we are supposed to learn from history, this is one lesson we should never forget.
Posted by John Galluzzo at 7:09 PM No comments: