Why I Read It: This season, reading about the Red Sox was better than watching them.

My Thoughts: For a long time, I couldn't stand Dan Shaughnessy. I always felt like he was that smarmy, needle-nosed kid in high school who had to point out that you did your math homework wrong, or that you had used the wrong version of to, too or two. Many of his article themes in the Boston Globe seemed to be prying, making more out of minor little topics than they really needed to be.

But Dan (Boston sports fans who follow the literary side have lived with him as part of their community for about three decades now; the first name feels appropriate, though there are many that call him simply "Shaughnessy") grew on me with this book. Perhaps he has softened with age. Perhaps I have. But there was one key to that change for me.

Dan has a long-running feud with pitcher Curt Schilling when he was in town, the two often at odds on many topics. It would have been very easy for Dan to take shots at Curt in this book, but he didn't. He treated him very fairly, even praising his pitching performances when warranted (as I'm sure he would say one should). I have a personal reason for standing in defense of Curt, and will always look to him with respect. I was heartened by the even presentation of Curt's ups and downs, flaws and successes, as they related to Francona's time in Boston.

As to the main content of the book, it was fabulous, bringing truth (at least as seen by one set of eyes, Francona's) to many of the longstanding stories around the rise and fall of the Red Sox. I'm sure there are plenty of points in the book to which Red Sox ownership might point with a furrowed brow and a shake of the head, but until that happens, I'm happy to have read these pages.

The Red Sox went on a pretty damn good run with Terry Francona at the helm. The team applied new game day prep strategies to get the edge they needed, and sometimes different divisions within the team (baseball ops, field staff, ownership) found themselves at odds with one another as to what was appropriate and what was just too much. Somehow, with too many cooks, this kitchen served up two World Series championships in four years.

This story, though, digs deeper than the Red Sox and into the life of the manager, openly exposing his personality (as if after eight years with the Sox he had anything left to hide) and sharing his brightest and darkest moments. It details, too, how insular the baseball world is, the ways in which the constant shuffling of players and coaches from city to city from year to year causes paths to cross numerous times in the sporting life. Being second generation, having grown up in clubhouses, Terry Francona has a network almost second to none. There are very few degrees of separation between him and most of today's Major League Baseball players.

A bonus is the in-depth reporting on the general manager at the time, Theo Epstein, and the story of his relationship with Francona. Having parted ways with the Sox shortly after Francona, Epstein lets his opinions fly as well.

I'm trying to place this book in the pantheon of "best baseball books I've ever read," and can say it's right up there at or near the top. I'm not sure exactly where it falls, but, wow, was this one fun.
Posted by John Galluzzo at 3:42 AM No comments:

Ladies and Gentlemen, the Bronx is Burning by Jonathan Mahler 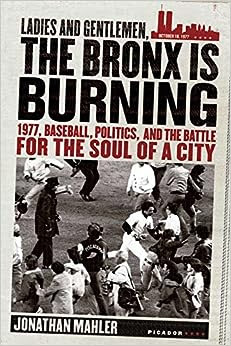 Why I Read It: On a baseball kick, and the year the book covers was one of the first I remember.

Summary: "1977, Baseball, Politics, and the Battle for the Soul of a City" (the subtitle)

My Thoughts: As a kid, I knew that folks around me had a distaste for New York City. Yes, there was a particular Boston bias that festered around the sports world, about the Yankees, the Rangers and Knicks, but it ran deeper than that. New York City wasn't safe, in the sweeping, all-encompassing sense of the word.

This book has helped me understand why all the adults I knew felt that way. I've since come to love New York City for what it is and what it represents on the grand American scale, though I will be honest. I can't stand the traffic. Heading south from New England either means sitting in it or driving around it. We're bottle-necked up here, but then, New Englanders are like many other people on the planet who see their little corners of the world as the "most estimable place" on earth, to quote Thoreau. Perhaps we don't mind.

What an amazing year 1977 was for New York City. Bella Abzug, Ed Koch and Mario Cuomo were all competing for the mayor's seat. A single night without power led to millions of dollars' worth of looting that set the city on edge. David Berkowitz, the Son of Sam, finally came to justice, telling the world that his neighbor's dog told him to kill. Add to this mix George Steinbrenner, Billy Martin and the Yankees' newest purchase, Reggie Jackson.

I remember the three home runs against the Dodgers in the single game in the World Series. I remember all the other names involved with the Yankees that season - Rivers, Randolph, Guidry, Hunter, etc. (heck, they were all on my baseball cards) - and even remember listening to one game mentioned in the text, blanket pulled up over my head, radio pinned close to my ear so my mother wouldn't hear. Gator Guidry struck out the first three Red Sox batters in succession on ten or eleven pitches to the rousing - and what I remember sounding pretty belligerently scary to a six-year-old - cheers of the Yankee Stadium crowd.

What I didn't know at six was the undercurrent. I had no idea what "race" even meant in those days unless used with qualifiers such as "three-legged" or "motorcycle." I knew Reggie Jackson as a ridiculously powerful left-handed hitter; I did not know he felt he was feeling the strain of being the first black superstar to wear pinstripes. I had no concept that elections could swing one way or the other based on how a person stood on issues that pertained to the needs of a community of people with different color skin. I was clueless, as a six-year-old probably should be. We grow up soon enough.

Their is bliss in ignorance, for sure, and I probably could have gone my whole life just remembering 1977 as the Year of Reggie, but I am so glad I read this book, as Reggie is now in context for me.

I love when things are in context.

Posted by John Galluzzo at 5:16 AM No comments:

The Game by Ken Dryden

Why I Read It: Got the bug for a good hockey book, and this one came highly recommended.

Summary: Ken Dryden walks us through the last days of his NHL career, with an amazing perspective on the game, its players and the way they've both changed through time.

My Thoughts: Having grown up in the hockey boom in the northeastern United States, when Bobby Orr was king, I've always loved the sport. I played on the street, I played in rinks, I played right up into high school before an odd, ancient injury pulled me from competing with the pack out on the ice. My dad never played, but instead coached, on a very high level, with the 1980 junior Olympians.

I grew up in the Boston area, so hockey life was Bruins life. The Canadiens were the enemy, the Yankees to our Red Sox. I might not have ready this book twenty years ago. But now I'm older, wiser. I have perspective. I only hope someday to have the amazing breadth of perspective that Dryden does.

Dryden shared the same youth I did. A ball, some sticks, a bunch of kids and a net, and it didn't matter where we were, a hockey game could break out at any moment. We even brought our Italian exchange students into the mix one summer. We had to. They were here, and we had to play hockey. We couldn't just stop for three weeks because they were here. When we went to Siracusa, we played soccer, because they had to.

It was all-consuming, for him and me. But he had the skill to go to the top. His teams, with him in net, won six Stanley Cups in eight years, a remarkable achievement. They were the Yankees of the '50s, the Celtics of the '60s. After that, he burned out on the sport, packed it in and walked away. Next came time for reflection, and reflect he did. In this book - touted as the best sports book ever written solely by an athlete - he speaks openly and freely about fame, about fans and about owners. He shoots straight on how he believes yesterday's superstar athletes would fare today, and on how the Canadiens "got up" for games against the Bruins. A good opponent made the game worth playing. This fact, for me, was a wonderful revelation. Sports talk radio hosts in Boston love to downplay rivalries, saying that teams like the Canadiens don't care about the Bruins when they are at the top, that they see them as just another team on the schedule. Dryden says otherwise.

In the end, it's "the game" - not hockey, but whatever sport one ties himself or herself to for life - that is the subject of the book. It's the whole lifestyle that comes with it, the locker room, the personalities, the travel, the ups and downs. For Dryden, the sport was hockey. The game was much more.

In this edition, the 20th anniversary, he adds another chapter on life after hockey, with a fantastic review of where hockey has gone globally since he stepped off the ice. His perspective, as stated, is grand, the text magnificently written. Having lived with hockey my whole life, I've watched it change, but never really stopped to truly look at how. It has blended through time, one phase melding into the next, but it is certainly not the same game I started with four decades ago.

I went looking for a great hockey book, and I found it.

(Extra note - there is a quick, really-not-noteworthy mention of my hometown of Hull, Massachusetts, in the book. He mentions it in relation to landing at Logan Airport in Boston. It has no bearing on the story in any way, but it was certainly a strange moment reading the book and seeing the name of the town in lights in this way!)

Posted by John Galluzzo at 11:19 AM No comments: