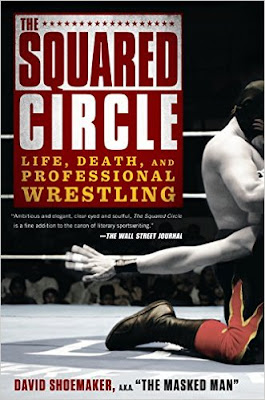 Why I Read It: I already knew all the players.

Summary: The common theme is early death, the repeating story of the American professional wrestler's life.

My Thoughts: I'm torn over whether or not professional wrestling needs this quality prose. But then, professional wrestling exists in two realms, real and fantasy. The fantasy side, at its best, is certainly worthy of the best words we can throw at it. When we suspend disbelief (and the author, David Shoemaker, tends to believe we've been doing that for longer than we let on) and we let the story play out, we cheer and jeer, we live the story along with the characters on stage.

At its worst, outside of the ring and backstage, the drugs flow, the steroids pump through the veins; murder has even occurred. The people we root onto victory in the fantasy world are can either match their stage personalities or be diametrically opposed to them. Heroes are villains and vice versa; we can't trust what we see in the squared circle. Sometimes, like the square peg in the round hole, the character does not always fit the wrestler.

Shoemaker's book features numerous dead wrestlers who passed before their time. Many fell around the same time, when drugs overwhelmed the sport. At that time, I was being weaned from watching it regularly, but the news still made it my way. Kerry Von Erich was dead. Really, another Von Erich, so young? Junkyard Dog was in a car accident. Andre the Giant was finally overcome by his acromegaly. They seemed to fall like flies.

Shoemaker weaves the greater themes of American history into the narrative - race, family, geopolitics etc. - and brings us to a closer look at what we saw flash before our eyes in the arenas and on TV, an extended video review of the matches we saw live. We all "knew" that a head butt from a black wrestler or a Pacific Islander was more painful than one from a white man. Why? An overhead chop from a Native American Chief (whether or not he was an Italian named Joe from New Jersey) hurt more than one from an Italian named Joe from New Jersey. Why? The author walks us through the past that made this bizarre world come into reality.

In a way, for me, the look back through time was eye-opening. In at least one instance, I can say that I was there. One chapter tells the tale of the "Macho Man" Randy Savage, pinning his winning of the WWF Intercontinental Championship from Tito Santana at the Boston Garden as a seminal moment in his career. The fans cheered that night as if Hulk Hogan had won; Macho Man was the heel, but the power of seeing a title change, of seeing the new guard take out the old, of seeing history (scripted or not) right before our eyes, was powerful enough to make us root for the dark side.

Yes, morbid curiosity drew me to this book. Although "life" appears in the title, the book is predominantly about death.

Posted by John Galluzzo at 8:11 AM No comments:

The Rebel League by Ed Willes 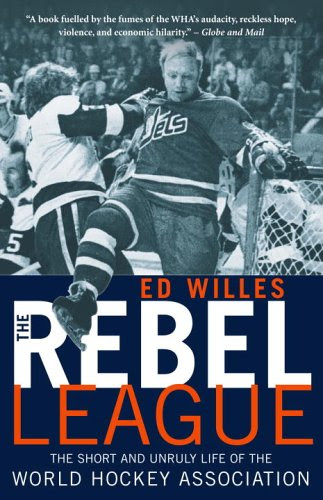 Summary: "The Short and Unruly Life of the World Hockey Association" - also the subtitle.

My Thoughts: I wish I was there.

Unfortunately, I was born just too late to truly appreciate the beauty of the WHA. It closed up shop when I was 8. As far as I knew when I started watching professional hockey religiously, the Hartford Whalers had just always been a part of the NHL. I had no idea that they had just merged into the league, or that they had been part of the upstart movement that was the WHA.

After reading this book, I'm left to wonder what impact a TV contract would have had on the league. Without it, the league still pulled in thousands of fans per game, somewhat akin to what Major League Lacrosse teams bring in today, perhaps a little higher on average. Had they had television in the markets where they played, outlying cities the NHL had not yet touched, like Houston, Quebec City and Winnipeg, and had they been able to deliver some of the one-of-a-kind entertainment that league provided, would they have drawn bigger crowds, increased their revenue and had a longer run?

So much of the reason for the league's existence was to buck the establishment, to free the players, and in essence, the fans. The NHL had its system. The rich got richer and the players got beat up, financially. The WHA imported the best European players and drafted kids considered "underage" by the NHL. They had started to create a greater product than the NHL was willing to produce. In time, it would have proven to be the more entertaining league (if it wasn't already by 1970s standards) and therefore would have grown.

It was, for instance, the league where Wayne Gretzky got his professional career started, and Gordie Howe played hockey with his two sons. It was where Bobby Hull made his last stand, reinvigorated by the arrival of two European players who helped revolutionize the North American game.

It was also the home of the players that would inspire the movie Slapshot, not to mention the harbor of refuge of some of the world's wackiest goalies. One claimed he was living several lives at once, essentially unstuck in time like the main character in Kurt Vonnegut's Slaughterhouse Five.

So yes, I wish I had seen it rolled out, though I wonder if I would have paid any more attention to it than I did the USFL or the XFL. Today, with the constant informational assault under which we daily stand, my guess is no. But in the '70s, in a town that didn't have an NHL club? I bet you I would have. And I'll tell you one thing - had the league had Ed Willes writing about it during its heyday, they would have had something else great going for them. If you get hockey, you will openly laugh at the story of the league as told through his words.
Posted by John Galluzzo at 7:34 AM No comments: 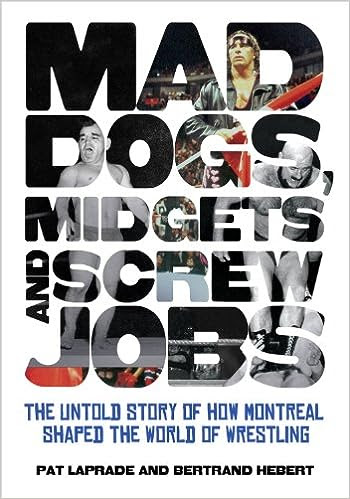 Why I Read It: A continuing fascination with the history of professional wrestling.

Summary: "The Untold Story of How Montreal Shaped the World of Wrestling" - also the subtitle.

My Thoughts: There's a belief out there (a cheap way of saying that I don't remember where I read it or heard it first, but I know I didn't make it up) that says that in whatever age you became a fan of a particular sport, you consider that the "golden age" of that sport. For instance, if you were a Yankees fan in the '50s, in the '70s you looked back with wistful reverence at Mantle, DiMaggio and the gang. You probably don't like the designated hitter rule, free agency, etc.

I used to think that I was stuck that way as well, but I think my broad perspective as a historian has steered me clear of such pitfalls. But, in a weird way I long for the old days that happened before what should have been my golden ages.

I was 12 when Hulk Hogan ran over the Iron Sheik and took the WWF title.I witnessed the beginning of the end, when professional wrestling's territorial system broke down and Vince McMahon's monopolistic machine ran roughshod over North America. One day I was in my living room watching the Grand Wizard lead Sgt. Slaughter down to a little television studio ring in Connecticut to put the cobra clutch on Salvatore Bellomo and the next I was tuned in to Wrestlemania with millions of other people.

But get this - I miss what happened before those days. And this book just fuels that fire.

In those pre-Hulkamania days, wrestling was local. We had the northeast, Stamford, Connecticut, based territory, which was, incidentally, the old WWF. We also received broadcasts from Dallas, Texas, but the worlds were one hundred percent separate. There was no way in hell that Kerry Von Erich would ever wrestle "Superfly" Jimmy Snuka. No way, no how, never, ever. Neither organization admitted the other existed, at least not on the air. In those days, pre-cable, pre-internet, you could do that. And so, in that way, Montreal was a territory unto itself.

It was a beautiful thing. You could build a storyline without having to rely on facts. A wrestler could come in from the outside and start fresh, or with a backstory of having terrorized some other part of the world, and barely anybody would care to check; you suspended your disbelief, whether you thought it was all real or not. Wrestlers changed names, gimmicks, gear and nobody ran reports to expose who they were in former lives.

But the amazing thing about the wrestling world is its transitory nature. Wrestlers did move, from territory to territory as storylines or drawing power ran out. And because so many of them had long careers, coming in and out of "retirement" into their 70s, for some, they bumped into each other all over the continent and the globe. As such, any singular territory was a crossing ground. Montreal was such a place. The best wrestlers in the world moved through, or stayed permanently: Andre the Giant, Abdullah the Butcher, Hulk Hogan and more.

Montreal, too, was a proving ground. Many of the world's best known wrestlers of the '50s through the '80s were born and bred in the area, men like the Vachons, the Martels and the Rougeaus. This book shows how they started local, made their marks elsewhere and returned to continue the long legacy of professional wrestling in the province of Quebec. In short, while this book is about wrestling in Montreal, it is full of familiar names. If you watched the WWF in the late 1970s, you will now get the rest of the story of who Dino Bravo was before he headed south for Connecticut, and learn that Rick Martel had a brother who wrestled, too. Moreover, you will learn that the Rougeaus, who we in the '80s knew as Jacques and Raymond, were, and are, just one generation of Montreal's dynastic wrestling family.

Wrestling has more or less come and gone for Montreal. Its heyday is definitely over, though there are still points of pride, like Kevin Steen, now known as Kevin Owens, the current WWE Intercontinental champion, born in Saint-Jean-sur Richelieu, and there will always be the start-up indy organization that can never compete with the WWE. But it has a glorious past, one that I miss, even though I wasn't there.

The authors bring the book forward through time and fill each chapter with mini biographies of the many wrestlers, Quebec-born and non-Quebecers, who made the scene great. There are comical moments, like when the Chicago area promoters first get a glimpse of Jean Ferre, and immediately change his name. "In Montreal you're calling him Giant Fairy?" And so, Andre the Giant was reborn. The format lends itself to repetition of information, but it's worth it once one is engrossed. It reinforces the melting pot history of the territory, and of professional wrestling in general.

Posted by John Galluzzo at 11:55 AM No comments: