Andy Warhol was a Hoarder by Claudia Kalb 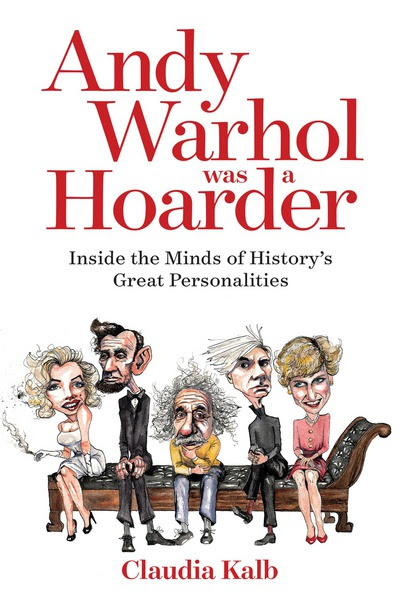 Why I Read It: Grabbed from the Amazon Vine program.

Summary: An exercise in historical diagnoses of some of the world's greatest minds.

My Thoughts: The author lets us know right off the bat that there is nothing binding in what she says. Her musings are not true diagnoses. We have to accept it, that everything in the book is conjecture, retroactive dabbling.

So let's have fun with it.

There are certain famous figures at whom we look back - Howard Hughes, for instance - who we know had their issues. And then, there are others, like, say, Abraham Lincoln. Sure, he looked morose, but then he was President at the most trying time in American history, when war raged across its landscape. I think you or I might be pretty stressed out, too. But who knew that long before he took the oath of office he was suicidal?

Who knew that Dostoevsky was a gambling addict?

This book is full of such juicy tidbits, and really, that's a lot of what this book is about. It's dead celebrity gawking, with the added twist that we're looking inside their heads. The celebrity bit gives the book its power; if this was a tome about twelve Joe Schmoes, we wouldn't care nearly as much. So, we look at George Gershwin, and we think about Porgy and Bess and An American in Paris (for reference, look up 1990s United Airlines commercials and listen to the background music). But did anybody in his time consider him to "be ADHD"? The signs are all there, today, as we look back. And was Einstein on the spectrum? Boy, it sure looks like it. We always have just taken him as brilliant, quirky, but not a candidate for autism or Asperger's. Yet, try to talk your way out of it after reading this book.

It's all here, from Frank Lloyd Wright's narcissism to Betty Ford's alcoholism. The question is raised about the connection between fame and extreme behavior. Can you be a superstar in any field without a little bit of, well, something? Usually, when I read a book like this one, I start to look in the mirror and tremble just a little bit. But not this one. Nope, these people are way too far out there.

Guess I'm not headed toward a life of fame. My mother will never believe it.
Posted by John Galluzzo at 8:26 PM No comments: