Tales from the Dugout by Mike Shannon 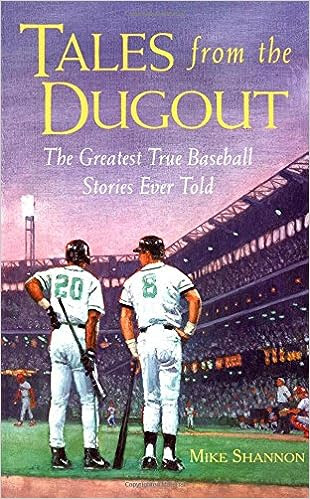 Why I Read It: I'm a Krank from way back, and this was a gift from my friend Tom from Texas.

Summary: A collection of baseball anecdotes, a little heavy on the Cincinnati side, gathered in the 1990s.

My Thoughts: Mike Shannon wanted to do a book of baseball anecdotes, but he wanted to make sure that he gathered tales that had not been told before. Baseball is a wonderful thing in that sense. It has such ridiculous depth that it is possible to turn over new stones every year and find such stories.

And the author did well. It was only on page 89 that I realized I had heard one story before, as well read as I am on the history of the sport and its characters.

These books generally age well. Baseball will always be a game of balls and sticks and gloves, of 90 feet between the bases, of short right field porches and hot shots down the third base line. The bones will always be there. It's the personalities that come and go, that fill the uniforms and the positions and lineup cards and bullpens that will change. So, even though time-stamped - for instance, when Shannon mentions that Ken Singleton is "currently" the radio announcer for the Montreal Expos - these books can proudly go onto the baseball bookshelf, despite the fact they occasionally make us stick our heads in the air and look at the calendar to check what year we're actually in.

The stories are wonderful, arranged alphabetically by subject. The one thing the book is missing is a postscript, or some other way of wrapping up the collection. In a way, it ends with triumph, but only because of its alphabetical arrangement. In the last few words, Anthony Young is carried away on the shoulders of teammates after breaking his major league record losing streak.

There was plenty in this book that I had never read before. It's the kind of book that you like to put on a shelf, knowing you may never read it all the way through again, but makes you smile when you see the spine, as you're reminded of how much you loved the book, and how much you love the game.
Posted by John Galluzzo at 6:39 AM No comments:

For Cause & Comrades by James McPherson

Why I Read It: A Civil War topic with which I've always been fascinated.

Summary: A deep examination of the reasons of why northern and southern soldiers alike fought in the Civil War,

My Thoughts: The author, a talented Civil War historian, dove into this subject with vigor and determination, much like the men of whom he wrote approached the war they fought over a century and a half ago. His tally was somewhere between 25,000 and 30,000 letters read, from all the states that existed at the time, plenty of occupations, different levels of social class.

I approached the book with some preconceived ideas. To me, the main reason men stood shoulder-to-shoulder and fired their guns at armies doing the same a few dozen yards away was the fact that most units were formed from hometowns. If you skedaddled, news beat you home, and you couldn't go home. And that notion was validated by McPherson's research. It was a factor. But it was only one.

Men signed up at the beginning of the war for different reasons than they reenlisted for three years later. At the beginning there was a cause, and though they were different on either side of the lines, causes were equally as powerful whether you wore blue or gray. Plenty of other factors
- ideology, religion, patriotism, etc. - all came into play, as did loyalty to one's comrades. Many men couldn't pull themselves away from their friends, couldn't fathom leaving them at the front and returning home. Some fought for the people at home. Some fought because they were more scared of their own officers than they were of the enemy. Northerners fought to hold together what the Revolution had wrought; southerners fought against the tyrannical rule of the North, to maintain their rights as given to them by the Declaration of Independence. It was all in the interpretation.

As the war moved on, reasons changed. Slavery became an issue, where before it was masked under states' rights. Politics heated up in 1864 with the presidential election, and the North feared a loss of professionalism as original enlistments ran out and the idea of bounty men filling the ranks permeated. Why did men fight? It depended on the year, the occupation, the personal conviction.

What this book really asks, if you read deeply enough, is why would you have fought (or would you fight today, and why)? Do we carry the same nobility of spirit as we believe they did, and as they believe their American Revolution forbears did?

It's been almost 80 years since manpower was needed in a war to the extent that the Civil War claimed it. I wonder how I would have reacted had my name been called.
Posted by John Galluzzo at 8:17 PM No comments: