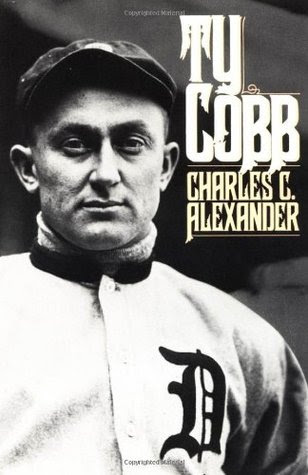 Why I Read It: Baseball has been my passion since I was a very small boy. Ty Cobb was a name I grew up with in my head, but I never really knew who he was.

My Thoughts: Ty Cobb was disliked, and I think that's where I now stand on him after reading this biography. Other people may go much further, to defining him as despicable or hated. I don't think I want to go that far.

Cobb suffered from a ferocious drive that fueled a hatred for the people around him, sometimes even his own teammates. But it was, unfortunately, what ultimately made him so successful on the baseball diamond. He always had to be better than the other guy, and felt he had to constantly prove that he was through his actions. It was him against the world, and he was nasty about it.

He played on the cusp of baseball eras, the Cobbian and the Ruthian. His was a game of bunts and steals and gamesmanship. Ruth's was of swinging for the fences. Stolen bases came back late in the 20th century, and now we live in a sort of blended age (steroids jerked us back to the Babe's game; we're now settling back toward the middle). He hated everything about the new game, and went to his grave thinking that players who played prior to 1920 were the game's all-time greats.

Had he not shown his cutthroat behavior before he made the majors, we might have cut him some slack for what happened on the eve of his coming of age. His mother blew away his father with a shotgun in what was termed an accident. Cobb had fought his whole youth for his father's acceptance, and was about to prove to him once and for all that baseball had been a wise choice, and his dad was taken away in a gruesome, horrifying scene. Naturally, that stayed with Cobb his whole life.

Cobb died a lonely, angry man, leaning toward repentance at the very end, wondering if he'd made the right choices along the way. The author brings out the best and worst of Cobb, and the book sadly tilts toward the latter, but the facts are the facts. Ty Cobb was not a nice man. He did incredible things on the baseball field, and the records books will always tell us so. He became the first independently wealthy star athlete, and he did much to help those around him with his money. I just wish he had seen the error of his ways long before he did, and could have died a happier man.
Posted by John Galluzzo at 5:01 PM No comments:

Birds in the Bush by Bradford Torrey


Why I read it: I lived, for a short time, a stone's throw from the Bradford Torrey Bird Sanctuary in Weymouth, Massachusetts.

Summary: A series of short essays on birdlife around New England in the 1880s.

My Thoughts: Bradford Torrey had that gentlemanly birder way about him, always excusing himself for intruding on the lives of the birds he was seeking. But that was the way it was in the 19th century. If you weren't shooting them and building up huge piles of feathers and bones, you were meandering about gathering behavioral data, on the cutting edge of ornithology (one might say we're still there today; we have so much to learn!).

For those folks who have never read a 19th century birding book, start with the oldest bird ID guide you can find. Eastern Towhees weren't towhees, they were "chewinks." Yellow Warblers weren't warblers, they were Summer Yellow Birds. The names alone add a lyrical bent to the storytelling, sometimes reminding us of the evolution in nomenclature we take for granted.

And, if this is your first foray into Victorian birding in the Boston area, know, too, that not all is the same. Torrey talks of flocks of Fox-colored Sparrows; a single bird spotted today will make your winter. He talks of the rarity of Northern Cardinals, and he was right. They arrived, en masse, as even winterers decades later. And he laments the arrival and overwhelming advance of House Sparrows. We lament it today as well, but he was there to see the transformation, the loss of the cavity nesters, the movement of the sparrows (at that point they were still classified as sparrows, eventually to be recognized as weaver finches, though retaining the name) from the cities and into the suburbs and countryside.

Torrey moves out across New England, to Vermont and New Hampshire, in the days when to do so meant taking a carriage to a train to a - or, the - hotel in a given area. In what has to remain one of the most interesting birding experiences of all time, Torrey rode on a slow-moving flatbed railroad car through the White Mountains' Franconia Notch while sitting on a freshly-made coffin being transported to a - the - hotel for immediate use. Quite frankly, if given the opportunity, I would have done the same thing.

One interesting sidelight to the book is the direct parallels to today. Torrey spends several paragraphs detailing the life of the hunter, how he wantonly kills the birds (as it was in those days) just for sport, and then compares it to his own hobby. Why, he says, am I labeled as the odd one, for just looking at them? Birders still live by this stigma today in America. (Note: Believe me, individual birders give the world plenty of reasons to think they're all nuts, but in truth, they're not).

Torrey's voice is one that is lost to time, but should be right there with Thoreau (whom he championed) and Muir as the great describers of the American wilderness in their days. He was a pen pal of the Isles of Shoals' Celia Thaxter, too, deeply tied into the corps of writers defining New England in the late nineteenth century.
Posted by John Galluzzo at 11:50 AM No comments: