The Lost Hero of Cape Cod by Vincent Miles 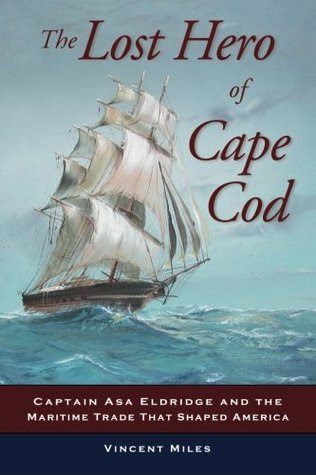 Why I Read It: The author requested a review for Sea History magazine.

Summary: The life and times of Asa Eldridge of Yarmouth Port, Massachusetts, a sea captain who did it all.

My Thoughts: The author contends that the sea captains who broke transatlantic speed records during the middle of the 1800s are an overlooked class of American heroes, and he is absolutely right.

There is a lot to consider when examining the era. Transatlantic packets had been operating for a long time, and would linger for years after major technological changes in the shipbuilding industry came along that marginalized their usage. The British were ahead of the U.S. as far as steam technology was concerned, but the Americans had better sailing ship designs. And so the race was on, for many reasons: the mail, news and passenger delivery, hidden military agendas. The two countries had been at war twice within modern memory, so it only made sense to keep the need to cross the ocean quickly in warships in the back of one's mind.

Eldridge, amazingly, took the helm of transatlantic packets, transatlantic steamers and clipper ships, playing a major role in the dropping of the crossing time from a month to just over nine days. We can't imagine it now, but consider an America that had to wait for a month to get news from Europe. Then imagine what it must have been like to have that shrunk down to about a week. It must have seemed like the world was spinning faster than anyone ever imagined it could.

The author does a magnificent job of pulling together the scant primary source material about Eldridge himself - one letter to a newspaper, a few official documents, etc. - and weaving them into the story of the era. We know, for the most part, what ships he captained (he had seagoing brothers as well, and sometimes they got confused in the press). Throw in the 1849 San Francisco gold rush, the Australian gold rush, the idea of cutting a canal through Central America, and you have an engaging saga about the seas in the middle of the nineteenth century. Still, there remains an air of mystery around Asa Eldridge, which, unfortunately, continues through his death at sea.

We've made heroes of much lesser Americans. Asa Eldridge and his contemporaries deserve far more recognition for the growth of early America than they currently receive.
Posted by John Galluzzo at 5:29 AM No comments: