Andy and Don: The Making of a Friendship and a Classic American TV Show by Daniel de Vise Why I Read It: Both actors were big - in re-runs - during my childhood.

Summary: A dual biography of Don Knotts and Andy Griffith, highlighting their years in Mayberry.

My Thoughts: Don Knotts was Mr. Furley to me, first, and then he was Mr. Limpet. Boston's two main UHF local television stations - when stations truly were local - in the late '70s and early '80s ran nightly movies. To keep perspectives fresh, they had theme weeks, like Don Knotts Week. If allowed to stay up past the 7 o'clock hour, we could catch The Incredible Mr. Limpet, The Ghost and Mr. Chicken, or perhaps The Shakiest Gun in the West. Knotts' bugged-out eyes were all it took to get us rolling on the floor laughing as kids.

I didn't appreciate Andy Griffith 'til much later. It took the coming of the superstation, TBS, to bring the Andy Griffith Show into my home. I knew the theme song - everybody did - but had never really watched the show. Now, TV Land has brought it into my living room every late afternoon. Let's just say that it matched the hype.

Let's face it; it's old. It's black-and-white in the early years. And when it debuted, it told of a simpler time. That was in the mid-60s. For folks then, it was nostalgic. It was about friendship, honor, small-town life and the power of community. Today, folks who lived in the days it represented - people who longed for a return to those days - are almost gone. When I watch the show, I get nostalgic, but it's more like time travel for me, as it's definitely not reminiscence.

The story goes that Don and Andy met each other on Broadway in the 1950s, two southern boys with shared memories from different childhoods. Andy took the lead role in No Time for Sergeants, with Don getting a supporting role (Don having served in the Pacific in World War II). Later, when Andy lands his role as the sheriff of Mayberry - technically a spinoff from Danny Thomas' Make Room for Daddy - Don, freshly out of work, calls Andy and asks if his sheriff needs a deputy.

One wonders how the trajectories of both lives might have been different had that not happened.

Don clearly becomes the star of the show, with the Emmy's to prove it. Andy becomes his straight man, and when Don chooses to leave to pursue a movie career, Andy forges on, but the show is not the same. Neither is Andy's career. Don is a breakout star, riding his fame into the 1970s. Andy motors along from project to project, but never gets over the top again until Matlock comes along. Even then, who does he invite along to play a supporting character? Yup, Andy Taylor and Barney Fife are reunited. Had Andy never invited Don to Mayberry, would Don Knotts have become the star we all lovingly remember today? Would Andy Taylor have evolved differently, and Andy Griffith become the bigger star? Did Andy put his own career unwittingly on hold to boost that of Don?

The friendship was beautiful and lasted 'til the sad end, when Andy said goodbye to Don. On screen they were magic together, and that magic carried into their personal lives. They were so different, in stature, in voice, in comedic style, but they understood each other because they grew up together, in different places. They understood the value of sitting on the porch on a summer night, and the humor, as the author says, of old ladies fretting about their entries for the county fair pickle contest.

The author weaves together two biographies and carries us through both the public and private lives of both men, telling us more than we ever thought we would know about Andy's temper, Don's nerves, their six wives, their relationships with their own parents and kids and more. Through it all we feel a slight bit of shock - would Barney Fife really do something like that? - when we read about transgressions, or dirty jokes, unable to pull ourselves away from Andy Taylor and his deputy, as we have come to know and love Andy Griffith and Don Knotts.

Would you go back if you could? Would you walk the streets of Mayberry, stop to say hi to Opie on the way to Goober or Gomer's shop to check on your car before visiting Floyd's barber shop? Would you sit on the porch with Thelma Lou and Aunt Bee and let the time tick by, if just for a few hours? More importantly, could you do it, with the fast-paced life you lead today?

Mayberry, and Don, and Andy and Aunt Bee and all the rest, still have lessons to teach us today, a half century later.
Posted by John Galluzzo at 3:30 PM No comments:

The Day the World Came to Town: 9/11 in Gander, Newfoundland by Jim DeFede 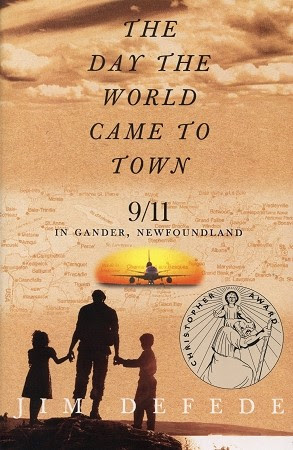 Why I Read It: Re-read it, actually. A friend had lent it to me about a decade ago, I loved it then, and recently realized I didn't have my own copy.

Summary: Planes heading across the Atlantic on 9/11 were ordered down, and to avoid U.S. airspace. Many landed in Gander, a small Newfie town with a regional airport that was suddenly overwhelmed by thousands of confused and even terrified people.

My Thoughts: It's amazing what happens when money is no longer an issue, when life is placed in front of all else.

Gander, population 9,651 at the time of the terrorist attacks on the World Trade Center and Pentagon on September 11, 2001, welcomed 42 planes (38 civilian and 4 military) that day, really through no choice of their own. The planes brought an extra 6,600 people to town, people who needed to be fed, housed - indefinitely - and entertained. The town opened its schools, its church, its fraternal organization halls, every place the locals could think up, including their own homes.

They lined up at these places with sheets and blankets pulled right from their own beds, with home-cooked meals and with toys for the children on the flights. They gave, and they gave, and they gave, and they smiled as they did so. The "plane people" were worried and disconnected from loved ones, anxious to make phone calls. And they came from everywhere across Europe and North America. Stores opened up their doors and delivered anything and everything the plane people needed, at no charge.

9/11 had a strange effect on all of us. There was a certain survivor mentality among many of us, though most of us were never in danger. We pulled together and bonded in ways we definitely haven't since. We gave whatever we had - money for the firefighters' funds in New York City; volunteer time in so many ways; food and water; and so much more - and never considered the aftereffects, like a lightened bank account. It was just the right thing to do.

And so it was in Gander. They consider it the "Newfie way" to extend a hand to a stranger in town in need. While many of us were wondering how we could help, removed from the scenes of the attacks, distant from the people who died as a result, the people of Gander were helping a community almost the size of their own, squeezing them into every possible space in town.

The author regales us with the details, the names, the faces, the remarkable frozen-in-time situations that made each individual's story unique. He reminds us that in the face of evil, when the world is at its darkest, hope and love can still outshine everything else.
Posted by John Galluzzo at 10:21 AM 2 comments: