No Time for Sergeants by Mac Hyman 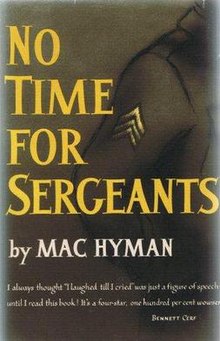 Why I Read It: Totally an outgrowth of reading a dual biography of Don Knotts and Andy Griffith (both of whom are in the movie version of the story).

Summary: Will Stockdale is drafted, completely unsuited for life in the military, and unwittingly torments his superior officers.

My Thoughts: While I loved this book to pieces, I wondered as I was reading it what it would have been like to read it when it was released.

Millions of men and women had shared the military experience in World War II, and for decades to come would also share the humor that grew out of its commonly identified moments of ridiculousness. They would laugh about KP, about latrine duties, bad food and much more. As an historian, I get it, and I laugh, But I wonder what it would have been like to have been in the know, in the moment.

It's all in this book, wrapped around the story of a country bumpkin drafted into the Air Force against his father's will, as his father, even more of a bumpkin, can't understand why a recruiter feels he has the right to come onto his land and order his son around. The son, Will Stockdale, is logical and level-headed, if under-educated. He thinks through every situation, oftentimes in his naivete exposing the silliness of aspects of military life. In doing so, he drives the people around him crazy, forever happily advancing through his life in a sort of fog, unaware of his effects on people. His superhuman strength and his ability to intake huge amounts of alcohol seemingly without effect make him that much harder to bring down.

Stockdale befriends Ben Whitledge, a young man descended from a long line of military men, including one who served under Stonewall Jackson in the Civil War. Whitledge believes he is destined to face glory as an infantryman, and is depressed when he finds out that he is heading to the Air Force.

Will and Ben are separated for a while, but eventually reunite for the book's crescendo, a comical series of events that ends with great foreboding, but leaves the reader with an informed fatalistic smile. Will and Ben made it through some tough scrapes; they'll make it through this one.

One topic I'd like to read about further is this book's effect on the future interpretation of World War II and the era. For instance, Will, as latrine orderly, rigs the seats to salute during inspection. Two decades later Major Frank Burns does the same on M*A*S*H. I'll bet there are plenty more such influences.
Posted by John Galluzzo at 4:23 AM No comments: