Italy: A History by Vincent Cronin 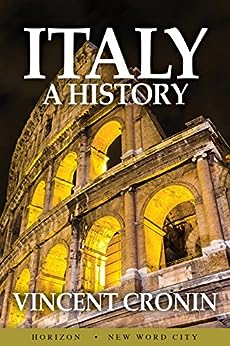 Why I Read It: I'm Italian.

Summary: A thorough, straightforward history of the two millennia that forged the current Italian nation.

My Thoughts: It's good to know that my professors as UMASS were correct.

I had the chance to study Italian history under two professors who were, as we like to say, "fresh off the boat." They had no doubt been here in the States for a long time, but like my great-grandmother and others in my extended family, they retained heavy accents and occasionally threw in an Italian word where it fit better than anything English had to offer. Hearing them speak about their native history was inspiring, even if the Italian people have struggled to make their way through the centuries. I think that was the biggest takeaway from this book for me, that Italian history is not a simple path, and for huge chunks of time it's not even Italian.

It's glorious at the start, if we can confidently connect the dots between ancient Rome and modern Rome. Like much of European history it falls silent after the fall of the Roman Empire, and wide chasms of time pass without any, or much, documentation. But when Italy arises again, in its many nation states, it becomes the cultural center of Europe, from Michelangelo to Galileo and beyond. Napoleon - who was Italian in all but official nationality (born on an island that became French just a few years before his birth, he spoke Italian and had an Italian surname, Buonaparte) - forged the idea of unity picked up later by Mazzini and Garibaldi. Since that time, there has been a single Italy, even if it has struggled for national identity.

If there was one fact that I learned in this book that I will remember for the rest of my life it's that my name, or one very close to it, once sparked fear in the hearts of people across Italy. Gian Galeazzo (as compared to John Galluzzo) was the first Duke of Milan in the late 14th century, just before the Renaissance, and dreamed of unifying Italy. He led numerous military campaigns toward that end, and is credited with setting up the first modern bureaucracy. It all came to naught, as he died of a fever before he could finish off his plan.

This book, in my case, was refreshing, both in the sense of being pleasant, and also in reaffirming the value of my college education.
Posted by John Galluzzo at 6:58 AM No comments:

You Gotta Have Wa by Robert Whiting Why I Read It: Always up for a baseball book.


Summary: The experiences of American baseball players playing in Japan (as of the late 1980s).

My Thoughts: The cultural divide between the United States and Japan is enormous, and I applaud those folks who travel either way to forge a new life.

For baseball players - keep in mind this book was written in the late 1980s - the experience has been, simply put, testing. The Japanese at that time had a deeply strong belief that they were all middle class, but that no matter what the circumstances, they were better people than any gaijin, or foreigner, treading on their soil.

Their sacred traditions of respect and "face," as well as the bushido code, the realm of the ancient samurai, all play roles in the Japanese baseball world. They train until they can barely move, throw fastballs until their arms no longer work, even through injury, and run antiquated stamina drills because history mandates that they do so. Managers and owners make decisions based on how they look to other people rather than on sound baseball strategy. Pitchers will intentionally walk American batters numerous times to avoid the shame of giving up home runs, especially when a gaijin is chasing a record held by a Japanese star, and even when the bases are already full.

And then there's wa. The Japanese believe in team harmony, whole American teams have won World Series riding "25 players in 25 cabs." Anything that disrupts wa can be seen as a hindrance on the pathway to a championship. Many times that disruption has been an American in a Japanese uniform, living as an individual, as Americans do.

Some Americans have fared well under these circumstances, others have completely fizzled out. Some have challenged those sacred records (like Saduhara Oh's all-time home run title; Oh, by the way, was half-Chinese, and never fully respected by the Japanese). They've become the greatest American baseball players of whom we've barely heard.

Robert Whiting brings us through everything from the American perspective to the Japanese. He tells us what the umpires think, how the managers - both Japanese and Americans heading up Japanese teams - deal with the owners, and gives us a straight history of the Japanese game from the start of the Meiji Restoration in the middle of the 19th century to the late 1980s. Purists who follow the American game will shake their heads as they read, much like Japanese fans shake their heads at the American version.
Posted by John Galluzzo at 5:10 AM No comments: