Why I Read It: Growing up in the 1970s and '80s, before cable television the Stooges were what Sunday mornings were all about.

Summary: The biography of the one man the Stooges seemed to always be taking down, actor Vernon Dent.

My Thoughts: He just always seemed to be there. If it wasn't Emil Sitka, it was Vernon Dent.

No matter the outcome of their shorts, whether they ended up triumphing over the Nazis or breaking rocks on a pile in Leavenworth, the Three Stooges always had an authority figure to battle. Veteran actor Vernon Dent had that role plugged to a "T."

Dent was certainly a familiar face to the boys, no matter what face he donned for that particular film. Sadly, to most of us, the first two decades of his work has been otherwise elusive. Growing up when I did I did not have access to the many hours of silent film comedies he made with Harry Langdon and others. I had no idea who he really was, other than the big guy who always wanted to bonk Moe, Larry and Curly's head's together.

And so, as biographies go, I learned a whole lot more about the man, and inwardly wept with his passing. I'm a sucker that way. Even though he died long before I was born, and his death was already an accepted fait accompli, it still saddened me for the journey to come to an end.

Dent was from San Jose, started out in music halls (his musical talents would be displayed once in a while in his films) and moved into silent films, a "Fatty" Arbuckle-style comedian, or Oliver Hardy before there was an Oliver Hardy. He was a hard worker, yet retiring. Had he not gone into film, he would have been at ease as a gentleman farmer. He was noted, as his grave marker said, as a "gentle presence." He died just a few weeks before John F. Kennedy, in November, 1963.

The author has compiled, with the help of colleagues, a 50-page filmography, showing the deep extent to which he worked. You may have last seen him as Santa Claus on I Love Lucy (1951), or in his last Three Stooges 2-reeler, Guns A-Poppin' (1957, and it was a "Joe" if you're asking). Or, you may have seen him this past New Year's Eve, during a Stooges marathon. Maybe you'll see him this Sunday morning.

The author has done a wonderful job of combing the early archives of San Jose's newsprint to find the stories behind not only Vernon, but the generations who came before him, exposing the sorrows that no doubt impacted his life at a young age. We get the story from beginning to end, knowing, full well, that having been on so many sets there had to be much more of import that went on in his life. He was in Hollywood during the Hollywood heyday, appearing in features like Mr. Smith Goes to Washington with Jimmy Stewart, and others. Had Vernon Dent had the inclination to tell his own story, we might know even more.

This biography shares with us the professionalism, the creativity and ultimately the flaws of the man who gave the Stooges so much trouble on screen, and who helped to propel them to entertainment immortality.
Posted by John Galluzzo at 8:44 AM No comments: 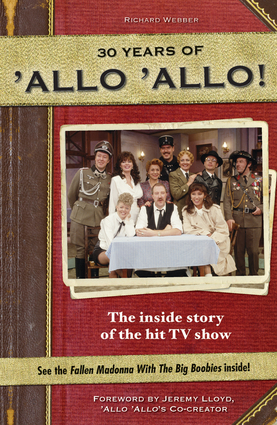 Why I Read It: Binge-watched the show on Netflix and fell in love.

Summary: Three decades on, where are the cast members now? What's the show's legacy?

My Thoughts: When I was a kid, it was M*A*S*H and the Three Stooges. Later it was Seinfeld and Everybody Loves Raymond. I've always had a background track running in my life.

It's not that I necessarily watch every second of every show. I've always been a multi-tasker, perfectly comfortable to put on a TV show in the background as I do everything but write. I even read with the TV on. In a weird way, the cast members become members of my family. They're the comforting background noise to my life as I go about my work.

And so it came to be with 'Allo 'Allo! Except this time it was a bit different. While I've watched the others on TV, I binged this show on my Kindle on the elliptical. Two episodes per day got me easily through each day's workout. I focused more strongly on the show than I typically do.

Why did I choose it? A few reasons. First, I love British comedy, from Monty Python's Flying Circus, Fawlty Towers, and Are You Being Served? to One Foot in the Grave and even listening to the audio versions of Dad's Army, All Gas and Gaiters and more. They go places American shows just won't. Second, the Jeremy Lloyd/David Croft combination is always worth a shot. As co-creators and writers they just had the magic touch. Third, the setting was fantastic to me: occupied France during World War II. The familiar themes of the war played out in a French cafe frequented by Germans under whose noses escaping British airmen hid, sometimes in plain sight.

But that's the TV show. As for the book, it's wonderful, exactly the type of follow-up one wishes for when reaching the end of a run. The author recaptures the series year-by-year giving behind-the-scenes stories told by the players themselves. We learn of the practical jokes, the special relationships the formed because of the show and the small jealousies that arose as well. Each of the lead actors is profiled, and even some of the lesser lights. It's, of course, sad to know who is no longer with us, but also very interesting to know who has done what since. Yes, IMDB can coldly tell us that, but the book lets the actors tell us the details through the words of the actors themselves.

The book becomes a reference guide to the show, one to be pulled off the shelf when the questions arise about specific episodes. When did General Von Klinkerhoffen lose his mind? When was Herr Flick hit with the poison dart? When did the Communist Resistance first appear? What was Officer Crabtree's catchphrase? It's all there.

And, thanks to digitization, so is the show. May its legacy last long into the future.
Posted by John Galluzzo at 7:41 AM No comments:

Seasons in Hell by Mike Shropshire


Why I Read It: Re-read it. Remembered it as one of the funniest baseball books I'd ever read. Decided to give it a second try two decades later.

Summary: A beat reporter remembers the Texas Rangers of 1973-1975, with (almost) no punches pulled.

My Thoughts: This book was just as fun the second time around.

Shropshire covered the Texas Rangers during a turbulent time, both for the franchise locally and the nation at large. The Rangers, recently the Washington Senators, were trying to establish themselves in a new market, and struggled out of the gate with Ted Williams and then Whitey Herzog as manager. When Billy Martin arrived, things turned around, but there was one problem: Billy Martin. On the national scene, think Watergate, Vietnam, turbulence in the Middle East and more.

Shropshire's story is semi-autobiographical, recounting how a beat reporter earned his money and his chops in those days, when newspapers still mattered. But mostly it's about the individuals on and around the team, from the players to the owners. We may not remember Bob Short or Brad Corbett for their influences on the game, but as owners they left their marks in baseball history for better or worse during their short tenures.

For me, the book is almost perfectly situated in time. I was born in 1971, and really started following the game about six years later. The names are mostly recognizable for me without having to refer to baseballreference,com or some other informational website. It made the read very smooth.

That said, a little backstory is always interesting. I knew of Fergie Jenkins, of course, but had no idea, for instance, that one spring training he picked up a hermit to help him drive from Texas to Florida so he could get some sleep on the way. I knew that the '70s were a 1960s hangover, with remnants of the free-spirited anti-authoritarian nature of the previous decade manifesting themselves in odd ways. It was a time when baseball owners were experimenting with ways to increase their gate revenues, including such harebrained schemes as "Bat Night" and "10-cent Beer Night." Having recently read a book on the Oakland A's of the same period I had some sense of this atmosphere, but Shropshire lets more of the sordid stories fly.

The story has a sad ending that deals several personal blows to Shropshire himself, leading him away from newspaper writing and the day-to-day Rangers beat. There could have been more, but Shropshire certainly gives us plenty of material to ponder and even laugh out loud about.

Sometimes it can be hard to read another fan's favorite team's books; Red Sox fans generally do not read Yankee history. But this is more about a moment in baseball time than it is about any rooting interest. It crosses a boundary into the wide, wide world of sports that existed in the 1970s.
Posted by John Galluzzo at 9:43 AM No comments:

1918: The Year of Victories by Martin Marix Evans

Why I Read It: Feeling like I should know more about the stories of World War I, now 100 years in the past.

Summary: A thoroughly military look at the action on the western front in the final year of the war.

What a horrible war. Evans's narrative follows closely the thoughts and actions of the combat officers who directed the battles that ultimately decided the First World War. The story of 1918 really hinged on the arrival of American troops. The Germans knew they were coming, made a push to claim as much land as possible before they arrived, trying to finally wear down the decimated French and British troops. But it was for naught, as the fresh supply of manpower put the Allies over the top.

As this book is primarily about tactics, it follows the evolution that ultimately leads to the resolution that men should not be seen as expendable as bullets, fired off once and discarded to make way for the next wave. Until that point, though, the losses are appalling; 16,000,000 people died during the war, of all causes. I've often wondered which one of them would have cured cancer, if given the chance to live, which one would have composed a classic concerto, and so on. What a horrible, horrible war.

It's sprinkled liberally with first-person accounts of the action, as soldiers explain what life in the trenches is like, first encounters with tanks, the sounds of bullets flying overhead and what it feels like to know that incoming shells are on their way. These tales humanize the stories of battalions, divisions, salients, and command structures that are focal points of the book.

Posted by John Galluzzo at 9:08 AM No comments: