Schulz and Peanuts: A Biography by David Michaelis 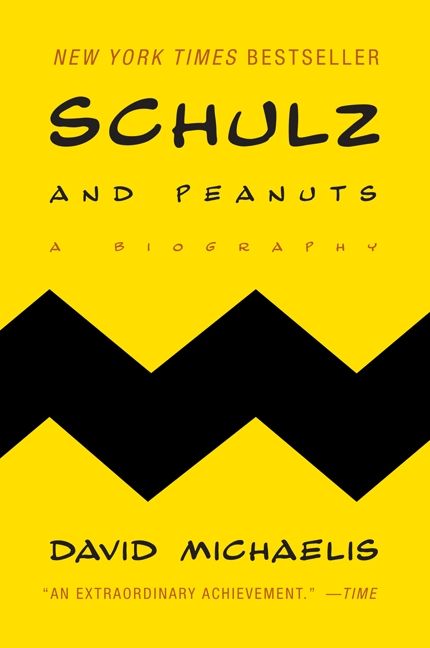 Why I Read It: Found it in a discount rack at a local independent bookstore, and couldn't believe it. Like most Americans, Peanuts has been a part of my life since my earliest days.

Summary: A biography of the master comic strip artist.

My Thoughts: I've waffled back and forth a bit since finishing this book when attempting to determine my true feelings about Charles Schulz. I think I've come to a decision.

But first, a few facts. The book is a monster, about 560 pages of nonstop inspection of the life of "Sparky" Schulz, the man we all better knew as Charles M. It takes him from his earliest days (and his family from their original immigration to America) through his death, as any good biography should. But it brings us to a level of perception we didn't know we needed to have about his life. It shows us how Schulz bared his emotions to us through his two-dimensional characters.

More than we know of Schulz's life played out in the dailies and Sunday strips. He was an amalgam of many of his main male characters. He thought the world was against him, or didn't love him, as does Charlie Brown; he was a classical music aficionado who wished he could tune out his wife, like Schroeder does with Lucy; he had his religious and philosophical side, like Linus; and he played out his heroic fantasies and desire to break free from societal constraints - to just be a bad boy - like Snoopy.

There was a little red-haired girl, in real life. Lucy had her real-life origins. Even his quieter, supposedly secret relationships played out through the strip. It became a medium through which he could communicate without real worry.

But there is, I believe, more than Michaelis discussed. Now, I'm no nickel-a-session psychiatrist, but it seems to me his loneliness in life had far more to do with his father's lack of closeness and his mother's early death (though Michaelis is correct in keying in on them). I've been around many "only children" in my own life, and notice the same constant desire for attention from them, almost to a fault. Schulz exhibited those behaviors, to me, in spades. It manifests itself in the same way that our great stand-up comedians display their insecurities. They constantly seek the reassurance of laughter to fight their own demons. Schulz, the man, was calling out for attention like a little boy. We can all debate whether or not we are better off with siblings, growing up, but can't deny that they at least have an effect on us as we age. Once we stop arguing about who pushed who and who ate the last cookie, we get to share memories that no one else ever can. With both his parents gone, and no siblings, Schulz had no real connections to his formative home life.

His "woe is me" routine got to me by the end of the book, and had me teetering on the edge a bit. I have a tendency to build up some harsh feelings toward such behaviors, for what reason I don't know. But I think spending so much time with him, through the pages of the book, gave me my own breakthrough. There's a hill we all have to climb to reach a state of self-confidence; Schulz' hill, for whatever reason, was bigger than most. With all his achievements, all his accolades, all his money, one would think there would reach a point of contentment, but it was not to be.

Whether he did it for his own selfish reasons or not, Charles Schulz brought - and brings - joy to millions upon millions of people. I don't go a day without seeing his characters, never mind his influence. My sons and I make up our Charlie Brown Thanksgiving dinner every year (toast, popcorn, pretzel sticks and jelly beans) as we watch Snoopy wrestle the lounge chair. Schulz' impact is not going away any time soon.
Posted by John Galluzzo at 7:04 AM No comments: