My Days, Happy and Otherwise by Marion Ross


Why I Read It: Come on, she was Mrs. C! I grew up with her as a constant presence on my TV as a kid.

Summary: The autobiography of a television legend.

My Thoughts: I personally picked up n the Marion Ross story in the mid-1970s, which, coincidentally, was when her biggest break hit. She had, by then, already had quite a career, so therefore it's inevitable that reading this book filled me in on details I never knew about the acting life she had led before she joined the Happy Days cast. That last statement has to be couched, though, by the fact that we no longer have to wait for biographies to come out to put the pieces of an actor's career together; if I was more of an IMDB cruiser, I would have had more of the picture.

That said, I would have had more of the picture superficially had I taken that route, but nowhere near as deep. The author is frank about her life, and that includes all facets of it. She tells us all about her family life, from growing up through marriage and divorce. She tells us everything we need to know about the road she traveled to Hollywood (when she believed she was actually on the road to Broadway). And so, when we learn about her roles in movies and television, we read about how she got them, the ins and outs of casting, of Hollywood networking and more. One of her early crowning moments comes when she is invited to a reading at the home of the Bogarts to read with Noel Coward, Lauren Bacall and Claudette Colbert.

One of the happy surprises of this book, and there are many, is the 100-page or so block of interviews with the author's Happy Days co-stars and her children. They're almost all there (Tom Bosley, Pat Morita and Al Molinaro having already passed on), with even Garry Marshall and Erin Moran sharing some of their last words for the book. Ron Howard, Henry Winkler, Anson Williams, Donny Most and more speak openly about both the show and Marion herself.

Ross' overwhelming message is "it can be done." From the time she was young she had a dream. Taking the strength of her mother's character to heart, she never gave up on that dream, forging a wonderful career for herself and instilling in her own children the same spirit.

She is correct in the notion that not all days are happy, but when you live your life like Marion Ross, they can be overwhelmingly so.
Posted by John Galluzzo at 9:05 AM No comments: 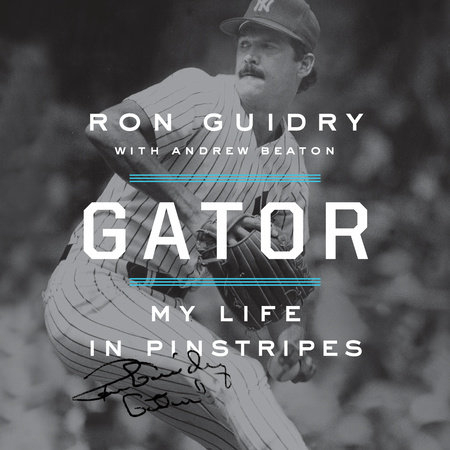 Why I Read It: Ron Guidry was one of the most dominant pitchers I ever saw play baseball.

Summary: The autobiography of one of the Yankees most legendary players.

My Thoughts: The book is obviously ghostwritten, and unfortunately not the best written work out there.

I don't feel this book told the full story of his life, but I do feel like I know him at least a little bit better than I did before I read it. He is a true Louisianan at heart, and takes a lot of pride in his heritage. I was touched by his relationship with Yogi Berra, something I knew nothing about. And I respect his distancing himself from the "burning Bronx" shenanigans in the George Steinbrenner - Billy Martin - Reggie Jackson days. The stories have been told several times about the interactions between these three and more in the late 1970s. Guidry's book doesn't dwell on the negativity, bit focuses instead on his personal baseball story.

Despite what he did to my Red Sox, I have high respect for the Gator, as any true baseball fan should. He was a standout in his time, someone who made the game much more interesting just by standing on the mound and firing that nasty fastball of his over the plate.
Posted by John Galluzzo at 7:49 AM No comments: