Indy 500 Memories by Art Garner and Marc B. Spiegel 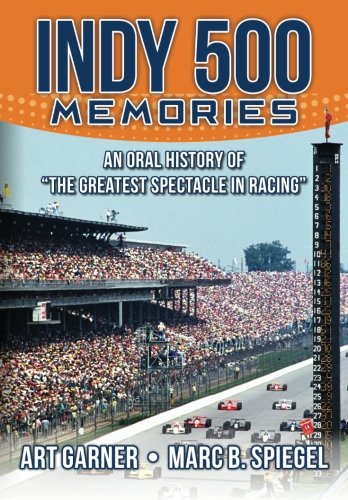 Why I Read It: Had a conference in Indianapolis, my first visit to the city; I always try to read something of local interest when I am away.

Summary: An oral history of the "Greatest Spectacle in Racing (also the subtitle).

My Thoughts: I believe it was the movie City Slickers in which the cowboy character, named Curly (and played by Jack Palance), said that the secret of life is "one thing." That's what this book is about.

But the thing about this "one thing" is that it has levels of interest for people all around the world. It's not my one thing, but I certainly recognize many of the players in the game. I don't know a damn thing about Indy car racing, but I know who A.J. Foyt, Al Unser and Rick Mears are as much as I know who Helio Castroneves, Arie Luyendyk and Emerson Fittipaldi are. That says something about the sport, and the race; even casual fans retain at least some recognition. The last Indy 500 I watched end-to-end was in 1982. I remember because Rick Mears had the pole position and I remember the TV I watched it on (he was on the pole six times, but that is the only one that fits all the criteria!).

The authors collected the memories of more than 150 people, from fans to drivers to owners to pit crew chiefs and more. Interestingly, they reiterate the same handful of items - Jim Nabors singing "Back Home Again in Indiana," the horrific 1964 crash that killed two drivers, the winning driver drinking the milk - which makes the book somewhat repetitive, but, in truth, it's what the authors asked for. What do you remember most about the Indy 500?

The authors stage the book well, with chapters on first experiences at the Indy 500, on the women who broke the gender barrier, with special attention paid to the dynastic families and superstar drivers who made the race famous. The book ends with a chapter on tragedies and rides off into the sunset with a chronological chain of triumphs, leading up to 2015.

If there's one disturbing aspect of the Indy 500 story, it's the recurring topic of  death and the nonchalance with which it was accepted in the 1960s and 1970s. One statistic, quoted in the book, said that there was a time period when one in seven drivers was expected to die in competition. One belief, also reported by one of the interviewees, stated that the World War II mentality of "we all have to go sometime" made the drivers push themselves without regard to consequences. It's difficult to accept today, the notion that a man could be killed right on front of thousands and the race would go on.

Whether the Indy 500 is your "one thing" or not is immaterial; just know that going into this book, it is the "one thing" for thousands upon thousands of Americans, and this book is their voice.
Posted by John Galluzzo at 11:16 AM No comments: