The Club by Joshua Robinson and Jonathan Clegg 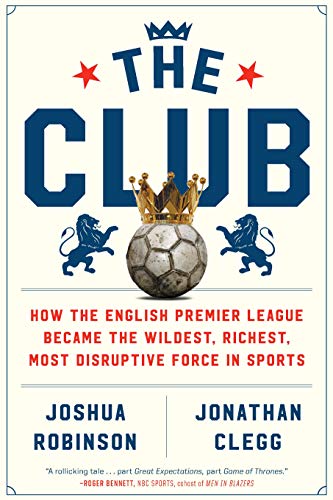 Why I Read It: The growth of the Premier League has always fascinated me, as has the business of sports.

Summary: Subtitle: "How the English Premier League Became the Wildest, Richest, Most Disruptive Force in Sports."

My Thoughts: It's amazing how greed continues to rule the world.

I should partially take that back. There is greed, and then there is ambition. Yes, it was greed that started the whole league off, the notion that the top teams in English football wanted a larger slice of the pie, but then there was the ambition of wanting to see how big the sport could get. That's capitalism at its finest. Living in a capitalist, democratic society, I can't say I argue with that. Business owners don't incorporate with the idea of settling into a little niche and struggling to make a little profit after a lot of hard work; why should soccer teams and leagues?

And so the league took off in the 1990s, borrowing a bit from the National Football League, which had just gone through its own period of phenomenal growth. It - the owners of the 20 clubs, collectively - invested in new stadiums and, most notably, broadcast rights, domestic, at first, and then abroad. It went from hooliganism and the working class to suits and champagne, from stadiums without proper bathrooms to palaces akin to the NFL's landmark buildings. With the heavy in-pouring of revenue came a steady stream of foreign-born players, an instant way for fans afar to see themselves and their identities reflected in soccer clubs playing thousands of miles away. Suddenly, Koreans, Uruguayans, Croats and more wanted to wear the colors of West Ham, of Liverpool, of Man City. International ownership became the norm, with absentee ownership being a common factor for fan bases no longer knowing who to direct their ire toward.

But, as Robinson and Clegg explain, once the model was out, and the money evened out, things began to change. For a player from abroad, if the money is the same, why play in the rain in England when one could just as easily play in the perpetual sunshine of Barcelona? Once the Premier League went international, it took on international problems and competition.

And so, 25 tremendously successful years in, the top six teams wanted out. They wanted a larger slice of the pie, as greed raised its ugly head again.

The authors raise numerous interesting points along the way, but one almost throw-away line caught my attention. It's well-known that the game is universal, played literally around the globe. The line came in comparison to the NFL, which, while wildly popular in the U.S., struggles to expand around the world in actual play. It's the damned rulebook. While soccer is watched and understood in dozens of languages, the ever-changing nature of the NFL product, with its ridiculous, catch/not a catch, fumble/not a fumble, tackle/roughing the passer confusion, makes it not worth the while for fans around the world to try to get invested in. If I was starting from scratch in my 20s or 30s, I wouldn't bother either.

Then again, Americans may never feel comfortable with some facets of English football life, like relegation. The bottom three teams in the top league travel downward for the next season, while the top three in the second tier move up. Americans could never grasp this concept, as American sports associations are constructed with farm systems rather than independently owned teams free to float upward or downwards; the big club has rights to all players in its system. The Pawtucket Red Sox could never move up to the major leagues, because they are a dedicated International League, AAA baseball team. We don't mind watching the drama of relegation from afar, because, after all, Man United is not our team. If it was our Red Sox, or Seahawks, or Knicks, that would be a different story.

Of course, this is a story that has simply hit pause, and has not ended. It will be interesting to see where the Premier League stands in another 25 years.
Posted by John Galluzzo at 8:14 AM 4 comments: