Why I Read It: I studied British history in college, lo these many years ago.

Summary: A "Casemate Short History" (the name of the series) of knights, predominantly British.

My Thoughts: It was fun to revisit this topic with a specific focus and a timeline.

I had never thought about when knights came to be. Obviously it was a gradual process, and obviously during the Middle Ages. Other than that, I would never have put a date on it. The authors choose the Battle of Hastings in 1066 as the moment of arrival.

That, I suppose, is certainly up for interpretation and debate. The ending of the era, on the other hand, is more obvious. If we consider armor and heraldry and specific modes of combat to define the knight's era, then it's when those things go away or become outdated that we can consider the age over. When warfare moved from swords and pikes and lances to artillery and firearms, armor became less useful. When wars were fought on grander scales with massive armies that required drilling and uniformity, the individual knight, with his ego and desire to do things his own way, became less useful. The authors do a great job of outlining this change.

They also seem to have fun tracing the history of the knight in combat, and this book becomes primarily a military history, mostly of British kings and their wars (the Crusades, the Hundred Years' War, the Wars of the Roses). They do profile a few knights from other countries and dabble in the literary works that have shaped our view of the knight through time, like Ivanhoe and the tales of King Arthur and his Knights of the Round Table. But, for the most part, it's a story of Richard the Lionheart, Edward Longshanks, Henry V and the others in the English line.

The subtitle is "Chivalry and Violence," and it delivers.

Born a Crime by Trevor Noah

Why I Read It: Saw it on the displays at bookstores too many times; had to grab it and dive in.

My Thoughts: This book has so many layers to it.

We can start with race. We tend to think in America of race being, literally, black and white. Apartheid confused the issue with, for instance, Asians being placed in different classifications based on what benefit their nations brought to the government (e.g., as trade partners). With the many race-based rules and laws in place, it became utterly confusing; a Japanese guy could do something that a Chinese guy would be arrested for, but the Japanese guy would be exempt from punishment. Throw in the way that all the native groups looked at each other, and you have a mess.

Now try being a light-skinned black child from a mixed conception, and no marriage.

Then, throw in the fact that the institutionalized racism that marked the era came to an end during your childhood. Theoretically, things should even out, right? But we know that such things don't happen over night (ex. United States). Add poverty.

Noah's childhood was one of not belonging anywhere, and finally having to find his way however he could. He had trouble making friends, and in staying out of trouble. And he had a hyper-religious mom, who loved him to pieces, but let him wave in the wind when he was caught red-handed doing something wrong. She wanted the best for him, but knew there were lessons he had to learn himself if he was truly going to succeed in the world.

He uses a startling literary device at the beginning of the book, giving away a portion of the ending that makes the reader's head spin with anticipation. Ultimately, this book is about the many relationships that shaped Noah's life, but predominantly the one he shared with his mother, complicated, but always grounded deeply in love.

Posted by John Galluzzo at 11:06 AM No comments: 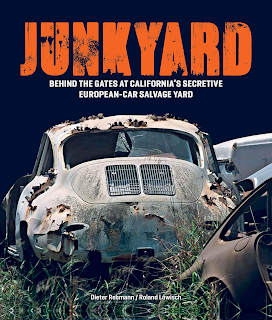 Why I Read It: Impulse grab off Amazon Vine.

Summary: A pictorial catalog of the many hidden treasures in a secretive Southern California European car graveyard.

My Thoughts: There's a whole backstory about the owner of the junkyard, a transplanted German named Rude Klein who found his way to the Los Angeles area via Canada. He obviously had the collector gene, maybe even that of the hoarder. Or perhaps he was a genius. It's hard to tell on which side of that line he stood. Yet, he was able to selectively monetize his odd collection, so perhaps it's the latter.

What he did was find broken down, beaten up European cars of all kinds - German, Italian, English, etc. - and gather them here under the shade of barns and even out in the open exposed to the the dry, hot sunshine of the arid southwest, some piled on top of each other. He kept it a secret, but eventually word leaked out, and collectors seeking parts begged and negotiated with him, often paying exorbitant prices, often not getting anything at all.

His collection has long outlived him, and has essentially corroded in place.

The team putting the book together - one writer, one photographer - have given us a moment in time. And it's here that my wonderment begins. Where do you begin? There are thousands of potential images to capture, and with each burned out driver's seat, smashed windshield and crumpled fender there is a story to tell, potentially of death and heartbreak. Rebmann, the photographer, focused on entire bodies and the smallest details, down to hood ornaments. Mostly the subjects are of loss and desolation. The cars have rusted. The pigeons have left their corrosive marks. The paint has curled in the heat. Here and there an isolated intact headlight looks like the car just came off the line. The entire collection is a study in browns and grays, with occasional faded original paint jobs.

They're all here, Mercedes, Rolls, Ferrari, Aston Martin, Volvo and so many Porsches. Some belonged to celebrities. Some are one-of-a-kind. Most are beyond restoration.

Ultimately, the book shows us about 200 images of the current state of the graveyard. We're left to wonder what the authors left out.

Posted by John Galluzzo at 6:12 AM No comments:

Fire in the Sky by Gordon L. Dillow 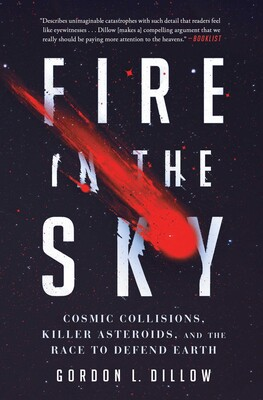 Why I Read It: I read Smithsonian Air & Space magazine cover-to-cover with each issue; a recent issue featured a conversation with the author.

Summary: The next big asteroid is coming to hit Earth. Someday.

My Thoughts: Sometimes, we just have to take a long, logical, science-based approach to life.

When boiled down to bare numbers, our planet makes sense. We understand predator-prey relationships better with math (more seals bring in more sharks; when the seal population shrinks, the sharks move elsewhere to feed). The same goes for our bodies (more calories in than expended, we gain weight, and vice versa). And the same goes for our universe.

There is a lot of activity happening well above our heads. There are innumerable natural objects already swirling around in space (not to mention the thousands of manmade satellites and other space junk we've put up there) and eventually, when trajectories finally come together at the same time in the same location, collisions do occur. So ended the tale of the dinosaurs (mostly) on Earth 65 million years ago. The author uses the following analogy to describe the impending next asteroid collision with Earth. Imagine two flies in the Superdome in New Orleans. They've got a lot of room in there to live peacefully coexistent. But the chance does exist that one day they will find each other.

The author takes us on a journey of discovery sparked by personal experience. He sees a flash in the night sky and wonders what it could have been. He visits the famed Meteor Crater near Flagstaff, Arizona, and his journey begins. He carries us though the history of the knowledge of meteors and asteroids and their known impacts on Earth, following the stories of scientists who have sought to not only understand and track giant space rocks but to predict when they might be coming our way. He tracks, too, the entrepreneurs who have attempted to gather the nickel-iron from impact fields and those companies that today are considering sending unmanned vehicles to land on asteroids to extract water from them.

He follows the logical steps. Is as asteroid capable of causing a global catastrophe heading our way? How do we know? Can we stop it? He interviews our Planetary Defense Officer (yes, there is one) and runs through the series of proposed interceptions, from blasting asteroids with everything from paint balls to nuclear bombs.

His main point is that it is going to happen. Humanity may not exist when it does, but, then again, it might. Asteroids are difficult to find, and some sneak past us, giving our planet flybys that are way too close for comfort, though most of the world never knows how close we came to real danger.

It just comes down to simple math.

Posted by John Galluzzo at 7:38 AM No comments: